On April 15 each year, every player in Major League Baseball wears No. 42 to commemorate the date in 1947 when the great Jackie Robinson heroically broke the color barrier in professional baseball, a milestone in the history of civil rights and sports in America.

But a year before Robinson first put on a Brooklyn Dodger uniform with that number and walked onto a ball field and into history, two other Bruins, who happened to once be his teammates on the UCLA football team, did something that some believe was just as courageous.

On March 21, 1946, Kenny Washington, a former star running back for the Bruins, suited up for the Los Angeles Rams, ending the National Football League’s ban that had kept blacks from playing in the league for 13 years. Sharing in this triumph was Washington’s best friend and fellow Bruin, Woody Strode, whom Washington had insisted the Rams also sign if the team wanted him on its roster. 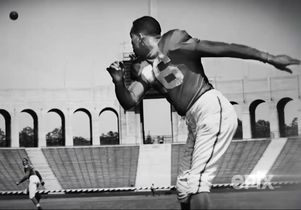 EPIX
Strode and Washington, playing with the L.A. Rams, practice in the Coliseum. They became the first African Americans to play in the modern NFL.

Yet Washington and Strode and their counterparts Marion Motley and Bill Willis, the first African Americans to play in the All-America Football Conference, remain largely the forgotten heroes of professional football, said Ross Greenburg, a 52-time Emmy award-winning filmmaker who is paying tribute to these four men in a new documentary for the cable network EPIX.

“It’s a piece of American history that no one knew about,” said Greenburg, whose film credits include sports movies like “Miracle,” about the 1980 U.S. Olympic hockey team. “There were a lot of reasons for that. For one, the NFL and the AAFC were not the predominant leagues in professional sports back then. Major League Baseball was.”

To honor the achievements of these men posthumously, UCLA and EPIX will host the Los Angeles premiere of Greenburg’s documentary, “Forgotten Four: The Integration of Pro Football,” on Sept. 9 at 7 p.m. in Royce Hall. Following a screening of the 60-minute film, a panel that will include Olympic gold medalist and UCLA alumnus Rafer Johnson,  former NFL Pro Bowl quarterback Donovan McNabb, UCLA civil rights scholar Paul Von Blum, Greenburg and moderator Los Angeles Times reporter Kurt Streeter will discuss the intersection of race and sports in America. Admission to the public event is free.

The film, said Von Blum, a UCLA senior lecturer in African American and communication studies, “is a powerful and timely reminder of the need to remember the hidden history of African American accomplishments in athletics and in all fields.”

Von Blum, who worked in civil rights movement in the ’60s in the South, noted, “Long before the magnificent entry of Jackie Robinson into major league baseball, pioneering African American football players made their mark in the National Football League, setting the stage for other athletes of color, like Jackie Robinson himself, to continue the long historic struggle for racial justice in America.”

Washington and Strode will also be honored on the field. Before the Bruins play Memphis on Sept. 6, Kalai Strode, son of Woody Strode, and Karin Washington Cohen, daughter of Kenny Washington and an alumna, will take on the role of honorary captains during the coin toss.

“I think our players will take great pride in knowing that they are standing with them on the night they flip that coin,” said UCLA football coach Jim Mora, who has a photo of Washington and Strode outside his office. “I want our players to have a chance to sit down and view that film. I can tell them about the history, but I think once they watch it, it will really resonate with them.”

The film is also being shown by EPIX to NFL teams nationwide. Two weeks ago, for example, the Denver Broncos screened the film for 20,000 people who came to watch them scrimmage.

The NFL didn’t start in 1920 as a segregated sports league. Up until 1933, 17 African Americans had played in the league. But then, team owners decided to bar blacks from the field. “It was pretty obvious that George Preston Marshall, the owner of the Washington Redskins, led the charge and demanded that blacks not be allowed to play in the NFL,” Greenburg said. The Great Depression served to widen the racial rift between whites and blacks. “There was a feeling that blacks were taking away the jobs of whites … so they didn’t want that on the football field.”

Washington, a stand-out high school athlete before coming to UCLA in 1936, and Strode, a record-breaking decathlete, were star running backs who became known in Bruin lore as “the gold dust twins.” 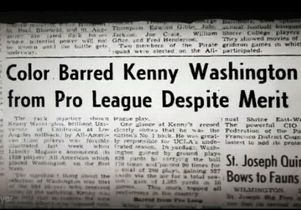 EPIX
A newspaper headline notes the NFL's rejection of Washington.

In 1939, Washington, then a senior, was named the nation’s top collegiate player. He led UCLA to its first undefeated season and played in the College All-Stars Game against the Green Bay Packers. But while almost all of his All-Star teammates signed with the NFL, Washington was not picked, even though Chicago Bears coach George Halas tried to convince NFL coaches to lift the ban on black players for the Bruin star.

Instead, Washington joined the Los Angeles Police Department and played on semi-pro teams, like the Hollywood Bears, a team that Strode also joined. With the end of World War II, the country began to realize that if African Americans could fight and die for the country, then they deserved equal opportunity, Greenburg said.

In football, that came with the formation of the All-America Football Conference in 1946 and the founding of the Cleveland Browns, which spurred the Cleveland Rams of the NFL to move to Los Angeles. When the L.A. Rams needed a lease to play in the Coliseum, a group of black sports writers and Roger Jessup, a member of the Los Angeles Coliseum Commission, urged the commission to let the Rams play there on the condition that at least one African American be on the team. With that, Washington joined the Rams, breaking the NFL’s 13-year color barrier along with Strode, whom Washington insisted join the Rams as his teammate.

In the Midwest a few months earlier, Motley and Willis had signed with the Cleveland Browns and made their debut in the AAFC on Sept. 6, 1946.

But while they were allowed to play, Washington and Strode were often targets for bruising play on the field by opposing players as well as teammates from the Deep South who “didn’t understand why they had to cohabitate with black football players,” Greenburg said.

“In football, on every play, if you’re a running back like Motley, Washington or Strode, you can get pounded on the ground and beaten up,” the film producer said. “So they suffered on the field. We heard stories about Kenny Washington where he was just battered throughout the entire football game.”

In the end, Strode played with the Rams for just one season. Rams owner Dan Reeves objected to Strode’s interracial marriage and made it difficult for him to succeed on the field, Greenburg said. But Strode had better luck in Hollywood where he became a successful actor in such movies like “Spartacus.”

Washington ended his football career three years after breaking the color barrier when his knees finally gave out, Greenburg said. Neither Washington nor Strode have been elected to the Pro Football Hall of Fame, but Motley and Willis, who had longer careers, were.

None of the four players expressed bitterness about the fact that their breaking of the color barrier in professional football has been largely forgotten, Greenburg said.

“They were very principled men with supreme character,” Greenburg said. “They created close-knit families. They never felt they needed to be propped up as symbols of racial equality.”

Coach Mora said he has not forgotten what Washington and Strode stood up against. “I know what they did for the NFL, and I know their legacy here at UCLA.”

The fact that three African American athletes from UCLA — Robinson, Washington and Strode — changed the sports culture in America forever sets a standard of achievement that Mora wants his players today to live up to.

“There’s a very pioneering spirit here,” Mora said as his players came in from a tough practice on Spaulding Field. “We are always looking to break barriers. That’s what UCLA is all about. We don’t judge people on race, religion or gender — we judge them on achievement and attitude. For the young men who are here, who may face struggles in their own lives, they can say, ‘You know what? I can make it. I can achieve. I can go places where no one else has been.’”

To attend the Sept. 9 screening and panel discussion in Royce Hall, register by Sept. 3. A media advisory can be found here. Watch the film's trailer below.