The former city leaders, who represented 20 consecutive years of mayoral leadership in Los Angeles, came together at Feb. 16 in Schoenberg Hall in a panel discussion moderated by Jim Newton, a former journalist at the Los Angeles Times and current lecturer in the UCLA Luskin School of Public Affairs. During their talk, the mayors also discussed the city’s role in a charged political climate.

They all agreed that Special Order 40, the law that often is used to describe Los Angeles as a sanctuary city, because it prevents city police from stopping or arresting people over suspicion of their residency status, continues to serve a valuable purpose for the city’s public safety, which is it’s original intent. It is necessary for a place that serves as an “epicenter” of immigration, Villarigosa said.

“Special Order 40 dates back to 1979,” Hahn pointed out. “if the purpose of a police department is to prevent and solve crimes, then it’s important they have access to witnesses and victim accounts of crimes. Making undocumented residents feel safe in their interactions with police, makes our city safer."

Riordan lamented that one part of the proposition has never been efficiently implemented — that of deporting criminals post-conviction if they are undocumented immigrants.

The discussion called “Why History Matters: Mayors Past on the Present and Future of Los Angeles,” served as a forum to celebrate a recent $5 million gift from Meyer and Renee Luskin to the UCLA history department, establishing the Luskin Center for History and Policy.

“In the coming years, the center’s faculty, students and partners will seek to challenge the historical amnesia that for too long has led to poor choices on the parts of policymakers,” said professor Stephen Aron, chairman of the history department at UCLA.

David Myers, professor of history and Jewish studies, will head the center. “We begin this initiative in a difficult time, at a moment of anxiety and trepidation. This lends our efforts an added sense of urgency and relevance and we are we are fortunate to have the indefatigable support and remarkable vision of Renee and Meyer Luskin.”

“All three of these individuals served with great distinction and have quite a bit to say for their terms as mayor of los angeles,” specifically calling out Villaraigosa’s tenacity in pushing expanding the city’s transportation infrastructure, Riordan’s leadership after the Northridge earthquake and Hahn’s decisions to oppose Valley secession efforts and to replace Bernard Parks as police chief with William Bratton after the Rodney King and Rampart police scandals. All the panelists, including Hahn, pointed out that those two decisions, while ultimately best for the city, cost him re-election.

Riordan, the only (self-described moderate) Republican of the trio, mulled whether California will always be a “blue state” and wondered whether the current state Republican party can rebound.

“The best we can hope for is anti-union Democrats,” he said.

But Villarigosa isn’t so sure. He thinks the pendulum could swing back one day.

“I’m not a partisan warrior,” he said. “Fixing potholes and fighting crime aren’t Republican or Democrat issues and I think most people in California can be found in a very wide center." 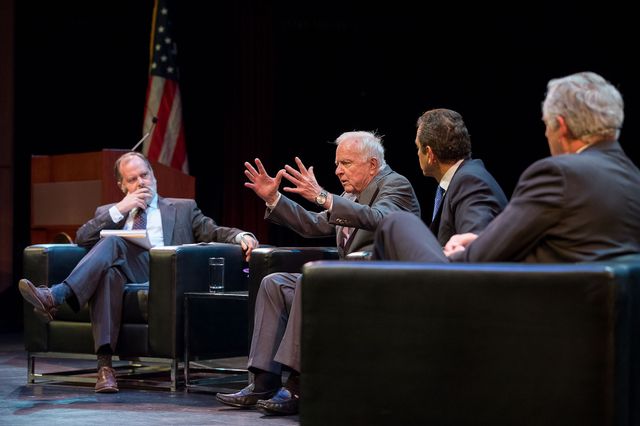 Reed Hutchinson/UCLA
Jim Newton’s discussion with Riordan, Villaraigosa and Hahn served as a forum to celebrate the establishment of the Luskin Center for History and Policy.

Riordan disagreed with Hahn and Villaraigosa with regard to the uptick in development and what he called gentrification, pointing out that the current housing crisis in Los Angeles is pricing out the middle class from the city, and the impact on traffic and gridlock.

Villaraigosa said smart planning and investments are what’s needed, with strategic development along transportation routes, like other major population-dense cities have. He opposes Measure S, which is on the March 7 ballot and would put a two-year moratorium on some development projects.

“I just don’t buy the idea it is already too easy to develop in this town," he said. “We were the quintessential city of sprawl, we created jobs in the inner corridor and all the housing in the outer corridor and that was a recipe for disaster. We see it every single day."

Look at other major cities, where people live and work around transit stations, where building is happening all the time, where density bonuses in projects can help create affordability, Villaraigosa continued.

Hahn lauded Villarigosa’s recent efforts around the Metro expansion, recalling a day in 1962 when his father took him to ride the final route of the red car from downtown to Long Beach.

“I remember he said ‘Jim, we have a perfectly good urban railroad here and we are throwing it away, but mark my words, it will have to come back one day,’” he said. “And now, I enjoy taking the Expo Line thanks to Mayor Villarigosa and others who got that built, from Santa Monica to Downtown.”

He good-naturedly ribbed Mayor Riordan for his lament over how long it takes to drive anywhere in L.A.

The event took place on the 100th anniversary of the birth of Tom Bradley, largely considered by the public, and definitely by the evening’s distinguished guests, to be one of the city’s greatest public servants.

Newton also wondered whether Villaraigosa might be able to make history and be the first Los Angeles mayor to win the governorship of California.