Sequoia Thompson recalls watching the sun rise day after day as she drove the Metro No. 2 bus along Sunset Boulevard from downtown Los Angeles to Westwood. When Thompson would pull into UCLA, she would park the bus and walk to Ackerman Union to get something to eat, envious of all the people she saw on their way to lectures and labs.

“It was so hard because I really wanted to go back to school,” said Thompson, whose educational career got sidetracked by working through gender identity and sexuality issues, uncertainty about studying psychology and working to support herself financially. “I thought my life choices had made it impossible. UCLA was something that I didn’t even think was possible for me.”

But after working several years in a variety of jobs, Thompson made it to UCLA. The now 33-year-old is on course to graduate June 15 with a bachelor’s degree in psychology and a minor in LGBTQ studies.

“I’m really passionate about working with queer black youth because for me it was difficult coming up,” said the aspiring clinical psychologist, who speaks openly about her experience as a non-traditional student and a black androgynous lesbian woman, and leads a bi-weekly discussion circle at the UCLA LGBT Campus Resource Center for queer and transgender people of color. Her life experience, something she once thought of as shameful and of little value, has proven to be the nexus of her professional life.

As a high school student, Thompson enjoyed learning and wanted to go to college but her grades suffered as she worked to understand the woman she was becoming.

“I was battling with my identity as someone who loved women, but growing up in a very religious household that was not OK,” Thompson said. 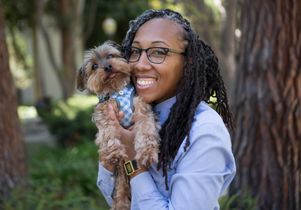 Thompson grew up in a Christian home, attending Sunday school and singing in the choir, accompanied on piano by her grandmother. She didn’t realize homophobia and misogyny existed in religion until she was late in her teens. She said she struggled with the concept of female beauty and not wanting to dress “like a girl,” much to her mother’s disappointment. She also struggled with the idea of women being subservient to men, accepting gender-based roles and seeking the approval of men. Once she came out as lesbian, conversations with certain family members and church friends often seemed to get redirected toward her sexuality and their subtle and not-so-subtle disapproval.

After finishing high school in the Inland Empire east of Los Angeles, she got a full-time job with FedEx in nearby Bloomington, but her inner scholar remained restless.

She loved the idea of studying human behavior and learning more about why people think and do what they do. To satisfy her curiosity, Thompson enrolled in a psychology class at Chaffey College in Rancho Cucamonga. However, lack of adequate transportation made it difficult to travel the 18 miles between work and school. “It’s not that it was inconvenient, it was just not possible for me to do both without a car.”

This internal battle between school and work consumed Thompson for the next several years as she tried to figure out how to manage both and make it work efficiently. She also questioned whether psychology was a good choice for her and if she would ever be accepted in the African-American community as a therapist.

“Generally speaking, we’re told that we need to stay strong and not really talk about our feelings,” Thompson said. “Homophobia is strong within the African-American community, as well. I was just like ‘Well, I’m gay, I’m androgynous and I want to be a psychologist? Yeah, right.’ I didn’t feel like there was a place for me in that business.”

So for the next several years, Thompson worked as a FedEx package handler and became the first female facer — someone who directs the outbound packages to the trucks — at her worksite. Then she became a yard switcher, backing up hostler trucks to big rigs parked at the terminal, then a switcher at Union Pacific Railroad.

After being laid off during the recession she landed a part-time job as a bus driver with Metro, the regional transit agency in Los Angeles, and waited patiently for full-time hours. When this didn’t happen as quickly as she’d hoped, she took it as a sign that a return to school was in order.

“I was just about to enroll, but then I got promoted to full-time and I just didn’t know what to do,” she said. “I chose the full-time job and did that for a few years, but I just wasn’t happy.”

Thompson developed tendinitis in her shoulder and went on disability leave after a few years as a driver. It was then that she enrolled in a class at Pasadena City College and put her education in drive.

“The decision to sacrifice my financial security to pursue my passion in psychology has been the most rewarding decision I’ve ever made,” Thompson said.

Thompson graduated with honors from Pasadena City College in 2016, giving the student commencement speech at the college’s African-American transfer celebration, and transferred to UCLA that fall. Appreciative of all the support she received at PCC, and with a desire to help others achieve the same success, she has continued to serve as a transfer student peer counsellor there while attending UCLA, sharing her experience with students interested in transferring and helping them find the resources they need to be competitive applicants to four-year colleges and universities, fund their education and transition as incoming students.

“Because I had people to lay that foundation of inspiration, motivation and support, I have to pay that forward any way I can — if I can,” Thompson said. “So many people are just sitting on their potential, and all they need is someone to just support them.”

At UCLA, Thompson has been an asset to the Center for Community College Partnerships, said Santiago Bernal, the center’s assistant director. Bernal, who works one day a week as a transfer student advisor at Pasadena City College met Thompson when she was a student there.

He said that although Thompson hadn’t initially considered UCLA to be realistic opportunity for her, he convinced her otherwise. “I think her hesitation was partly because she was an older student and she thought of UCLA as a young person’s playground,” Bernal said.

Specific features of UCLA that were aligned with Thompson’s interests and needs as a scholar, said Bernal, were UCLA’s LGBT Campus Resource Center, its LGBTQ studies and African-American studies programs, and its transfer student center and Bruin Resource Center that would make the transition to UCLA easier.

“I also knew that she was interested in global issues, so I also told her about this great program that she needed to apply to,” Bernal said.

The opportunity he was referring to was a student exchange program for first-generation and low-income college students offered by UCLA’s Academic Advancement Program. Now in its eighth year, the program sends students to The Netherlands for six weeks each summer to study at the Vrije Universiteit Amsterdam and learn about social justice issues from a global context.

Thompson took his advice and was selected to participate in this study abroad opportunity. While there, she took classes and conducted research exploring how Dutch colonial history affects queer people of color in Amsterdam and how that compares with American colonialism and its impact on queer people of color in the United States. She interviewed LGBTQ people of color to learn about their attitudes and experiences, spoke on panels hosted by the University of Amsterdam and community organizations that work with people who are LGBTQ, and networked with local LGBTQ artists. Due to her research and community involvement, an online community called Queer People of Color Community of Care was created to keep an international dialogue open with those individuals she connected with.

“That experience changed my life,” Thompson said. “It really allowed me to really embrace my purpose and feel fearless. I’d never felt like that. My research being embraced accepted was so validating.”

On the UCLA campus, Thompson has also participated in a variety of panels and summer programs organized by the Center for Community College Partnerships, sharing her experience as a non-traditional student, particularly one who returned to school after the age of 25, spoken about her academic research, and encouraged transfer students to study abroad.

“For me, she’s become the perfect scholar that we want at UCLA,” Bernal said. “I think this is someone we’re going to be hearing from in the future, particularly in the field she has chosen.”