Hard to believe it has been 30 years this month since UCLA was transformed into an international Olympic Village, when residence halls housed more than 4,000 people, Bruin Walk bustled with activity and more than 160,000 spectators roared at Pauley Pavilion.

In 1984, Los Angeles hosted the Summer Olympic Games, and Westwood became an international athletic mecca. The Los Angeles Tennis Center,near Pauley Pavilion was built for the occasion and was home to sold-out tennis matches, and the John Wooden and Sunset Canyon Recreation centers held gymnastic competitions. Both the Wooden and the tennis centers were conveniently finished right before the games kicked off. And Los Angeles caught Olympic fever. 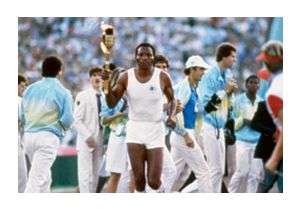 UCLA
Gold medalist Rafer Johnson, a 1959 UCLA graduate, carried the Olympic torch into the Memorial Coliseum at the opening ceremonies.

That summer, the campus took on a festive look, with the flags of nations lining up along the intramural field. Ceremonies took place daily at the foot of Bruin Walk, and Drake Stadium was surrounded by a strip of concessions and shops. For the Los Angeles games, the branding team wanted the whole experience to embody the culture of Southern California and stray away from the conventional red, white and blue Olympiad look. For a couple of weeks, UCLA’s colors were blue and gold, plus brights like aqua, magenta and tangerine.

But UCLA’s contribution to the Summer Games went beyond just serving as a location. The Olympics brought a great civic revival to Westwood and the entire city of Los Angeles.

It was UCLA athletic legend and 1960 decathlon gold medalist, Rafer Johnson, who carried the Olympic flame into the Memorial Coliseum at the opening peremony. And with a grant from the Los Angeles Olympic Organizing Committee (LAOOC), UCLA Professor Emeritus Dr. Don H. Caitlin founded the UCLA Olympic Analytic Laboratory, the first facility in the country where athletes were tested for performance-enhancing drugs. Since then, the laboratory has continued to offer services for Olympic events nationwide, such as the Summer Games in Atlanta in 1996 and the Winter Games in Salt Lake City in 2002.

In the summer of 1984, UCLA athletes did not stack up air miles traveling, but they did go far in the Olympics in showcasing the big talent pool emerging from the school. Bruin athletes won 37 medals: 17 gold,14 silver and six bronze. And in track and field, Bruin Evelyn Ashford set the Olympic record in the 100-meter at 10.97 seconds.

“Our participation in the Olympics will enable us to show the world what UCLA is like and to tell the world about UCLA’s academic program,” said Norman P. Miller, former vice chancellor for student and campus affairs, who was appointed director of UCLA’s 1984 Olympic Games Office.

The Olympic Games and UCLA showed a sense of unity and established a strong bond for a lifetime, and the summer of 1984 was one to remember. The LAOOC headquarters still stands, later renamed the Peter V. Ueberroth building in honor of the committee’s president.