Non-academic jobs were once considered plan B for students like Nicole Robinson. As a UCLA graduate student in Italian literature, Robinson studied the writings of modernist women exiled under Italian fascism.

“I didn’t go get a Ph.D. to cure cancer — I did it to delve really deeply into a subject,” Robinson said. “I was probably, for a brief while, the world’s leading expert on my topic.”

But she was also a leader of the UCLA Graduate Student Association and found the practical, collaborative problem-solving associated with those responsibilities to be just as engaging as her academic research.

When it came time to enter the job market, she said, “I looked at all that would be required of me if I wanted to get a job as an Italian scholar. When I weighed that against the excitement and benefits of a job outside of academia, it just didn’t pencil out.”

Today, Robinson, who was awarded a Ph.D. in 2016, holds a job she loves: management consultant at McKinsey and Company, where her graduate study has proved surprisingly relevant.

In making the transition to the private sector, Robinson got support from Humanists@Work, a UC-wide association of graduate students looking to explore non-academic careers. Started in 2014 with a grant from the Andrew W. Mellon Foundation, the organization hosts online forums, conferences and networking dinners for those with ambitions extending beyond the ivy walls. The effort is an initiative of the UC Humanities Research Institute, which aims to connect research in the humanities to public life.

It's part of a growing effort on UC campuses to support Ph.D. students in exploring non-academic careers and to connect the wealth of talent emerging from the university’s graduate programs with California industry’s needs.

As a humanities scholar, Robinson said, “what we do is look very closely at something tiny and see how it relates to something big.” Now, rather than spending six years on a problem, the UCLA alumna tackles a new issue every few weeks. “It could be anything: work for government, nonprofits, the Vatican. I don’t have to worry about things getting stale. I always have the opportunity to hit ‘refresh.’”

Going where the jobs are

UC has begun collecting placement data on where its Ph.D. graduates end up and has found that 42 percent of recent doctoral graduates go on to teach at four-year institutions, 2 percent teach at community colleges, and 5 percent go to national or university research labs. The other 51 percent leave academia for other kinds of careers — whether in the arts, public service or something else. Nearly one-quarter of UC’s newly minted Ph.D.s land in private industry.

Once considered a fallback option to the holy grail of a tenure-track university position, these "alternative" jobs are now being seen as equally attractive by many grad students; these positions offer greater flexibility about where Ph.D. graduates want to live, what they want to do and the flexibility to change career tracks as they progress professionally.

But making the leap can be difficult.

In today’s complex global marketplace, Ph.D. students bring both aptitude and ability when it comes to tackling big questions, thinking creatively about solving problems and finding approaches that no one else has tried.

What they may lack is a familiarity with workplace culture and the range of career possibilities open to them. Many struggle with how to market themselves to potential employers and how to translate their expertise in a narrow research niche to the broader abilities the workforce needs.

“Grad students have tons of great, hard-to-get skills and expertise,” said UC San Diego chemical engineering Ph.D. student Lindsay Freeman, who helped start Humanists@Work in response to student demand. “What they are often lacking are the soft skills industry wants to see: things like communication, teamwork, and time and project management — skills local businesses reported they were looking for.”

A change in perspective

Graduate education has traditionally focused almost exclusively on preparing Ph.D. students for academic careers. But academic departments and chairs are starting to take notice of the need to prepare their students more broadly. 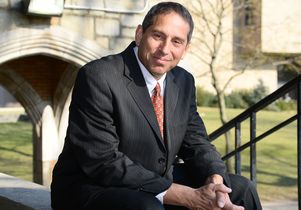 UCLA history department chair and professor Stephen Aron is among them. He tracked where the department’s Ph.D. students ended up, and the results surprised him. Only 17 percent landed in the four-year, research-intensive universities on which their training was focused.

“If only one-sixth of your graduates are getting the positions you’ve prepared them for, something is amiss,” Aron said.

He has begun to reframe the curriculum so students can explore a wider range of career paths. He and the department's graduate career officer Karen Wilson developed a graduate seminar called, “The Many Professions of History,” so that students can hear from Ph.D.s about their jobs as varied as museum curator, government historian and intelligence analyst.

As part of the class, students work on a project to take a piece of UCLA history and bring it to life through podcasts, installations, oral history or other means.

“If you think about the skills history gives you, it’s not simply that you know on what date something happened. It’s that you can digest and synthesize complex information. It’s that flexibility and adaptability that come from thinking across cultures and across time,” Aron said.

Many students find it hard to frame their work expertise honed over years in the lab or the library in a way that outsiders or job recruiters can understand. So UC recently developed a systemwide contest to help grad students learn to do just that. Known as Grad Slam, the contest challenges students to present their research in three jargon-free minutes. 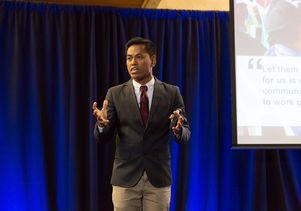 At UCLA where the competition has been held annually since 2015, Grad Slam, hosted by the Graduate Division and Graduate Student Association, has been under way since April 11. Twelve finalists will be competing Tuesday, April 25, to determine the first, second and third place winners, who will receive fellowships.There's even an Audience Choice award in the amount of $500. The Grad Slam final, to which the public is invited, will be held from 5 p.m. to 7 p.m. in the CNSI Auditorium.

On May 4 in Sacramento, the UCLA champion will be vying with Grad Slam winners from other UC campuses for cash prizes, along with training in public speaking and research communication.

Other efforts are also helping graduate students learn to market themselves.

Staff at the UCLA Career Center are preparing for an all-day career development conference, the largest of its kind in the UC system, on May 4 in Ackerman Ballroom that will put more than 500 UCLA graduate students and postdocs in touch with more than 100-plus advanced-degree alumni and employers to explore careers, develop professional skills and prepare for the future. The event is co-sponsored by the Graduate Students Association and the Graduate Division. The career center also offers a series of professional development workshops for graduate students and postdocs in many different fields.

Humanists@Work also hosts professional résumé workshops that teach students to frame their academic experience in ways that will resonate with employers. Students also get a crash course on workplace terminology.

"They learn things like what is program development versus project management versus product management; and [the difference between] external relations versus external affairs," said Humanists@Work director Kelly Anne Brown. "It can be like a foreign language."

Finding a calling over the salad course

Another challenge: how to help students build the professional networks that can lead to great opportunities.

Brown throws elaborately orchestrated networking dinners to help students make those kinds of connections. Participants describe the dinners as a wedding reception with musical chairs: Students sit down to a meal with Ph.D. alumni from a variety of professions. After every course, the alums switch tables. At the end of the event, the students have made a number of professional connections — and gotten a better sense of the possibilities open to them.

“They see that they have worth and value in the professional world,” said Brown. “They feel like they have real options.”

Programs like these provide students with support for what can be a hard decision: to leave an environment to which they have spent years being dedicated — body and soul.

“When I decided to change tracks, I went through a bit of a mourning period,” Robinson said. “There is something very identity-based about being a Ph.D. It is hard to think, ‘A big part of who I am right now is going to be something else.’”

Robinson has continued to stay involved with Humanists@Work, and now mentors others who are wondering what possibilities lie beyond campus boundaries.

“Looking back, I can say with absolute certainty I made the right choice,” said the UCLA alumna.