In a tiny lab near Daniel Blumstein’s office in the UCLA Department of Ecology and Evolutionary Biology, stuffed animals are on display. Not the cute and cuddly kind, mind you, but the formerly alive kind. One of them — a groundhog — is the product of an impromptu wildlife expedition undertaken some years ago by Blumstein and his wife on a rural road in Kansas.

The professor had spotted the groundhog on the side of the road and quietly approached the animal, who appeared to be foraging for food. Blumstein thought he had found a perfect specimen to observe; as he got closer, however, he realized why the groundhog had not run away. It was dead.

So Blumstein and his wife, Janice — an academic coordinator for the UCLA Department of Chemistry and Biochemistry — did what any couple would do in that situation: They took it home and stuffed it. "Two-Buck Chuck" now stands proudly on a shelf in Blumstein’s lab, next to an empty bottle of WhistlePig whiskey (“whistle pig” being another name for groundhog). 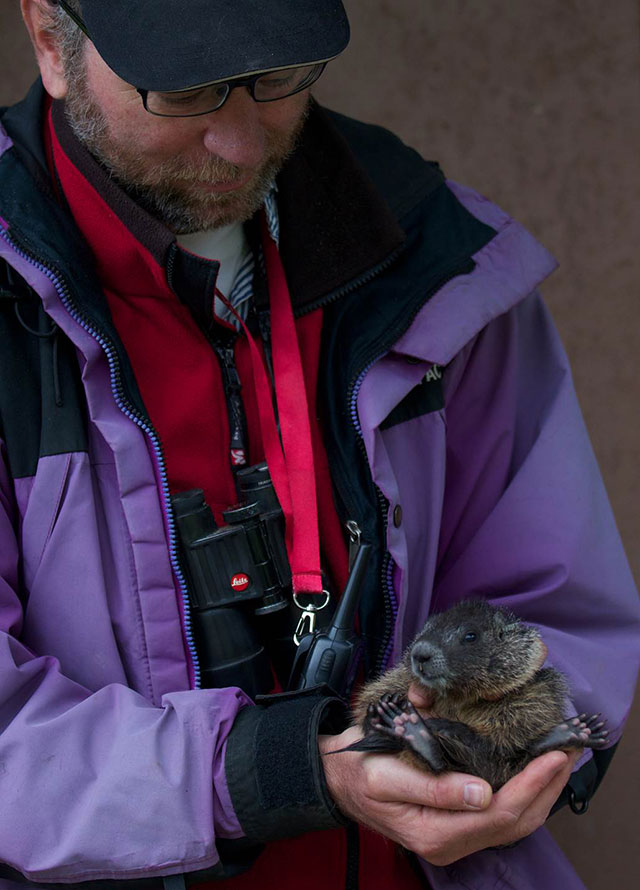 Such an experience is not unusual for a man who gathers each Groundhog Day “with science geeks at my UCLA lab to nibble, schmooze and revel in ground-hoggery in all its magnificent splendor,” Blumstein said in an article for Zócalo Public Square in honor of Groundhog Day 2017. That kind of devotion to his cause was one of the reasons why he was selected to receive the 2017 Gold Shield Faculty Prize, a $30,000 award given to a mid-career faculty member with extraordinary achievement in teaching, research, creative activity and service to the university. Past winners of the prize — presented annually by Gold Shield, Alumnae of UCLA — include Andrea Ghez (physics and astronomy), David Gere (world arts and cultures), and Neil Garg (chemistry and biochemistry).

In his 16 years at UCLA, Blumstein has received only the highest marks from his peers, who praise his creativity and collegiality in teaching and his groundbreaking research skills.

“Dan clearly loves his work and his entire field of study, and that comes across clearly and convincingly to the students! It is no wonder that they follow him into his lab, gaining research experience in a field that has been made exciting and challenging,” said fellow UCLA biologist Peggy Fong, in support of Blumstein’s nomination. Added Andrew Sih, an environmental scientist at UC Davis: “Dan is a star at the national/international level.”

Blumstein’s students — undergraduates, graduate students and postdocs — give him exemplary evaluations, with a typical mean instructor score of 8+ on a maximum scale of 9. Said one student: “I like that he gets straight to the point when giving feedback and is serious about work, but knows when to lighten up as well. He’s like the Gordon Ramsay of ecology, and I mean that in the best way (referring to the multi-Michelin-starred chef and host of several food shows on FOX). He can be intimidating, but he challenges us to get the best out of us.”

A leader in the field of conservation behavior, Blumstein has spent much of the last 30 years studying the evolution of social and antipredator behavior in animals. His work takes him to the Rocky Mountain Biological Laboratory in Colorado, where he observes the complex communication and social behaviors of yellow-bellied marmots (large, burrowing rodents). Blumstein’s next book, “Ecotourism’s Promise and Peril: A Biological Evaluation,” comes out in August.

“I think it’s wonderful that academic excellence is supported and honored and celebrated, both by the [Academic] Senate and by active alumni,” said Blumstein of the Gold Shield prize. “It’s great that UCLA has awards like this. I feel extremely grateful to be the recipient, and humbled when I look at the achievements of previous recipients.”