Last Saturday, Marcia Gomez boarded a bus headed for UCLA with her son, Jonathan Abrego, after getting just four hours of sleep. She had gotten home in Koreatown at 3 a.m. after completing her night shift as a janitor at the executive offices of Wells Fargo in downtown Los Angeles.

But losing sleep was a small sacrifice to pay, Gomez said. Like thousands of other janitors who clean the skyscrapers of Century City, Warner Center or downtown Los Angeles long after all the bankers, CEOs and brokers have gone home, her main worry is about her child’s future.

“After 24 years of working the night shift in property services, I’m used to getting very little sleep,” Gomez said. “I’m up every morning to make sure my son gets off to school. I always encourage him to continue his education. It’s so important.”

Gomez was one of 60 parents and children from the Pico Union neighborhood of Los Angeles who toured the UCLA campus as part of the new Parent Worker Project, run out of the UCLA Labor Center in partnership with SEIU United Service Workers West/Building Skills Partnership. The project, funded by the W.F. Kellogg Foundation, helps janitors become effective advocates in their children’s education, starting with pre-school through third grade.

The UCLA trip was one of the first activities for parents in the program, which brings together janitor-parents from the same neighborhood, inspires them to become more active in their children’s education and trains them in school advocacy. 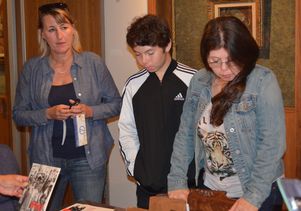 UCLA
Marcia Gomez and her son, Jonathan Abrego, look at photos during a visit to UCLA Special Collections. Looking on is Janna Shadduck-Hernandez, UCLA Labor Center director who is leading the Parent Worker Project.

With no time to waste, the 45-minute bus ride to UCLA was just the opportunity Juan Carlos Venegas of Building Skills Partnership needed to give parents information about the a-g subject requirements that high school students need to complete to qualify for admission to a University of California or California State University campus. Then came a lively question-and-answer session when parents asked how they could best support their children to apply to college and be successful students.

“The best way for urban schools in low-income communities to improve is for parents to get involved,” said Janna Shadduck-Hernandez, UCLA Labor Center project director. “And what better parents than janitors who are already active in their workplaces?  We’ve done research that shows that parents who have been involved in their unions or communities are much more likely to be involved in their child’s schools. Through this program, we are aiming for parents to take the lead in their children’s early education, which will lead to higher high school graduation rates and college enrollment.”

The Parent Worker Project focuses on families residing in many of the poorest and most underserved neighborhoods in the city, with overcrowded, low-performing schools and many residents living up to 200% below the poverty line. The program teaches janitor-parents who have children at the critical early childhood development ages of 3 to 8 years old to become parent leaders, who can voice their interests and concerns for their children in school.

The idea is to create a ripple effect — with parent leaders educating other parents, who will in turn reach out to even more parents, program organizers said.

Leading the group on a tour of the campus were UCLA students Brianda Anguiano, Eida Hilo and Reyna Orellana from Shadduck-Hernandez’s Labor and Workplace Studies course. Students Ana Dávalos and Jaquie Díaz, members of the student group MEChA, later led a UCLA Students of Color tour, which pointed out key historical sites, including the top of Janss Steps, where the Reverend Martin Luther King Jr. addressed thousands of UCLA students in 1965.

There was also a stop at the Charles E. Young Research Library where artifacts from the Justice for Janitors campaign are housed in UCLA Library Special Collections. There, the janitors looked at historic photos of workers, not unlike themselves.

Parents were urged to take advantage of the incredible resources at the UCLA campus.

“The beautiful thing about UCLA is that it is a public university, and its campus is open to the public,” Tobias Higbie, associate professor of history, told the visitors. “The Justice for Janitors archives are open. Anyone can come to a public university to access these archives — not just current students.”

For some parents, like Gomez, this was not only their first trip to UCLA, but to Westwood. For Gomez, the trip was a spark to think big.

“I learned so much from this trip, and I want to see more parents get involved in this important project. I hope to one day see my son go to a university like UCLA,” she said.