On the mean streets of L.A., life as a cyclist is hard.

But UCLA officials are determined to make it easier on campus. “Bicycle programs are vital to campus livability,” says Renée Fortier, executive director of UCLA Events and Transportation. “By encouraging active transportation options such as cycling, we enable students, staff and faculty to participate in a healthier lifestyle choice.”

With the well-being of all Bruins driving action forward, the League of American Bicyclists ranks UCLA as a Silver Bicycle-Friendly University. A holder of that distinction since 2011, UCLA is one of just 10 schools to move up in standing over the last year. The campus earned this recognition by taking concrete steps to aid bikers and promote cycling as a healthy and environmentally friendly way to commute.

In a place like L.A., promoting biking makes perfect sense.

“Does any city in the world have a better climate and topography for bicycling than Los Angeles?" asks Richard Jackson, a professor in the UCLA Fielding School of Public Health. "Does any exercise save as much time, money and air quality as bicycling, and for almost every age group?” He stressed that UCLA is working to “move our neighborhoods and our students’ future” in the right direction — bike friendliness.

One key step toward that goal was the establishment of new bike lanes on campus. One of the newest is on Charles E. Young Drive North near Parking Lot 7. In addition, UCLA officials are advocating for more bike lanes near campus. 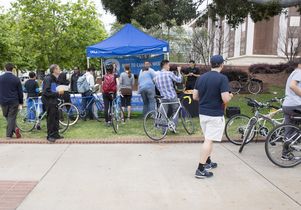 During UCLA’s yearly Bike Week, commuters are encouraged to give biking a try.

For the past five years, UCLA Transportation has hosted Bike (Re)Cycling Day, when students can enter a lottery to get a free secondhand bike that has been abandoned. The bikes may be in good working condition, need a few adjustments or consist of just frames and spare parts.

In addition, UCLA provides more than 3,000 free bike parking spaces across campus; students may rent bikes for a small fee per quarter; six do-it-yourself bike repair stands stock essential tools; and a bike counter tracks the number of cyclists passing by on Strathmore in front of Parking Structure 8. There is also an annual Bike Week to help spread the word about the resources available for commuters at UCLA.

With an estimated 3,000 Bruins currently cycling to campus, these efforts are not going to waste.

Many members of the campus community still share L.A.’s love affair with the automobile. But, says graduate student Joe Lawlor, president of the Bicycle Coalition at UCLA, “it seems that the wind is finally turning and UCLA is at the start of a bicycle renaissance.”

This story was published in UCLA Magazine.