Those who have spent time exploring UCLA know that art is an integral part of the campus landscape. From the Franklin D. Murphy Sculpture Garden and the Fowler Museum to the Rolfe Hall courtyard and Schoenberg Hall, there are ample places where the UCLA community and campus visitors can enjoy the university’s mosaics, paintings, sculptures and other objects of visual creativity.

Now there’s one more major trove of art on campus.

UCLA’s newest collection, which features about 400 unique pieces, is on permanent display throughout the new UCLA Meyer and Renee Luskin Conference Center, which had its official opening last week.

The Luskin Conference Center is designed to serve as a meeting place for the exchange of new ideas, insights and key discoveries in all fields of scholarship and exploration. Those who helped curate its art collection believe it will support that mission by inspiring innovative thinking and discussion, and fostering a better understanding of UCLA and its position as one of the world’s leading universities. 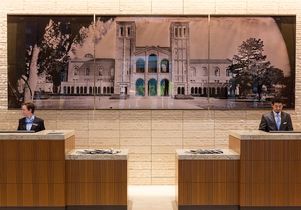 “One of the most important objectives of the Luskin Conference Center is to tell our guests the story of UCLA and connect them with greater depth and scope to the wonders of this campus,” said Peter Angelis, assistant vice chancellor of housing and hospitality services, which oversees the new conference center. “What better way to do that than through art? We start to tell that story as soon as you enter the building.”

Within the collection are nearly 60 pieces created by artists who are UCLA alumni and/or faculty members — past and present — several of whom are world-famous and have helped shape Southern California’s contemporary art scene. The artworks — which span photography, painting, giclée printing, screen-printing, lithography, photographic printing on tin, mixed media, woodcut printing and sculpture — are displayed throughout the first two levels of the building, which are open to the public.

“The conference center art is a wonderful addition to the art throughout campus,” said UCLA Chancellor Gene Block, “and I think it helps demonstrate the quality of the talent that resides on this campus.”

Among the most well-known artists with works on display are Lita Albuquerque, an internationally renowned installation and environmental artist, painter and sculptor who graduated from UCLA in 1968 with a B.A. in art; John Baldessari, who taught in an M.F.A. program here from 1986–2008 and is known for his use of appropriated imagery in conceptual art; Barbara Morgan, who graduated from UCLA in 1923 with a bachelor’s degree in art and later taught design, painting and printmaking on campus; Vija Celmins, who graduated with an M.F.A. from UCLA in 1965 and is recognized for her photorealistic drawings of natural environments; Ed Moses, who graduated from UCLA with bachelor’s degree in 1955 and a master’s in 1958 in art and became a central figure in the Los Angeles art scene for his abstract paintings; and Ed Ruscha, an artist associated with the pop art movement who taught painting and drawing at UCLA as a visiting professor in 1969. 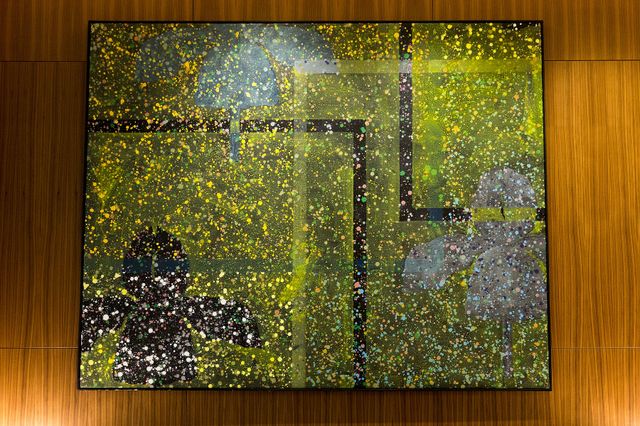 The work of Lari Pittman and Roger Herman, renowned artists currently teaching in UCLA’s Department of Art, is also showcased at the center.

“UCLA has produced some huge art-world stars, as well as attracted them to its faculty,” said Victoria Steele, an art historian and two-time UCLA graduate who helped Angelis and his team develop the collection. She serves as curator of centers, programs and collections in the Division of Humanities. “The university has one of the two top art departments in the country.”

Among them is “Powell,” a 7-foot-wide mosaic of Powell Library that Ehrlich made using close to 3,000 art slides that were once part of the UCLA Department of Art History’s now-defunct visual resources collection. With digitization, the slides outlived their primary purpose as a teaching tool, but Ehrlich has given them a second life.

“I thought it was a shame to just throw them out, and then it occurred to me that if we used those slides as the basis for a piece, it would be incredible,” Ehrlich said. 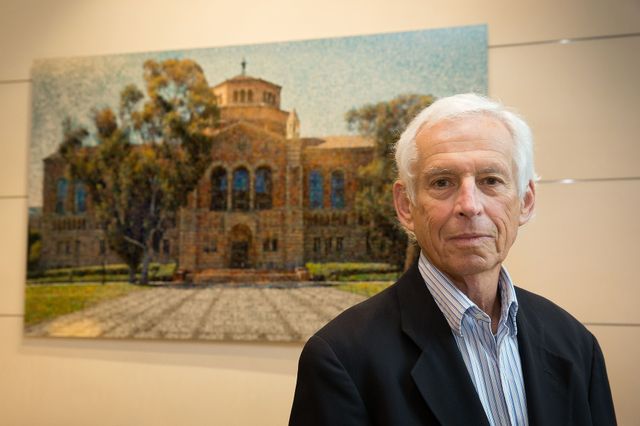 Reed Hutchinson/UCLA
Dr. Richard Ehrlich, a professor emeritus of urology and professional fine-art photographer, poses with “Powell,” one of 17 pieces he contributed to the art collection.

Ehrlich also helped spearhead the creation of a one-of-a-kind triptych photograph of Royce Hall that hangs behind the reception desk. The image, which measures roughly 18 feet wide by 6 feet tall, is mounted on three separate panels. It was shot by photographer Luther Gerlach, an expert in wet plate collodian process — a meticulous, painstaking method used in the earliest days of photography. Gerlach shot the image with a handmade 1850s-style camera equipped with a lens that dates back to the 1860s.

“Nobody has done anything in these proportions in this realm,” Ehrlich said, referring to the use of a 19th century photo process to create such a large piece in the 21st century.

Telling the UCLA story through art

The artwork on the conference center’s remaining levels, which are open to overnight guests, depict campus life, architecture, academic excellence, scientific discovery, athletics and myriad faces of world-famous people who have visited the campus over the years.

Most of these images have been reproduced from campus publications, special projects and holdings, Angelis said. Among them is a series of campus images captured by legendary photographer Ansel Adams more than 50 years ago.

Steele, Angelis and Ehrlich believe the collection will attract art lovers to the campus and inform people about the campus and some of the renowned visual artists who have been part of UCLA history.

For Steele, this collection illustrates the excellence for which UCLA is known and is something she believes will engage and excite people for decades to come.

“Part of what has always struck me about UCLA is its ambition to be so superlative in all fields, from the arts to the sciences to the humanities to medical research. It’s been really fun to be part of this project,” Steele said. “And now to see it culminate in this conference center, which we’ve needed for such a long time, is really fantastic.”