​Just before daybreak on a Sunday in April 2015, professional photographer Luther Gerlach left his Ventura home bound for UCLA. As he drove his portable studio down the 101 freeway, with his large, 1850s-style, mahogany camera in back, he thought about his assignment and the significance of the work he would do that day. His task was to shoot a photo of UCLA’s iconic Royce Hall that would dazzle and inspire visitors to the new UCLA Meyer and Renee Luskin Conference Center, which officially opened last week in the heart of campus.

His creation “Royce Hall” is an amalgam of art and science and a mix of classic and contemporary sensibilities, a perfect complement to a venue designed to draw together leading scholars and thought leaders to share different perspectives and interdisciplinary insight and produce exciting new ideas that will benefit society.

It is among the largest images of its kind in the world and is thought to be the only one of its exact size. The much smaller original image hangs on a wall in one of the building’s conference rooms.

“This antique-looking photograph of Royce Hall recalls a time when our campus was in its infancy — a new public university which would grow to become one of the world’s most impactful and respected institutions of higher learning,” said UCLA Chancellor Gene Block. “So, it is fitting that a magnificent photograph of one of our oldest and most iconic structures should hang in a prominent place in UCLA’s newest building.” 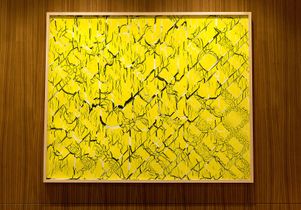 Block added that those who know the history of Royce Hall recognize its importance as a campus landmark.

“When you look at Royce Hall, at the core of our campus both historically and artistically, it’s hard not to think of all the amazing artists who have played a vital role in the intellectual and cultural life of the university,” Block said. “It’s a reminder as we celebrate our past and look to the future of the strength of our ongoing commitment to the arts as an essential part of the university and to our role as one of the nation’s premiere public arts institutions.”

The 18-foot by 6-foot piece, presented in three sections, was expertly enlarged from a 27-inch by 9-inch original ambrotype photograph and is mounted behind the Luskin Conference Center reception desk. An ambrotype is made by coating a piece of glass with a collodion and silver solution that is exposed to the image that is shot. “It’s a positive version of a negative,” said Gerlach, one of the few photographers who are reviving for contemporary use the wet collodion process, an early method of photography that was commonly used more than 160 years ago.

Gerlach, who has produced thousands of wet collodion images during his nearly 40-year professional career, said that when he first saw the enlarged image in the conference center, he was in awe of the size. “I knew how large it was going to be when I was commissioned to do this image, but seeing it that large with the resolution, the amount of detail, the exactness of it … really astounded me.”

The making of a masterpiece

In the early 1980s, Gerlach was one of fewer than a dozen so-called “wetters” in the world. Today that number is estimated to be in the hundreds, with many of them having been taught by Gerlach or someone he taught.

“If the plate starts to dry, then it no longer produces a good quality image. So everything has to be done incredibly quickly,” said Gerlach, adding that during outdoor shoots, it can dry out in minutes or even seconds, depending on the temperature. Heat posed a significant problem during the Royce shoot when temperatures started to rise by 10 a.m.

“The warmer the temperature, the faster the chemistry develops and desensitizes,” he said. The result is “fogging,” a cloudy quality that occurs when the image self-exposes due to heat.

The biggest issue for Gerlach during the “Royce Hall” shoot was a tiny bit of light that leaked into the darkroom, causing fogging on one side of the plate as he quickly worked to develop the image.

“Anytime you photograph in these large sizes, you run into challenges,” Gerlach said. “There are so many little things that can go wrong with this process that you’re just really excited when things turn out lovely.”

The image plate he produced was then sent to Digital Fusion in Culver City, where it was digitally scanned in eight sections to ensure maximum resolution. It was then enlarged and printed on half-inch-thick acrylic panels, which weigh hundreds of pounds each. To mimic the luminosity of the original glass plate, the backs of these panels were covered with a layer of high-quality pearlescent paint.

“That image could not have been done in any other photographic process other than a digital print to make it look identical to the original image as much as possible,” said Gerlach, who serves as a specialist in historical processes and technology at the Getty Museum in Los Angeles,where he’ll be leading a series of workshops and demonstrations throughout the fall. “The digital technology is amazing, and I’m blown away by what can be done. But, on the other hand, the old historical process — using the finest-grain film in the history of photography — is what you’re looking at in the original image. We’re talking molecules of silver on a plate of glass. It does not get better than that.”