Patti Taylor was working as a clinical nurse specialist in the Liver Transplant Unit at Ronald Reagan UCLA Medical Center in 2007 when she was called into a meeting to discuss a new concept: a dedicated program for injured members of the military. Taylor, who had retired from the Army Nurse Corps, quickly became involved in the program, Operation Mend, which she continues to serve to this day.

As a volunteer nurse coordinator, she meets the wounded warriors and their families when they arrive in Los Angeles, accompanies the soldiers to surgery and lends support to families during patients' surgical procedures. During their recovery, she takes care of their families — even planning birthday parties and taking little girls to tea at the American Girl Doll Store. She also makes a beautiful “quilt of valor” for each patient.

On August 28, Operation Mend, the UCLA Health System and the UCLA School of Nursing said “thank you” to Taylor by announcing that a new student scholarship as well as a new award have been established in her name. Both honors will recognize community or public service, with special consideration to service that addresses military or veteran health care, or working with active-duty military or those re-entering civilian life.

During a surprise reception for Taylor, Operation Mend founder Ronald A. Katz introduced a framed proclamation from the hospital, which noted Taylor’s dedication to Operation Mend and the military service members she serves. Marine Staff Sgt. Octavio Sanchez, one of the first patients treated by Operation Mend, presented her with the proclamation. The scholarship and the award were made possible by the Katz Family Foundation with a matching gift from the UCLA Health System.

“She has been an integral part of Operation Mend since its inception," said Katz of Taylor, "and she has a lasting place in our hearts, particularly in my heart.”

Acting Dean of the UCLA School of Nursing Linda Sarna thanked the Katz family for recognizing the importance of nursing and announced the annual Patti Taylor/Operation Mend scholarship. 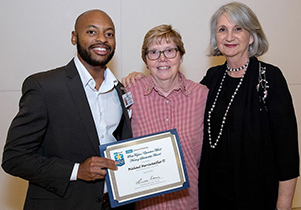 The first recipient of the scholarship was Michael Merriweather, a second-year Master’s Entry Clinical Nurse (MECN) student. Merriweather joined the U.S. Navy in 2004, just a month after graduating from high school. He served as a hospital corpsman while stationed at Camp Pendleton and then in Okinawa, Japan. He also served as a field corpsman attached to Marine Corps units during two tours of duty in Iraq as well as deployments to Thailand, the Philippines and Korea. After five and a half years of service, he decided to attend college full-time to pursue a career in direct patient care; he joined the nursing school’s MECN program in 2013.

“She is one-of-a-kind with a heart of gold,” said Crooks, “and an inspiration to all.”

It is critical, Taylor said, that nurses be involved in Operation Mend because, while the program’s doctors do miraculous things, nurses need to be there to support them as well as the patients and their families.

“Nurses have to help people,” Taylor said, “because it is our profession and our world.”

Secrets of the ‘water bear’ could improve lifesaving drugs

UCLA political scientists on how the 2020 campaign continues to reverberate