As a scientist, Steven Lopez has always insisted on practicality and logic. He likes to take this same approach with diversity.

“Many studies have shown that groups of people solve problems better when both sexes — and people from different cultural backgrounds — are in the same room,” Lopez said. “It’s not only a moral question – but also a practical one.”

Lopez, who is in his final year at UCLA before earning his Ph.D. in the Department of Chemistry and Biochemistry, says it’s these qualities that earned him the 2013-2014 Diversity, Equity, and Inclusion Award from the UCLA Academic Senate and its Committee on Diversity and Equal Opportunity.

He earned campuswide recognition as a result of his work with the Organization for Cultural Diversity in Chemistry (OCDC) at UCLA — a group of graduate students and faculty that brings distinguished scientists from historically underrepresented ethnic backgrounds to speak on campus about the career opportunities in the sciences. 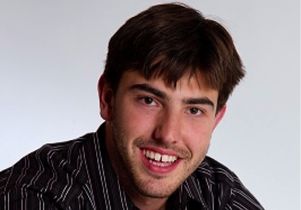 The group had only five members when Lopez arrived on campus four years ago. Its sole public event was a lecture series underwritten by Proctor and Gamble. Graduate students were in charge of planning and hosting the speakers’ trips.

Today, largely because of Lopez’s efforts, the group now boasts more than 20 members who organize lectures, host diversity events and do community outreach. Most notably, the group arranges for community college students — mainly from underrepresented minority groups — to visit the UCLA campus where they learn about research, participate in lab tours and join panel discussions on careers in science.

“Steven recognized that there could be activities that students would be willing to participate in beyond the scope of the original group,” said Miguel Garcia-Garibay, a UCLA professor of chemistry and biochemistry who founded the organization in 2006 and nominated Lopez for the diversity award. The organization has had two eras, he said: the first when it was founded and the second when Lopez joined.

“Steven has consolidated the inclusive nature of the group,” Garcia-Garibay said. “Diversity includes all of us, and Steven has been able to make the goals of the group appealing to a very, very broad student base.”

Initially, it baffled Lopez that only five students were taking advantage of this incredible networking and learning opportunity.

“It made me think,” Lopez recalled. “But in general, it’s hard to pull chemists out of their labs.” Graduate students, he noted, are told from day one that they’re in school to work. If they spend 10 minutes not working, he reasoned, “they’re adding 10 minutes to their Ph.D.”

Lopez decided to tell as many students as possible about the organization, partly motivated by his own gratitude for the guidance teachers had given him when he was young.

“I’ve always felt like I had to give back to the community that brought me to where I am,” Lopez said.

Lopez grew up in a Cuban American family in the suburbs of Fort Lauderdale, Fla., where approximately 80 percent of his high school’s student body was Hispanic. It was Lopez’s eighth grade teacher who reached out to him, gave him advice and saved him from “falling through the cracks.

“She would always ask me, ‘Why can’t you do it?’ That question has stayed with me. Sometimes when I’m unmotivated, I think, ‘Why can’t I? Why not?’ and it pushes me further.”

To expand OCDC, Lopez first tried to get friends to attend its meetings and diversity talks.

As audiences began to grow, he sought out more speakers and extended the group’s outreach. “We went from bringing two to three professors a year to bringing five,” he said. Then Lopez decided to push beyond Westwood to community colleges and underrepresented students in underserved areas, trying to raise their awareness of careers in the sciences.

“A lot of them think, ‘I have to be a doctor or a lawyer,’ because they are established professions across all immigrant groups,” said Lopez. “We just want to start opening their eyes to careers in research. We’re not going to convince them overnight, but we’re letting them know it’s an option.”

Through OCDC, Lopez believes he can become an “agent of change in the community.”

“We’ve hosted a prestigious assistant professor who grew up in East L.A. and spent time in L.A. County jail,” Lopez said. “If he can get out of jail and become a professor at one of the top universities for polymer science, then I can certainly inspire students from underrepresented minorities to enter science, where we need them.”

Lopez is also playing a key role in expanding OCDC’s influence on a national scale. The group is teaming up with Graduate Students for Diversity in Science at UC Santa Barbara to create the traction necessary to establish a national consortium for diversity in the sciences.

Looking to the future, Lopez said he wants to be a professor at a primarily undergraduate institution. The experience of working with undergraduate students at UCLA was so fulfilling, he said, that he decided to change his career goals. “I’d love to give [undergrads] hands-on training,” he said. “I want to be able to help them during that formative time.”

Ultimately, Lopez’s goal is a simple one: providing an environment in which people from all walks of life can seize the opportunities available to them.

“If I can help one person, it’s the kind of thing that keeps me up at night and wakes me up in the morning.”