A product of the foster care system in South Los Angeles until her teenage years, LeDaya Epps always struggled to find work. After graduating from high school, this mother of three bounced from job to job as a medical assistant between taking odd jobs.

Then Epps learned about the Los Angeles Black Worker Center (BWC), a project of the UCLA Labor Center. With support from other community partners, the BWC aims to tackle a major hurdle for black workers, who face nearly double the unemployment rate of the general population nationwide. 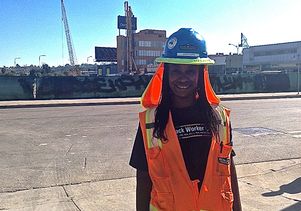 UCLA
LeDaya Epps' success caught the attention of Michelle Obama, who invited her to attend President Obama's State of the Union address tonight.

Through the BWC’s tuition-free Ready to Work program, Epps underwent job readiness training, tutoring and mentoring to help her compete for a coveted apprenticeship in construction in the Laborers International Union. She’s now part of a crew building the new Crenshaw/LAX light rail line. Epps’ success story recently caught the attention of first lady Michelle Obama, who invited her to attend President Obama’s State of the Union address tonight.

“LeDaya’s story is an incredible model for how to dismantle these barriers when community groups work together with union, employers and local agencies,” said Lola Smallwood Cuevas, director of the L.A. Black Worker Center, where UCLA students from the UCLA Community Programs Office are helping people like Epps qualify for apprenticeships.

Every Saturday morning UCLA students Ervin Rowe and Robert Jackson, both third-year transfer students, wake up early to drive down to South Los Angeles, where BWC is headquartered. They tutor Ready to Work participants for eight weeks in algebra, geometry and statistics with the hope that their students will be able to enter building and construction apprenticeship programs.

“There's a lack of resources and social networks in the African-American community to get into these good jobs, especially those that lead to long-term careers,” said Rowe, who is majoring in African-American studies and urban planning. “The Ready to Work program is the perfect setup. It’s important for the people taking these classes to have somebody they can relate to and to be able to ask questions without feeling intimidated or judged.”

Apprenticeship programs, like the one Epps qualified for with help from Ready to Work, offer one of the few career pathways open to people without college degrees, with few skills or with criminal records.

To help them compete, UCLA’s Community Programs Office, which provides funding for tutoring and mentorship, and the Black Labor Construction Council, an advisory group of union construction professionals from IBEW 11, SMART Local 105, UA Local 250 and Workforce Connections, partner in Ready to Work. Veteran construction union leaders also help participants by offering advice that ranges from how to get into the trades to how to cope with being the only black worker on a worksite. 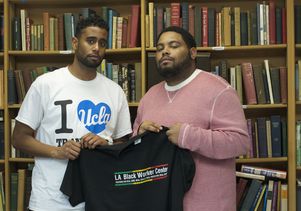 For their part, Rowe and Jackson tutor Ready to Work participants in subjects their students need to master to pass the exam.

“The program has helped me out tremendously,” said Cornell Jones, a Ready to Work participant. A Marine Corps veteran, Jones returned to Los Angeles after living in Hawaii for 21 years to care for his father, who was recovering from a stroke.

Despite his experience in several trades, including plumbing, transportation and electrical work, Jones found it difficult finding work. But his hope for finding a job in the trades, as well as his self-confidence, has been renewed because of his work with the UCLA students and other advisers.

“I was able to learn algebra, a subject I was never able to learn before,” Jones said. “Overall, the program has had a positive influence on me. It has given me the confidence to apply to more jobs in the new year.”

In its inaugural year, Ready to Work has already helped more than 20 graduates find jobs in various trades. Most have found jobs in various construction fields. A few participants, like Epps, have started to work at Kinkisharyo International building new rail cars for the expanding Los Angeles Metro lines.

“Being able to bring in students from UCLA to share their time has been great,” said Delroy Sargeant, program coordinator and a UCLA alumnus. “I like to get them out to what I call the ‘real’ Los Angeles and connect them with the community. By being engaged, they share their skills, but the experience is also an education.”

Rowe relates to the workers he tutors. Once a janitor for the Los Angeles Unified School District, he knows what it’s like to work a low-wage job and struggle to make ends meet. His experience motivates him to give back to his community and connect with others pursuing long-term careers and better jobs to support their families.

Jackson, who studies sociology and African-American studies at UCLA, grew up just 15 minutes away from the Black Worker Center. This makes volunteering even more rewarding and inspiring, he said.

“I like to let the people know that just because they are in a bad situation doesn’t mean they have to stay in that hole forever,” said Jackson. “The goal is to get folks into career paths where, ideally they are able to take care of their families and their kids. Being here reassures me that anyone can go far.”