Reciting the quote, “Life imitates art far more than art imitates life,” becomes second nature when one has studied the work of Oscar Wilde as long as veteran UCLA English professor Joseph Bristow. Yet it wasn’t until a 2012 National Endowment for the Arts seminar that Bristow began to reconsider why imitation, alongside artistic forgery, defines Wilde’s formative years, specifically in the case of Thomas Chatterton

Chatterton was an 18th-century poet who met a tragic end early in life only to be later lionized by the likes of Wilde for writing poetry under the guise of an imagined 15th-century monk named Thomas Rowley. Wilde became obsessed with Chatterton, and kept a “Chatterton” notebook, which contained portions of pages from previously written Chatterton biographies. This led scholars to consider Wilde’s notebook a work of plagiarism.

Acquired in 1952 by UCLA’s William Andrews Clark Memorial Library, the notebook remained a work of supposed plagiarism until Bristow and colleague Rebecca Mitchell, who is a lecturer in English literature at the University of Birmingham in England, began studying it. The pair concluded that it wasn’t so much that Wilde was copying and pasting biographical text verbatim into the notebook that Wilde would pass off as his own work, as he’d been accused of doing, but rather he was taking notes that would later inform his best known works.

This realization soon evolved into a book-length exploration by Bristow and Mitchell into the lives of two literary figures: one infamous, one forgotten. “Oscar Wilde’s Chatterton: Literary History, Romanticism, and the Art of Forgery” was published by Yale University Press this spring. Writer David Gunn recently spoke with Bristow about the book.

When did Chatterton first come to your attention?
Only through this. I hadn’t worked on the 18th century much, if at all, and one of the things that I had to do was to learn a great deal about Chatterton’s life. He’s born in 1752, he dies in 1770, and he’s 17 when he commits suicide. Around the age of 15 he becomes very engaged in reading a specific tradition of English poetry and a lot of medieval poetry. Chatterton was not only a great imitator and emulator of these past poetic forms but was also a great innovator from a very early age. 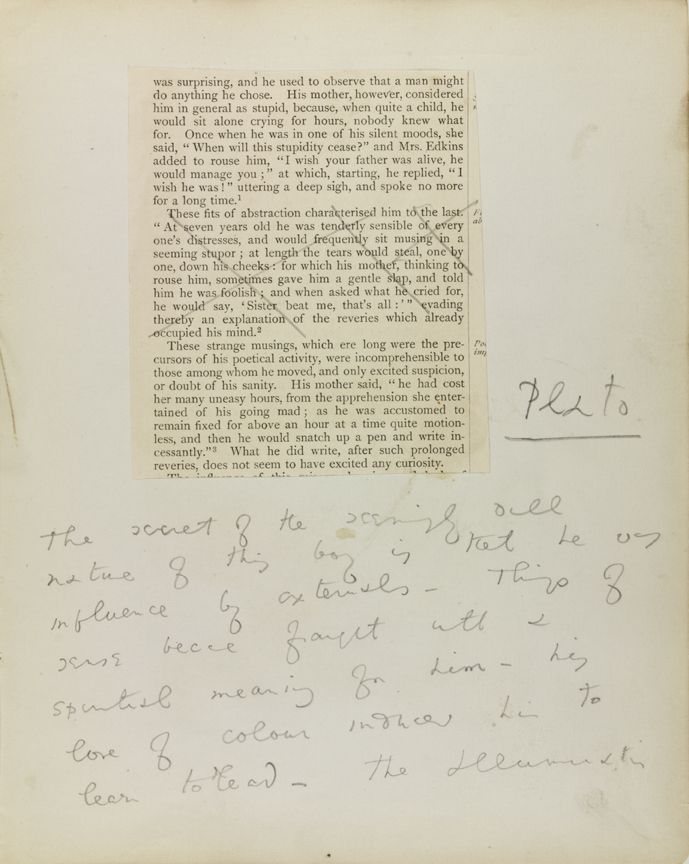 UCLA William Andrews Clark Memorial Library
Pages like this, which contain clippings of previous Chatterton biographies, have led some scholars to think Wilde plagiarized others’ scholarship about Chatterton.

And all before the age of 17.
It is astonishing. Yet Chatterton died in a fair amount of obscurity. He was buried in a pauper’s grave. Nobody quite knows where he is buried. There is no recorded image of his face, there is no portrait of him from the period, and had it not been for a couple of antiquarians who became interested in this Rowley figure, I don’t think there would have been an in-depth investigation into his life during the 1780s.

Do you see Chatterton as the father of Romanticism?
We (the authors) don’t see it, but it was the way that Chatterton was seen. By the Victorian period what you’ve got is this idea of this new movement in poetry that critics start defining as Romanticism. And people start saying, ‘Ah! English Romanticism begins with Chatterton.’ So that’s how the argument goes.

So one person says it then the other person says it then …
Yes, several important commentators start agreeing with that point, and that’s why we have Chatterton getting figured as a Romantic writer. And Oscar Wilde loved all of this, this construction of a Romantic tradition, because he saw himself as the great heir to the Romantic poets he admired.

Was Chatterton a muse to Oscar Wilde, or was he more of an inspiration to Wilde’s own theories on the art of forgery?
The second is probably the case. I think he (Chatterton) became an object of study that enabled Wilde to rethink his own aesthetic principles and encouraged Wilde to take a few more risks. It got him thinking about the ways that art does not imitate life, since it is life that is always imitating art. With Wilde, if there is going to be any imitation it is going to be life trailing after art. Forgery can actually produce perfect art for Wilde, and that is something that Wilde was working on in his later writings. In “The Importance of Being Earnest” (1895) we’ve got the young men inventing alternative identities in order to exert some kind of control over their lives. In the end the irony is that the real world is going to catch up with them and will determine who they are. But at least they are striving to become something else.

What new revelations did your and Rebecca’s research bring to light on these two artists, particularly Oscar Wilde?
I think the most important scholarly thing is that we’ve managed to shift away from the idea that Wilde was a criminal plagiarist, who was attracted to Chatterton because Chatterton was also a criminal forger, into a framework where we can see that Wilde was interested in Chatterton because Wilde could see that the forgeries were coming out of an incredibly gifted creative imagination.

What would Chatterton’s place in history be had he not tragically killed himself at an early age?
It’s very speculative about what would have happened. It’s a bit like thinking what would have happened to Oscar Wilde had he not died at the age of 46. What kind of writer might he have been? A new project I’m working on with Rebecca and another scholar is to look at the incomplete works of Wilde and to consider whether these unfinished writings give an indication of where Wilde’s career, especially in his drama, was going.

Bristow will be speaking on campus Friday, May 29 about Oscar Wilde’s contributions to 19th-century children’s literature. He organized a conference titled “Oscar Wilde and the Victorian Culture of Childhood,” which will bring together emergent and established scholars whose research has had an impact on the field. Registration required.