Kent Wong, director of the UCLA Labor Center, recently edited a new book with the Rev. James Lawson Jr., a renowned civil rights activist who worked closely with Dr. Martin Luther King Jr. and helped launch key campaigns for social justice. For generations, he has taught the principles of nonviolence to civil rights leaders, committed activists, community organizers and, in recent years, UCLA students as a guest lecturer. Published by the UCLA Labor Center, their new book, “Nonviolence and Social Movements: The Teachings of Rev. James M. Lawson Jr.,” delves into his connections to social action movements through the years and incorporates the work of UCLA students as well. Stefanie Ritoper of the UCLA Labor Center spoke with Wong about the new book. 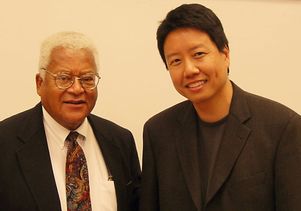 What inspired you to initiate this book project?
I have been teaching nonviolence and social movements with Rev. Lawson for the past 15 years. He has had a huge impact in articulating a historic framework in the use of nonviolence in the United States. He’s been a leading scholar who has enlightened many about nonviolence-- not only college students, but also those in social justice movements nationwide. Major civil rights books have been written about him throughout the decades, and he was extremely influential in counseling Dr. King and key civil rights leaders on the necessity and power of nonviolence.

Because of our work together and because of the influence he has had on my own life, I was very interested in trying to capture his teachings in a book.

Can you tell us about his background?
He’s been a lifelong student and teacher of nonviolence. A conscientious objector during the Korean War who spent time in prison for his beliefs, he studied nonviolence in India where he worked as a youth minister.

When he returned to the U.S. in the late 1950s, it was a time of awakening for the historic civil rights movement and the struggle against segregation and racial inequality throughout the South. In 1957, he met Dr. King, who, on the spot, compelled Rev. Lawson to move to the South to teach civil rights leaders the philosophy of nonviolence. After moving to Nashville, Tennessee, he began setting up training workshops around nonviolence. He ended up training a new network of leaders and activists who went on to play incredible roles in the civil rights movement.

For example, John Lewis, now a member of Congress, was a college student at the American Baptist College in Tennessee when he learned about nonviolence and was recruited into the civil rights movement through his relationship with Lawson. The Nashville movement was a powerful campaign that successfully challenged the policies of Jim Crow. It was Rev. Lawson who spearheaded the lunch counter sit-in movement in Nashville that challenged segregation. That campaign inspired a new generation of leaders and activists who went on to participate in the freedom rides, sit-ins and civil rights campaigns throughout the 1960s.

When did you first meet Rev. Lawson?
I’ve known him for 30 years. When I was working as staff attorney at the Service Employees International Union, there were a number of social justice activists in Los Angeles who were inspired by him. We very much looked up to him as a leader, as someone who had a wealth of experience and knowledge with regards to nonviolence and the ability to build and sustain social justice movements.

I was part of a study group that met regularly with him at his church, Holman United Methodist Church in Los Angeles. The “Holman group,” as we called ourselves, included Antonio Villaraigosa, who went on to become mayor of Los Angeles; Gilbert Cedillo, who was later elected an assemblymember, state senator and city councilmember; Karen Bass, now a member of Congress; Anthony Thigpen, who went on to run California Calls; and Maria Elena Durazo, former head of the Los Angeles County Federation of Labor. We were all getting our start in our careers and really valued the counsel and advice of Rev. Lawson, who always generously shared his thoughts and insights. He challenged us to think about being more strategic about our work, to embrace the philosophy of nonviolence, and to find opportunities to deepen and sustain social movements.

Was he connected to other movements as well?
He was. His work in Los Angeles is less well-known. What’s exciting about the book is that, while it begins with an explanation of his teachings on nonviolence, it also calls attention to his role in major nonviolent campaigns on the West Coast.

For example, the grape boycott of the United Farm Workers of America and the civil rights movement both took place in the same decade, in the same historical context. Both were trying to apply the philosophy of nonviolence to the U.S. experience. Although Rev. Lawson was not on the West Coast, his congregation in Memphis actively supported the grape boycott campaign because they understood the power of solidarity.

And while he did not lead the more recent immigrant youth campaign, his teachings influenced this movement. Many immigrant youth movement leaders from UCLA were enrolled in our class over the years, and his lectures and teachings greatly impacted them. Many embraced these lessons as they went forward to carry on nonviolent campaigns for immigrant rights.

Can you talk about the process of writing this book?
Because Rev. Lawson and I were teaching together, I thought it would be an ideal project to engage our students in the process and partner with us to write this book. That’s how we came up with a plan to teach a graduate seminar on nonviolence and social movements and bring into the classroom some amazing leaders in the field of nonviolence to dialogue with Rev. Lawson.

We had two classes that focused on the production of this book. The first followed a lecture format that gave about 100 students a historic overview on the power of nonviolence nationally and internationally. The second class was a seminar for 20 graduate students. We brought in Durazo, Bernard LaFayette, Dolores Huerta and leaders from the immigrant youth movement to talk with him about various social movements.

Students then formed research teams to draft papers that reflected their understanding. The editorial team, which consisted of Rev. Lawson, recent UCLA Ph.D. graduate Ana Luz Gonzalez and me, met for many months to review manuscripts and give feedback to student authors.

Rev. Lawson was deeply engaged from beginning to end and spent hours and hours poring over the manuscript. He wanted to make sure it was just right, that people were properly credited, that their stories and experiences were given the respect they deserved. We were very grateful for his time and attention in making sure that each story was just right.

What do you hope readers will take away from the book?
We think this publication is extremely relevant to the current social movements in the United States and beyond. There are very few books of this kind that provide insight into what sustains nonviolent social movements and the inspiration to challenge injustice, endure, grow and win. For people who are engaged in supporting social change, we think this publication will be an invaluable resource.