Stepping into a performance space with as long and august a legacy as UCLA’s Royce Hall can mark a profound experience for a young performer or mid-career artist.

Recently, singer-songwriter Jason Mraz, who honed his craft in San Diego coffeehouses before releasing his first album in 2002, made his own mark on Royce Hall, taking over the venue for a concert event filmed as part of the PBS program “Live from the Artists Den.” Now in its eighth season, the TV series is a production of The Artists Den, an innovative music platform best-known for presenting concerts by extraordinary artists in non-traditional or historic settings.

Mraz’s Royce Hall segment airs at 8 p.m., Sunday, July 27 on PBS SoCal. A short feature video “Inside the Den” that delves into the history and importance of Royce Hall is posted on the Artists Den website.

“‘Live from the Artists Den’ is all about creating a once-in-a-lifetime connection between an artist and a special place,” said creator and executive producer Mark Lieberman. “The decision to film in a certain location is always the result of repeated conversations with the artist — is there a spot or a city that they have a connection to? What kind of vibe or feel are they going for? Are there any special interests or causes they'd like to highlight? Do they want the audience to be standing or seated?”

“Jason is also very passionate about the environment, and having him do a short acoustic set on the terrace earlier in the day for a few fans allowed us to take advantage of the natural beauty of UCLA's campus," Lieberman said.

Mraz has performed in Royce Hall before, opening for Willie Nelson in 2003, but his Artists Den headlining appearance took a turn in Bruin pride, said Royce Hall rental events manager John Henson, who worked for nearly a year with producers to make the concert and filming happen. 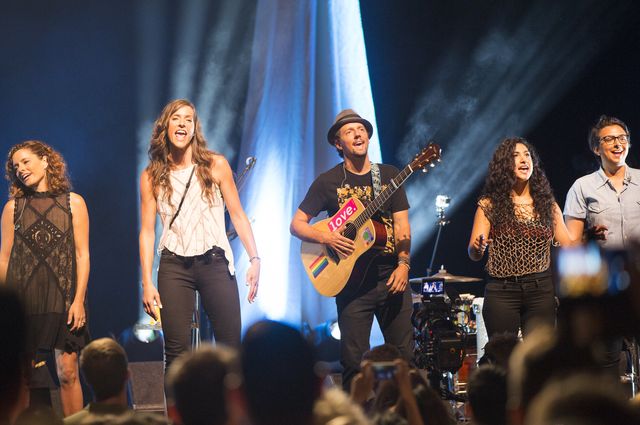 “During some between-song banter, the band members acknowledged their Bruin connection with the audience, and led the audience through an impromptu Bruin eight-clap,” Henson said. “This amused Jason, but he jokingly complained about the ‘fight, fight, fight’ section and had them all do it over but ending by shouting ‘love, love, love!’”

Hundreds of UCLA students lined up for the free concert, Henson said, allowing many their first experience inside the iconic Royce Hall.

There’s a real sense of reverence and legacy to be found in historic spaces like Royce Hall, and artists definitely respond to it, said Kristy Edmunds, artistic and executive director of Center for the Art of Performance at UCLA (CAP UCLA), which is housed in Royce Hall and presents an annual season of performances in music, dance, theater and spoken word.

“It’s especially prevalent when younger artists who may have witnessed a performance from a personal icon on a stage, or have memories of being in the audience of a particular venue, when they find themselves on the other side of that stage, it is a profound moment in their career,” Edmunds said.

And CAP UCLA’s student group Student Committee for the Arts has brought to the Royce stage Janelle Monae, Edward Sharpe and the Magnetic Zeros, Dirty Projectors and more, stamping these groups into the legacy of Royce Hall at pivotal early moments in their careers.

“It’s a privilege for Royce Hall to be part of the journey of so many performers throughout their individual artistic trajectories," Edmunds said, “and we’re extremely proud that this very special moment with Jason Mraz was documented in a way that really celebrates the hall, it’s deep history and what it has and will continue to offer the culture of this campus and this city.”