Four UCLA students hurriedly piled into a tan station wagon in Westwood and headed south, radio blasting. Time was of the essence, but they weren’t rushing to a get to a music festival or spring break in Mexico — they just didn’t want to miss low tide.

It’s a routine that Denita Toneva, a senior majoring in environmental science, has gotten used to. “I’ve learned to schedule my life around the tides,” she said.

The students were headed to the craggy shoreline of Palos Verdes to study intertidal zones, critical ecosystems that link land and sea. The rocky tide pools at the edge of this coastal neighborhood are home to diverse plant and animal life such as small fish, sea anemones and mollusks.

The research these students are engaged in is part of the Senior Practicum, a yearlong program that pairs small groups of students with real-world clients to devise solutions to environmental problems. The practicum is mandatory for all undergraduate environmental science majors with the UCLA Institute of the Environment and Sustainability. 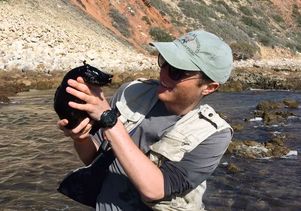 David Colgan/UCLA
UCLA student Joseph Curti holds a sea hare he found living in a rocky tide pool at the base of steep bluffs in Palos Verdes.

Toneva’s group chose to work with the Bay Foundation, a nonprofit environmental group that’s also known as the Santa Monica Bay Restoration Foundation. “Getting the students [to work on the project] was an opportunity to get that next generation of thinkers involved in this process,” said Tom Ford, the foundation’s executive director.

Initially, the problem the UCLA students were tackling concerned sea urchins that were overpopulating the tide pools and ravenously devouring algae, an important link in the food chain. Without the algae, other species would have nothing to eat, and the ecosystem’s biodiversity would be in serious trouble. In November, their initial plan was to remove the urchins and take weekly measurements to see how other species recovered.

The urchin invasion was wiped out, likely because of warm waters from the global climate event. When the students showed up at the tide pools in December, all that remained was a few scattered shells.

Shifting tactics, the team decided instead to record data about intertidal life during El Niño. They now plan to compare this year to the massive 1997-98 El Niño and non-El Niño years — hopefully shedding light on how climate change impacts biodiversity. The research will take them off campus weekly until May to brave the elements and get their feet wet with challenging fieldwork.

The work is equal parts science and cardio-beach adventure. To get to their research site, students must scramble hundreds of feet down bluffs with equipment in tow and then wade into 60-degree water to measure out a 30-meter section of tide pool. Using waterproof pens and notepads in the chilly water, they record data about what kind of species they find and in what numbers. They also measure pH levels, temperature and salinity as well as record physical characteristics of the ocean bottom.

Working meter by meter, they must move quickly, wasting no time when the tide is low. It’s exhilarating and a little bit scary, Toneva said, “but that’s the fun part.”

On this particular Sunday between rainstorms, the students were rushing more than usual, desperate to collect data to maintain a consistent record. When they pulled up to the bluffs, they were greeted by 25 mile-per-hour winds and rough surf. But following safety procedures, the team worked quickly, constantly peeking over their shoulders for waves. The big ones caused the water to foam, obscuring their view and slowing the count. But working methodically, they recorded data as the tide rose.

“Hurry up. Let’s get out of here,” urged student Joseph Curti, moments before a big wave soaked them one last time before they scurried to shore with their data. As they worked, the students remained playful, laughing at clumsy missteps and watching each other’s backs. Casey Crampton, who grew up south of Palos Verdes in Orange County, said camaraderie is one of the biggest benefits of the Senior Practicum. “There’s a lot of bonding,” he said. “We travel to the site together, we’re there for a couple hours and we have weekly team meetings.”

For Toneva, the impact of their work is what matters most — collecting data that can help scientists preserve intertidal communities in the future. They’re also protecting creatures like sea hares, large slug-like mollusks that Toneva calls “cute.”

“Everybody thinks environmentalists are total pessimists, but in reality we are the biggest optimists,” Toneva said. “We know how bad it is, and we still think we can make a difference.”

This story has been adapted from one posted on the UCLA Institute of the Environment and Sustainability website.