Kristina Louie, a UCLA postdoctoral student who died suddenly in 2004 at age 29, was honored last week when a creature she researched and cared about was named after her.

Eucyclogobius kristinae — commonly known as the Southern Tidewater Goby — officially became its own species when the paper naming the fish was published. The two-inch fish is endangered and lives exclusively in three or four lagoons at Camp Pendleton Marine Base in San Diego County. 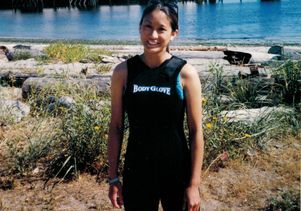 David Jacobs, a professor of ecology and evolutionary biology in the UCLA College and a member of the UCLA Institute of the Environment and Sustainability, co-authored the PLOS One paper, naming the fish after Louie, who was one of his students. Jacobs’ paper is a result of nearly two decades of research on the goby.

The scientist said he was impressed by Louie’s diligence as a scientist and her commitment to conserving California’s coastal life.

“She really enjoyed going out in the field up and down the coast,” Jacobs recalled of the student from San Francisco. “On one trip, she went all the way to Alaska to get to the bottom of differentiation between species.”

Louie studied the goby, mollusks and various species that live in eelgrass beds — underwater meadows found in bays, coves and estuaries. Her untimely death came just months after she received her Ph.D. in biology in 2003.

Originally, the tidewater goby was thought to consist of one species. In 1994, United States Fish and Wildlife Service listed that species as endangered, having disappeared from 50 percent of its coastal lagoon habitats since 1900.

A few years later, Jacobs and other researchers observed that specimens from Camp Pendleton’s lagoons were different at a molecular level. They began describing the fish as its own unique species and recording the physical ways in which it differs from its already-named cousin, Eucyclogobius newberryi.

“We can see that the jaw is a little more angled up,” Jacobs observed. “This is a bit of a fatter fish. They have evolved differences as a consequence of living in different environments.”

While  research on the goby is still in early stages, Jacobs thinks the fish may have evolved to be wider because it lives on the bottom and doesn’t swim around as much as the ones farther north.

In a biological sense, the most distinguishing feature of the Southern Tidewater Goby is that it has a different number of sensory organs in its head. “That’s the most diagnostic thing,” Jacobs explained.

“This species has evolved in isolation for in excess of 1 million years,” the scientist said. “This newly described endangered species should be able to live together with the large human population of Southern California for many years to come with small scale restoration and active management.”

Getting a species named takes a lot of work, especially when it is not dramatically different from another related species. The UCLA researchers painstakingly noted differences in the gobies — their body width and the number of spines in pectoral fins, for example. The process also requires a formal description of its physical characteristics, where it fits within the classification of other organisms and inclusion of identifying materials in a museum.

The publication of a new species of goby is of critical interest because it illustrates how coastal development has eliminated coastal lagoon habitat and locally evolved fauna.

These lagoons provide a variety of ecological benefits. In addition to supporting local evolutionary heritage, they trap runoff, providing the only freshwater in a frequently dry setting. Thus, California lagoons sustain local wetland habitats and a variety of species on the coast. Jacobs has been working closely with the Fish and Wildlife Service to make sure that happens. In 2014, an attempt was made to down-list the gobies from “endangered” to “threatened,” giving them fewer legal protections from development and other human activities.

Jacobs’ paper will factor into this ongoing discussion. Down-listing the new species is “certainly inappropriate because they’re on the verge of extinction,” he said.

Just this winter, a massive effort was made to relocate the fish due to fears that El Niño might wipe them out completely. Led by Brenton Sties, a Ph.D. student in Jacobs’ lab, a team of Marines and Fish and Wildlife Service employees rounded up the gobies and housed them at Birch Aquarium in the Scripps Institution of Oceanography in San Diego and Santa Monica Pier Aquarium.

And yet the future of the southern goby is hopeful. Without much investment, additional lagoons could be restored to expand its habitat, Jacobs said. The Fish and Wildlife Service is on the case, working with Jacobs to identify potential sites on existing parkland.

Kristina Louie, the goby’s namesake, would probably have appreciated that.

This story was adapted from one posted on the UCLA Institute of the Environment and Sustainability website.