Adapted from a story that is running on the Zócalo Public Square website.

King George III imposed taxation on the American colonies without representation. Franklin D. Roosevelt unilaterally exiled Japanese Americans to internment camps. Barack Obama declared his intent to bypass a perpetually gridlocked Congress by exercising executive power: “I have a phone and I have a pen.”

Since the earliest days of the United States, America’s commanders-in-chief have sought to increase their power to act as they pleased — despite the objections of Congress, the rulings of courts or the wishes of the public. But now, under President Donald Trump, that long-simmering trend is reaching a boiling point that some believe could threaten the separation of powers and undermine the nation’s cherished system of checks and balances.

On Tuesday, April 26, an overflow crowd at the Museum of Contemporary Art in downtown Los Angeles turned out for a lively Zócalo/UCLA event during which an expert panel took up the question, “Does the expansion of presidential power threaten the Constitution?”

Moderator Ronald Brownstein, senior editor of The Atlantic and a CNN political analyst led off the evening by observing that President Trump is by no means the first White House occupant to try to inflate his portfolio of executive prerogatives. 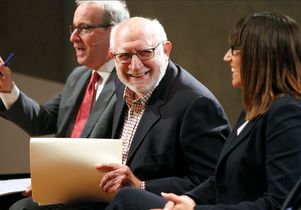 But some of the panelists suggested that Trump — who ran “a top-down campaign where he is the decider,” Winkler said — already has shown signs of pushing his privilege to act beyond that of his predecessors. Among those signs are his thwarted attempt to place a temporary travel ban on visitors from some largely Muslim countries, and his administration’s (also thus far thwarted) threats to withhold federal funds from states that don’t fully comply with federal immigrant authorities’ roundups of undocumented immigrants.

John Woolley, a UC Santa Barbara political scientist and co-director of the American Presidency Project website, said, “One of the truisms is: Presidents get away with what Congress lets them get away with.” But Woolley said that Trump’s urge to overreach stems from his alarming “disregard for a number of norms” that have served as a check on past presidents. For example, Trump has publicly criticized federal judges and journalists and even private citizens by name, and has refused to subordinate his brash personal style to other Oval Office shows of decorum.

“One of the things we know about Trump is that he has been profoundly ignorant of government processes and policies,” Woolley said.

But because of his shortage of Capitol Hill contacts and his complete lack of experience in wrangling legislation, Trump may feel more tempted — or obliged — than previous presidents to try and cram his agenda through by executive fiat, the panelists said.

Joel Aberbach, director of UCLA’s Center for American Politics and Public Policy, said that Trump was sworn into office lacking a clear legislative strategy; he still has yet to fully stock his administration with key appointees. “So executive authority is the tool” that Trump is going to wield, Aberbach said.

The debate over the proper limits of White House authority is as old as the republic, if not older. UCLA political scientist Lynn Vavreck said the nation’s founders, who were rebelling against the tyrannical dictates of England’s monarchs, always were wary of granting too much power to the new U.S. executive.

Yet, particularly over the last half-century, across successive administrations of both major parties, presidents have tested their ability to do end-runs around an increasingly weakened and polarized Congress, the panelists concurred.

While Congress has lost ground to the president, federal courts have acquired more power over the last 100 years, Winkler said, and so Trump is now pushing back against them. Already, he has suffered some stinging defeats, such as the court-ordered stays on his attempted travel ban.

Is expansion of executive power necessarily an ominous sign?

Not always, the panelists suggested. Vavreck said that, in certain cases, as with Lyndon B. Johnson during the civil rights movement era, the president has asserted executive power as a positive force to move Congress and consolidate a timely shift in the nation’s attitudes.

But such examples are in danger of becoming the exception that proves the rule, the panelists indicated. U.S. members of Congress, under relentless pressure from partisan media outlets and their own most extremist constituents are tied up in legislative knots — practically providing an invitation for the president to trample the Congress, even without having won a landslide victory or a popular mandate.