A device that reduces the harmful environmental impact of bus emissions and an e-commerce platform for maternity clothes were the winners at the third annual Lowell Milken Institute-Sandler Prize for New Entrepreneurs’ final round competition on April 11.

In a packed room at UCLA’s Luskin Conference Center, six teams of students from UCLA School of Law and several other parts of campus pitched their start-up companies to a panel of judges in a “Shark Tank”-style presentation. It was the culmination of a year-long initiative in which budding entrepreneurs receive mentorship, craft their business plans and hone their proposals in hopes of taking home a $70,000 prize for first place or $30,000 for second place.

With a total of $100,000 at stake, the LMI-Sandler Prize is the largest entrepreneurship competition at any law school in the United States. It is the brainchild of Lowell Milken and Richard Sandler, members of the UCLA Law Class of 1973, who established the competition at the law school’s Lowell Milken Institute for Business Law and Policy in 2016. The aim is to foster an atmosphere where UCLA students can bring their innovative ideas to market and where UCLA Law students can gain experience building a company from the ground up.

In the event’s third year, 18 student teams submitted plans, which judges narrowed to six for the final round.

Sandler, a partner at Maron and Sandler, told the nearly 200 people in attendance that the entrepreneurs’ efforts were stronger than ever. “All the business plans, the concepts, the ideas, and the presentations, overall, were the best this year,” he said, adding that, for the judges, picking a victor had never been more difficult or time-consuming. “There were no losers here tonight.”

‘Such a unique mentoring opportunity’

Mote won the top prize of $70,000. The inspiration of third-year UCLA Law student Mac Kennedy, working with fellow third-year law student Mary Vu and a team of engineers from Caltech and the Lawrence Livermore National Laboratory, the company is developing a device that mounts on bus roofs, filters carbon dioxide emissions and converts the captured gas into ethylene, which can be recycled into everyday plastic goods.

“Transportation has surpassed electricity [production] as the United States’ biggest sector of carbon dioxide emissions, so it was critical to swiftly begin addressing this elephant in the room,” Kennedy said. In fulfilling this task, he engaged the resources of UCLA Law’s nationally renowned Emmett Institute on Climate Change and the Environment, gaining pivotal mentorship from institute co-executive director Cara Horowitz, who graduated from UCLA Law in 2001. He has also worked in the U.S. Department of Justice’s Environment and Natural Resources Division, the Department of Energy, and the Environmental Protection Agency, and he plans to work on this venture full-time after graduation.

“We feel really lucky to have been a part of the competition,” Kennedy said. “It is such a unique mentoring opportunity and means of jumpstarting our business. It’s hard to come out of the competition without having a deep-dive learning experience.”

Added Vu, who specializes in business law at UCLA Law and plans to work on Mote and at a boutique litigation law firm after graduation, “The $70,000 that we won is the only funding we’ve received thus far, so it means a lot to us. Now, we hope to finalize our small-scale prototype and submit it to the California Air Resources Board for testing and certification.” From there, she said, the team will seek more funding and work to scale up the business.

The second-place prize of $30,000 was awarded to BellaNové, an e-commerce site that matches pregnant women with fashionable, comfortable and relatively inexpensive workplace attire for rent. It is the idea of UCLA Anderson School of Management student Jenny Leung, who paired with four law students — Alysia Anderson, Grace Bowden and Roxana Soroudi, who will all graduate from UCLA Law later this year, and Alexandra Guthy, who is in her first year at the law school. 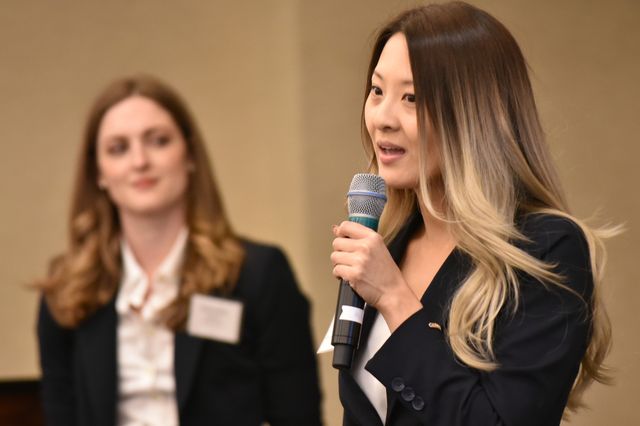 “The moment we met, we knew we had something special, and the experience of working on this team of phenomenal, ambitious women was absolutely incredible,” said Anderson, whose studies have centered on intellectual property and business. “The LMI-Sandler Prize is special because it focuses not just on good business plans but also on collaboration in a variety of industries and disciplines. Law informs the business and the business helps lawyers learn about the law.”

“It is always a privilege to sit in with the judges and hear their thoughts as they evaluate the presentations,” said Joel Feuer, executive director of the Lowell Milken Institute, who served as the emcee of the festivities and continues to advise winners after the competition ends. “Most gratifying is seeing our students master complex information about how businesses work, navigate the start-up economy, and apply those skills using mentorship and teamwork, which are vital to any endeavor in the current marketplace.”

Sponsored by Stradling, the final-round event was opened by UCLA Law Dean Jennifer Mnookin, who explained how, in three years, the competition has propelled the law school into a leadership role in the robust entrepreneurship ecosystem of the UCLA campus.

An additional audience-favorite award of $1,000 went to Vanth, whose team includes students from several UCLA schools. It is a social-media platform that directly connects consumers seeking to wear the trendiest clothes with seamstresses who then custom-make fashionable garments under good conditions and for a living wage.

Other finalists included ClearVision Tech, whose proprietary clothing item makes MRI procedures more accurate for doctors and more comfortable for patients; Efsevin, a drug that treats irregular heart rhythms; and Riders Share, which bills itself as “the Airbnb of motorcycle rentals.”