More than 1,000 high school and college students from across the United States descended last weekend on UCLA’s Pauley Pavilion to plug into LA Hacks, a collaborative computer programming event organized by two UCLA student groups and sponsored by LA 2024, the organization leading L.A.’s bid to host the 2024 Olympics.

Beginning on Friday and ending Sunday, student programmers worked around the clock on software and hardware to work on projects in a range of categories, including sports entertainment and fitness, at an event that offered prizes to the winners. This was the third annual LA Hacks, organized by Bruin Entrepreneurs and Sigma Eta Pi, two student groups for entrepreneurs at UCLA. 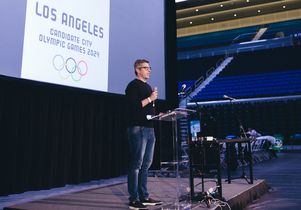 Courtesy of LA 2024
Casey Wasserman, chairman of LA 2024, delivers the keynote address at the opening ceremony of LA Hacks.

Throughout the weekend, students from universities all over California as well as institutions in Zurich and Toronto, attended tech workshops; an exclusive screening of HBO’s “Silicon Valley” with appearances by cast members Josh Brener and Amanda Crew; tech talks; and panel discussions featuring U.S. Olympians and tech industry leaders, among others.

“As an Olympic superfan with a keen interest in seeing the games engage my generation, it was a privilege to partner with LA 2024 for LA Hacks 2016,” said UCLA junior Ashvin Vinodh, a computer science major and the executive director of LA Hacks. “LA Hacks is all about providing students with the resources they need to push their minds to the limit and build something amazing.”

Jason Spielman, a UCLA junior majoring in design media arts, served as chief of design at the event. "It's always really inspiring to see the remarkable innovations that everyone is able to create in only 36 [hours]. This year, it felt like many of the hackers focused on building things that make our community and world a better place, which was really awesome to see. A few of the top 10 included a mobile application to help the blind understand their surroundings and a smart water meter that monitors water flow to encourage water conservation."

“As someone who has seen a lot of basketball games at UCLA’s Pauley Pavilion, I am fully confident saying LA Hacks was a slam dunk for LA 2024,” said Wasserman. “From the start, LA 2024 has been committed to leveraging the city of angels’ ready-made connection with youth culture to deliver a new games for a new era. As a global capital of entertainment and technology, Los Angeles speaks to youth on a daily basis. This weekend, the youth spoke to us and imagined promising technology applications for 2024.”

The runner-up title in the sports technology competition went to a team of three UCLA students and a USC student who came up with the concept for a wristband that measures fans’ heart rates and movements during live sporting events. Fans’ wristbands are connected digitally to their seats, which light up in different colors that correspond to the mood of the wearer of the wristband.

“I’d like to congratulate the LA Hacks organizers for gathering some of our nation’s brightest students in the City of Angels for a tremendous weekend of creativity and community spirit,” said Los Angeles Mayor Eric Garcetti. “The students attending LA Hacks this weekend embody the quintessentially Californian values of optimism, creativity and innovation.”

To see submissions in all the categories, go here.

See this video that Spielman produced.