When the Walt Disney Company was planning a visual spectacle — a centerpiece show — to be performed in front of the Enchanted Storybook Castle at the new Shanghai Disney Resort, Disney executives looked to a longstanding relationship with a UCLA professor to help bring it to life.

Designer and UCLA School of Theater, Film and Television professor Myung Hee Cho had previously created sets for the popular “Golden Mickeys” show at Hong Kong Disneyland. So she became a key partner in staging this new production for the Shanghai park, assisted by TFT alumni and students majoring in scenic and costume design.

The $5.5 billion Shanghai Disney Resort, which opened in June, is the third largest Disney resort after Walt Disney World in Orlando, Florida, and Disneyland Paris.

Cho, who has been teaching at UCLA since 2009, has been designing sets and costumes all over the world for theater, opera, dance and other special productions. For Shanghai Disney, she applied her talents to “Golden Fairytale Fanfare,” a 17-minute musical showcase that was at the center of the park’s opening celebration, featuring more than 50 performers and seven musical numbers in each of six daily shows. Approximately 2,500–5,000 people were anticipated to attend each performance.

It takes place in front of the largest, most ornate, interactive Disney castle ever built — there are activities and a restaurant inside the structure. And it’s the only Disney castle with mosaics that feature all the Disney princesses on its walls.

Working alongside Disney Creative Entertainment — the team responsible for producing the new show — Cho managed to reimagine the look of six Disney princesses while still maintaining their familiar silhouettes: Ariel ( from “The Little Mermaid”), Merida (“Brave”), Jasmine (“Aladdin”), Snow White, and the royal sisters from “Frozen,” Elsa and Anna.

“I researched each of the princesses and then contemporized their looks,” Cho says of her process. She kept each character’s familiar colors, but used high-tech materials such as 3-D prints; iridescent polyvinyl chloride, or PVC; translucent Mylar; gold mesh; and silk lamé to help achieve the fashion-forward yet iconic costume designs. Renowned Chinese director Shi-Zheng Chen (“Dark Matter”), who directed the production, insisted that the costumes be stylish, vibrant, reflective and sculptural for the outdoor show, Cho adds.

“My objective was not only to reimagine the look of classic Disney princesses such as Snow White and Jasmine, but to have them be visible from a long distance, taking into account different sight lines and environmental factors,” recalls Cho. “We did numerous visual tests for all the fabrics to see if we could see the costumes from 40 feet away.” 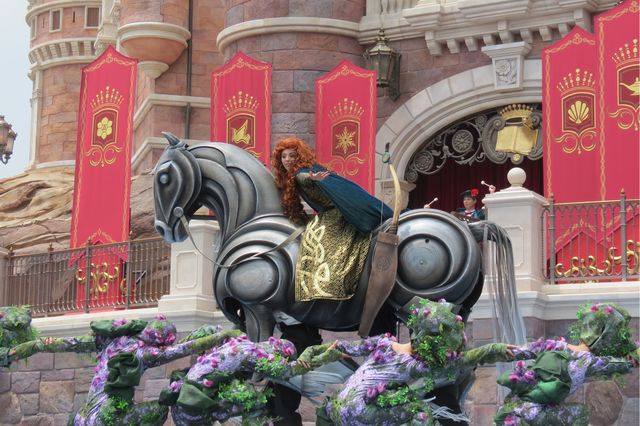 Courtesy of Walt Disney Company
Merida on her horse, Angus, from the Disney movie “Brave”

Using the same design principles, Cho also partnered on the creation of several of the show’s puppets, built by the Michael Curry Studio in Portland, Oregon, including a stylized metallic Angus, the horse from “Brave,” and majestic elephant heads, reminiscent of those found in “Aladdin.”

In creating the sets for the show, Cho noted that hidden beneath the castle stage is an intricate lift system that enables performers to emerge on stage in dramatic fashion.

Disney Creative Entertainment executive Tom Williams worked with Cho throughout the process, combining the creative and technical designs with the storytelling and overall production of the show.

“We’re proud of our collaboration with Cho Designs,” said Williams. “Working together, we were able to achieve new heights of bringing these Disney stories to life for guests at Shanghai Disneyland.”

Many UCLA Theater, Film and Television graduate students had the opportunity to assist Cho on the project, which began in September 2013. Student scenic designers included Yuki Izumihara, Patrick Scalise and Eunnym Cho, who assisted in concept rendering, model building and drafting.

In addition, alumna Yee Eun Nam was on site in Shanghai for six weeks during the technical and preview process, working alongside the director and other designers, who reported back to Cho in Los Angeles as final adjustments were made before the show’s opening.

“She was the right person for the job,” Cho says of Nam. “She’s a huge Disney fan and was just so happy to be there working on the project.”

Meanwhile, Cho has moved on from pop culture to high culture. Recently, she designed the sets and costumes for a production of Gioachino Rossini’s opera, “The Thieving Magpie,” directed by Peter Kazaras, now playing at the internationally renowned Glimmerglass Festival in Cooperstown, New York.