Ring any bells? Maybe you chowed down on burgers on bagels at the Hip Bagel? Bought bell-bottoms at Jeans West? Browsed through 8-track tapes at Vogue?

These one-time Westwood Village establishments are long gone. In fact, hundreds of businesses have come and gone since the commercial district debuted in 1929. 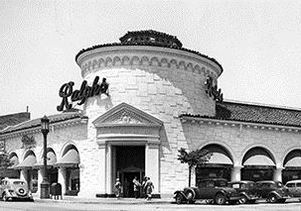 But even the most popular joints eventually vanished. Crumplar’s was replaced by Mario’s Italian Restaurant, followed by California Pizza Kitchen. Googie-style Ships Coffee Shop — famous for its “Ship Shape” patty melt and toasters on the tables — succumbed in 1984, giving way to a high-rise office building.

Carl Andersen’s Chatam, a favorite with Hollywood celebrities, served its last “Chatam Special” — turkey, ham, Swiss cheese, coleslaw and Russian dressing on seedless rye bread — in 1987. Long gone are the Maine lobsters at the Hungry Tiger, the “Beggars Banquet” at the Bratskellar (located where Peet’s Coffee is today), the decadent ice cream at Wil Wright’s (in what is now Skylight Gardens), the little black pots of soup at the Stew Kettle, the carhops at Truman’s drive-in and the cleverly named sandwiches at D.B. Levy’s (“Ike and Tina Tuna,” anyone?).

And what’s a college town without entertainment? The first movie palace, the Fox Westwood Village Theatre, appeared in 1931, joined later by the Bruin Theatre. At one time, the number of screens reached nearly 20. The Village, Bruin, Billy Wilder at the Hammer, and Regent theaters are the only ones remaining north of Wilshire Boulevard; the National Theatre (aka “the black whale”) was razed and eventually replaced by a mixed-use, multistory building, and the Festival Theater stands empty.

The disco era boogied in with Dillon’s, boasting “four fantastic floors of entertainment.” At around the same time, the Westwood Playhouse opened in the Contempo Westwood Center, along with a furniture store, gift shop and Stratton’s Restaurant. Today, the site is home to the Geffen Playhouse. 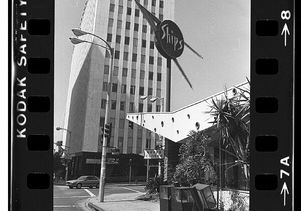 Courtesy of UCLA Digital Library
Famous for its "Ship Shape" patty melt and toasters on the tables, Googie-style Ships Coffee Shop succumbed in 1984 to a high-rise office building.

What may be best remembered are the specialty shops. Before smartphones, Bel-Air Camera was a staple. For a gourmet gift, Jurgensen’s Grocery was perfect. And when people still sent handwritten letters or needed typing paper, Campbell-Tolstad Stationers was the go-to place. (Today, Flax Pen to Paper — owned by the daughter of the proprietor of the former Flax art supply store on Lindbrook — still offers a broad selection of greeting cards and notepaper.) And Foster’s Crystal was the preferred source for wedding gifts.

Still, in the midst of so much turnover, some establishments have survived for decades — Stan’s Donuts, Sepi’s, Lamonica’s NY Pizza, Morgan & Co. Jewellers, Helen’s Cycles, Elysee Bakery & Café (on the former site of Children’s Bootery), Muriel Chastanet and Diddy Riese — and some are almost as old as the village itself: Campus Shoe Repair and Westwood Sporting Goods. Oakley’s Barber Shop is even older.

What’s the secret to their longevity? “I hear all the time [that clients] just like spending time in here,” says Clinton Schudy, owner of Oakley’s, a cross between a nostalgic barber shop and a modern hair salon. “It’s not just the haircuts. They like the feel of the shop — homey, inviting and relaxed.”

UCLA alumnus Dean Abell,  grandson of the founders of Sarah Leonard Fine Jewelers (started in 1946 as Crescent Jewelers), says sustained success comes from offering a unique range of high-quality products and the fact that they treat customers like friends or family.

The village has always evoked special memories for Bruins. “Westwood Village was the place,” says Steven Sann, chair of the Westwood Community Council and the holder of two degrees from UCLA “There was no Third Street Promenade, no Old Pasadena, no Universal CityWalk, and no Grove. Westwood Village was it.”