Journalists from across the nation gathered Tuesday night at Capitale in New York for the 2016 Gerald Loeb Awards banquet. The awards, presented by the UCLA Anderson School of Management, are among the highest honors in journalism, recognizing the work of journalists whose contributions illuminate the world of business, finance and the economy for readers and viewers around the world. 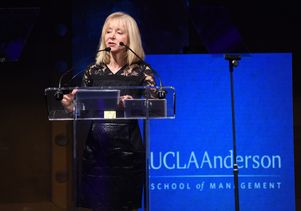 Judy Olian, dean of the UCLA Anderson School of Management and chairman of the G. and R. Loeb Foundation, welcomed honorees and their guests to the annual event, at which CNBC's Tyler Mathisen, co-anchor of CNBC's “Power Lunch,” served as master of ceremonies.

Two special awards for career contributions were presented to executives of Reuters. The Lifetime Achievement Award went to managing editor Paul Ingrassia. The award recognizes an individual whose career exemplifies the insight and professional skills necessary to further the understanding of business, financial and economic issues.

The Lawrence Minard Editor Award was given to Amy Stevens, Reuters’ executive editor of professional news, for excellence in business, financial and economic journalism editing. The award is presented to an editor whose work does not receive a byline or whose face does not appear on-air for the work covered.

Winners of 12 competition categories were chosen from more than 490 entries submitted by local, regional and national news outlets. The categories and winners are:

Commentary
“Inside the Boardroom,” by James B. Stewart, The New York Times;

Feature
“The Unraveling of Tom Hayes,” by David Enrich, The Wall Street Journal;

UCLA Anderson has been presenting the Gerald Loeb Awards since 1973. The awards were established in 1957 by the late Gerald Loeb, a founding partner of E.F. Hutton, to encourage reporting on business and finance that would inform and protect the private investor and the public.

For more information about the awards, visit the Loeb awards website.