Editor’s note: This article was updated on Aug. 6, 2021, to correct the date on which Jesus Leon drove from his  home to the park.

It’s approaching 11:30 p.m. on July 20 in South Los Angeles when Jesus Leon turns the key in the ignition of his black Honda Accord. He hasn’t slept as well as he wanted to, but with some water, food and three changes of clothes in his backseat, and a whole lot of determination he is ready to embark on his Everest-sized challenge.

Leon drives roughly 10 miles to the Baldwin Hills Scenic Overlook State Park, more commonly known as the Culver City stairs, located southwest of downtown Culver City. Along the way, his mind is focused on completing the Everesting challenge, a grueling endeavor that requires athletes to bike, hike, climb or run the equivalent of summiting Mount Everest — the world’s tallest mountain — in a single workout.

That’s more than 29,000 feet (!) of elevation gain. Elevation gain — which is calculated by the total amount climbed — distance, moving time and average pace are all tracked from start to finish using an app. Though there’s no time limit, Leon will not be allowed to sleep for what he estimates will be the next 30 to 36 hours.

He arrives at his destination and is ready to go. Almost.

While Leon is mentally and physically prepared to start, he has forgotten his tracker watch and needs to drive home to get it. Without it, the group that certifies the challenge records can’t verify his data.

It’s 12:32 a.m. when Leon finally takes his first step, with the moon lighting his path. 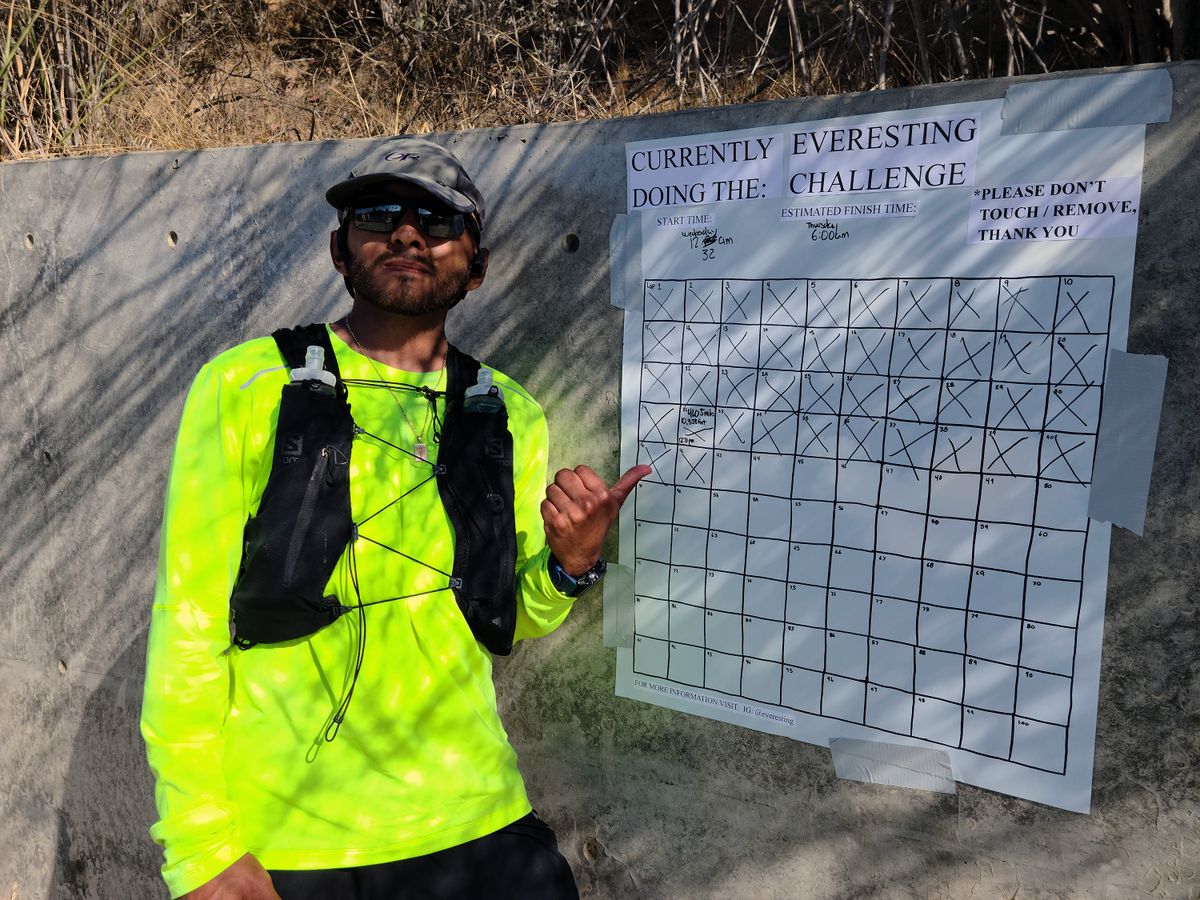 Sean Brenner/UCLA
Jesus Leon put an X in his chart after each trip up and down the stairs in Culver City.

He will need to complete 91 laps of the stairs to achieve the 29,108 foot elevation gain that is required. At the bottom of the stairs, he has affixed a posterboard with 91 boxes to a concrete wall. He will add an “X” to the boxes one by one with a black marker each time he passes. Losing track of his progress is not an option.

For the next five to six hours, it’s just Leon, a playlist that includes some his favorite film scores, and his thoughts as he runs up to the top of the stairs and then jogs down the dirt path that winds its way back and forth along the north face of the hill. This is the easy part.

“When the morning came it got busier, and by noon it was hotter than I’d anticipated — way hotter,” said Leon, who endured mid-80 degree temperatures throughout the first day. “I had to constantly take breaks and go to my car for water because of the heat. By the time I made it to the halfway point — 45 laps — I was out of water. I was out of everything.”

Fortunately, some neighbors and his family came by with extra provisions for him. Nearby street vendors also gave him food and drinks free of charge as a sign of support.

By 2 a.m. the following day — Thursday — Leon was starting to “hit the wall.” He started to slow down and allowed himself a break every six to eight laps.

“I can work out for 24 hours easily, but once I pass that mark that’s when it gets difficult.”

However, like all of the other extreme challenges he has tackled, including recovering from cancer at the age of 21, Leon persevered and successfully finished the Everesting challenge on Thursday, July 22, around 8 p.m., a longer time than expected, but one that he would have taken as long as necessary to complete.

This isn’t the only major athletic challenge Leon has set for himself during the pandemic. On April 17, Leon laced up his shoes at midnight to hit the road for what he believes is a first — a 78-mile run with an elevation gain of 12,189 feet from the shores of Santa Monica to the summit of Mount Baldy, which rests on the border of Los Angeles and San Bernardino counties. The mountain is a popular destination for hikers and is the highest peak in L.A. county. Though the summit of Mount Baldy is only 10,069 feet, because Leon’s journey from Santa Monica had rises and descents along the way, he climbed a total of 12,189 feet.

“I searched online and couldn’t find anyone who had ever done it,” Leon said. Some of his runner friends said they’d heard of people who had biked from Long Beach, which has the lowest elevation in L.A. County, to the base of Mount Baldy and hiked to the top, but never of anyone who had made the entire journey on foot, he said.

Carefully pacing himself for the first 65 miles so that he completed each mile in between 9 1/2 to 10 1/2 minutes, Leon arrived at Mount Baldy at 3:30 p.m. and changed out of his road running shoes into hiking boots. The mountain climb slowed his pace to 35 minutes per mile and 35 mph winds whipped across the landscape. Daytime temperatures rose to the 40s. Leon arrived at the summit at 7:21 p.m. and with sunset encroaching, he had to run down the mountain before darkness fell. He rolled his ankle about three miles from the bottom where a friend patiently waited to drive Leon back to Los Angeles.

Leon’s manager in UCLA Dining, executive chef Kevin Aiello, said he was floored when he heard about Leon’s run to Mount Baldy.

“I had to ask three times if I was hearing the distance of his run correctly,” Aiello said. “Jesus is very quiet and to himself. The first I heard of his run was a few days after he completed it when we were talking about what we did that weekend.”

Leon said he discovered his gift for endurance running at UCLA. He started running on the treadmill before and after his workouts at UCLA, not long after starting his job on the Hill. He started with a couple of miles at a time and then worked his way up to five miles. One day after work he decided to see how long he could run if he put his mind to it, and two and a half hours later he had run about 16 miles.

“Ever since I discovered my endurance gift, it has made me test my limits,” he said, adding that he still runs in Westwood and Santa Monica every day after work. 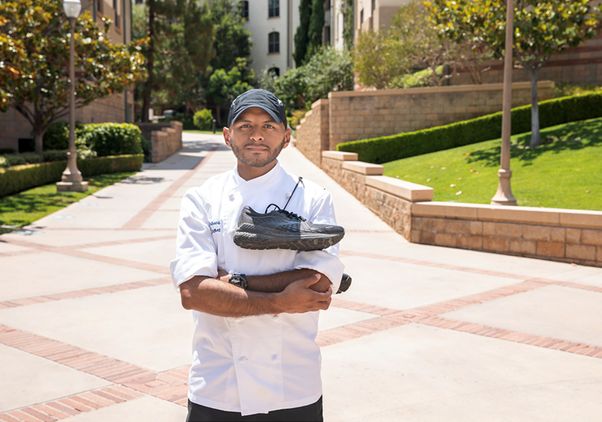 This has included running the L.A. Marathon several times and running from his home in South Los Angeles to places like the beach, the Griffith Observatory and even Palmdale, which took him 16 hours. He even completed the 13-mile Old Mount Baldy Trail (aka Bear Canyon) with a 60-pound weighted vest, just to see if he could.

Earlier this summer, Leon completed Colorado’s Manitou Springs Incline in Colorado with the 60-pound vest, which is more than 2,700 steps. The incline is 2,020 feet in just 0.9 miles. This extremely steep hike has an average grade: 41% and at its steepest the grade is 68%. He also recently completed the roughly 42-mile Timberline Trail in Oregon, with an elevation gain of 11,600 feet, in nearly 21 hours.

“Whenever I go somewhere new, I want to do the toughest workout there is around the area.”

Leon completes nearly all of these endurance events entirely on his own, although from time to time a friend will join him for a run partway — or at least pick him up from wherever he finds himself. Over the years, he says he has learned that if there is something you want to do, you can’t wait for someone else to do it with you.

“I’ve always tried to invite people to come with me, but no one ever wants to go,” said Leon, who marked the start of his 30s with a 30-mile solo run in Redding, California Aug. 3. “If you keep waiting on people to say yes, it’s never going to happen. You just have to go and do it.”