To paraphrase philosopher George Santayana — who immigrated from Spain to the United States at the age of 8 — those who do not learn history are doomed to repeat it. In an age of anti-immigrant rhetoric tinged with a hysterical patina reminiscent of the early 20th century, researchers at the UCLA Graduate School of Education & Information Studies are working to keep this from happening.

Those efforts begin with Marcelo Suárez-Orozco, Wasserman Dean of the Graduate School of Education and Information Studies, who along with UCLA professor of education Carola Suárez-Orozco and Adam Strom. The trio founded Re-Imagining Migration, a program that has created a network of educational resources and colleagues and is designed to help teachers, librarians, museum educators, and others who serve immigrant youth and their peers.

Recently the one-year-old initiative convened its inaugural meeting at the UCLA Luskin Conference Center of 50 teachers and teacher educators, museum and library personnel, people from foundations, and other stakeholders from around the world centered on finding working solutions for teaching and learning about migration through interdisciplinary methods within the arts, humanities, science, reading and mathematics.

During the conference, attendees presented their ongoing or proposed new projects on language and literacy practices; improving school climates; integrating human migration into socioemotional learning; and engaging immigrant students and their families in STEM learning.

“All children deserve to flourish to their full potential,” Marcelo Suárez-Orozco said in his welcome address. “At a time when the fundamental humanity of immigrants has been hijacked … we need to get this right. This is an endeavor that has great demographic urgency, economic urgency. It is a social and ethical endeavor.”

Strom was director of scholarship and innovation at Facing History and Ourselves before becoming director of Re-Imagining Migration, and the Suárez-Orozcos, who co-direct the Institute for Immigration, Globalization, and Education at UCLA, recognize that serving immigrant children and youth has previously been viewed largely through the lenses of English language acquisition and undocumented immigration status.

“This has been our shared history,” Strom said. “We want to help people first understand that and then by developing an educational framework, work with educators to rethink immigration and together build new tools to bring into classrooms. We can open doors for administrators around the world with the aim of making these tools available to thousands of classrooms.”

Marcelo Suárez-Orozco shared extensive data on the conditions of migration — including the fact that children are a majority of the world’s refugees; forced migrations due to violence, war, or climate change; the familial and financial decisions that drive migration; and misconceptions around the need to get immigrant students “up to speed” rather than capitalizing on their strengths. 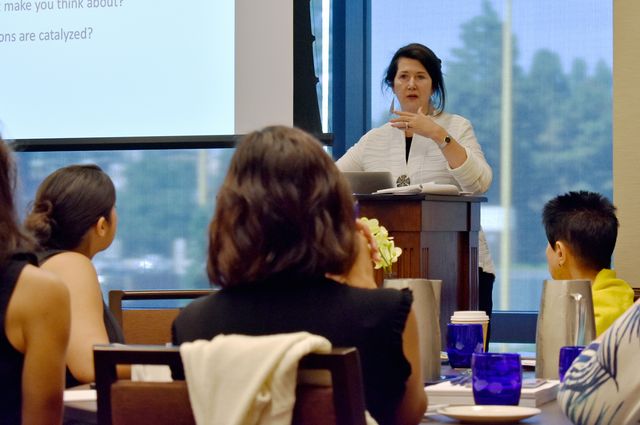 Carola Suárez-Orozco, who teaches in the division of human development and psychology at the UCLA Graduate School of Education & Information Studies, led a conversation on the psychological effects of trauma and displacement; the resilience and drive of immigrant students; and the sense of exclusion and criminalization among immigrant youth, which can undermine their academic and social success.

“We cannot look away,” she said. “We must understand what are these kids’ lives like and how do we work with them. We can frame this as a tragedy … or [about] how they find their footing in order to help them go on to reach their potential and do extraordinary things.”

Among the innovative teaching tools explored at the seminar was the Moving Stories app, which was developed by Re-Imagining Migration and will provide educators a tool to harness the power of narrative in teaching the human facets of migration. The app provides a template of questions and a platform for a video or audio-only interview about an individual’s migration history through family stories or first-hand recollection.

“One thing that can be really helpful is a reminder of our shared past, a recognition of what’s familiar in our story today, and to help people understand the differences,” Strom said. “It will help people develop a new perspective and a new language on [migration].”

Carola Suárez-Orozco said that Moving Stories provides educators a way to navigate the challenging climate around immigration through questions based on 40 years of research.

“We are also developing curriculum to be used in classrooms to prepare teachers to talk about this topic, to lead students’ investigations, and to conduct the perspective building interviews, considering common denominators of experience while recognizing that everyone has a different story,” she said.

Interviews on the Moving Stories app are searchable and can be used to find topics through keywords on particular demographics or issues like family separations. Suárez-Orozco said that the Moving Stories app has potential for normalizing and amplifying the immigrant experience in ways similar to the #MeToo movement and the It Gets Better Project.

The app’s name, Moving Stories, was chosen with three meanings in mind.

Strom said that during the coming year he and the conference organizers will work to keep the network participants connected.

“Everybody left with an action research project,” he said. “There are several dozen different ways in which people are taking away what they learned, from schoolwide projects for curriculum to museums talking about building connections with one another.”

Marcelo Suárez-Orozco said he hopes that the measures taken by the Re-Imagining Migration network of educators will also raise awareness and empathy among non-immigrant populations.

Read a Q&A with Marcelo Suárez-Orozco, Carola Suárez-Orozco and Adam Strom about the “moral imperative” to revamp the ways we educate immigrant children and youth.