As a student at UCLA, Kevin Baldwin knew that there was more to college than coursework. That’s why he participated in Greek life and a host of other extracurricular activities. As a UCLA employee who has worked on campus for nearly a decade, Baldwin knows there is more to it — if you want there to be — than just coming in and doing a good job.

Early in his career, Baldwin, an informatics portfolio manager for UCLA Health, a role that promotes the understanding, integration and application of information technology in health care settings, started attending events hosted by the UCLA Staff Assembly, a volunteer-driven organization that is run by staff for staff. From the learn-at-lunch events and the annual all-staff picnic to various sports outings and opportunities to attend small mealtime meetings with campus leadership, Baldwin began to feel as though UCLA was becoming smaller and his appreciation for it greater.

“I saw the value in the programs that Staff Assembly offers and realized that it’s a unique organization,” said Baldwin, who is this year’s UCLA Staff Assembly president.

As the first president from the UCLA Health clinical enterprise in Staff Assembly’s 40-year history, said Baldwin, one of his primary goals is to encourage staff from the health system to get involved and participate in events and programs in larger numbers, and to subscribe to the Staff Assembly listserv and newsletter.

UCLA Health employs roughly half of all UCLA’s 42,000 employees, he said. In addition, UCLA employs more people than any other University of California campus.

“Some health system employees may not even realize that Staff Assembly is for them, too,” Baldwin said. “There are still a lot of people not hearing about our activities and promotions, so we want to change that.”

As last year’s president-elect, Baldwin worked to reinstate Staff Assembly’s lunch with the medical school dean. On Nov. 7, Dr. Kelsey Martin, dean of the David Geffen School of Medicine at UCLA, and 14 randomly selected staff members will have an informal discussion. Events with other UCLA Health leaders are also being planned, he said, noting that all staff members are eligible to apply for a seat at these events.

Other upcoming fall events include the first annual UC Staff Night at Oktoberfest on Oct. 27, a guided tour of the Mildred Mathias Botanical Garden on Nov. 7 and one of Staff Assembly’s signature events, Breakfast with Chancellor Gene Block, on Nov. 28. Applications for this event will be open until Nov. 5.

From student to Staff Assembly president

Baldwin, who was born in Switzerland and raised in the Bay Area, earned an undergraduate degree in psychobiology from UCLA in 2010 and an executive master’s degree from the Fielding School of Public Health, where he studied health policy and management, in 2014. He also holds graduate certificates in health care management and leadership from UCLA Extension and biomedical informatics from Columbia University. 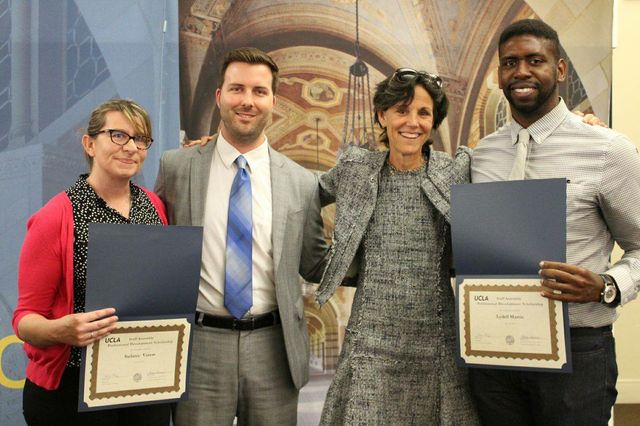 He started working at UCLA part-time in 2007, where he held positions in recreation, housing and hospitality services, and neurosurgery. In 2012, he transitioned his academic and professional experiences into health information technology during a transformational period at UCLA Health, just as the health care enterprise was preparing to implement its current electronic health record, CareConnect.

Baldwin said his transition from student to full-time employee opened his eyes to the complexity of a large organization like UCLA and the ways in which staff add to the value and success of such entities.

Providing staff members with information about resources, services and opportunities to help them succeed in the workplace is one of the primary reasons why Staff Assembly exists and one of the key reasons why Baldwin wanted to get involved, he said.

Among these resources are its annual staff scholarships and awards, which support professional training for recipients who receive up to $500 to fund classes, courses, workshops and conferences related to career development, and recognize excellence in service, faculty-staff partnerships and volunteerism.

Staff Assembly typically gives out 20 to 25 staff scholarships each year, with funds coming from sources such as its small business resource fair, which is held each January, it’s annual True Bruin Move and Groove Virtual 5k run, and a Spark campaign that was introduced in 2017 and raised more than $2,200. A portion of the proceeds generated from the Oct. 27 Oktoberfest event will also be directed to staff scholarships.

As a past staff scholarship recipient, Baldwin knows the role these awards play in encouraging employees to advance their skills and expertise.

“I know from personal experience that it does help and can propel staff members to really push through the programs they’re interested in,” said Baldwin, who applied his scholarship toward his master’s program.

Walen Ngo, last year’s president, recalls meeting Baldwin at a Staff Assembly breakfast with the chancellor. There, said Ngo, Baldwin posed some insightful questions and left Ngo with the impression that he was someone who had the potential to contribute to the organization in a big way.

Ngo was pleased when Baldwin ran for president.

“He is very eager, very smart. He has a lot of concern for staff and he truly cares. He’s always looking to connect the bigger picture and he’s not afraid to take chances,” Ngo said. “He’s willing to give new ideas a shot.”

Baldwin said being part of the board is a great opportunity to use the same talents that are used in one’s day-to-day work responsibilities, or serve as a springboard to develop new skills and areas of competency that may lead to other job opportunities on campus.

“Being on the Staff Assembly board isn’t extracurricular, it’s co-curricular. It’s meant to complement the work we’re all already doing,” Baldwin said. “The demands of our day jobs take priority, but we also know that the effort we give is just going to make Staff Assembly that much better. Like everything, you get out of it what you put in.”