Before a colorful backdrop of flags, UCLA Chancellor Gene Block, student cadets and midshipmen, and community members gathered on campus today to express their appreciation to veterans and their families for their commitment and sacrifices made in service to our country. Speaking at the event was Johnnie Ashe, a retired captain in the U.S. Marines and the brother of tennis legend and UCLA alumnus Arthur Ashe. Nearly 50 years ago, Johnnie Ashe signed up for a second tour of duty in Vietnam so that his famous brother didn’t have to go and could continue his successful tennis career.

“All of us owe our veterans a debt of gratitude, and it is one we can never fully repay,” said Block at the 10th annual Veterans Day ceremony at Wilson Plaza. “You take enormous risks, and you play an essential role. And just as you’ve been there for us, we need to be there for you.”

The chancellor noted that during the past year, UCLA has deepened its investment in the UCLA Veterans Legal Clinic, the UCLA-VA Family Resource and Well-Being Center, and the Mental Health Addictions Center for Excellence, programs that support student and alumni veterans.

And the campus continues to search for ways to assist veterans, he said.

“UCLA is also helping establish an integrated, interdisciplinary fellowship and training program for homeless veterans,” said Block, “with a particular focus on the chronically homeless.” 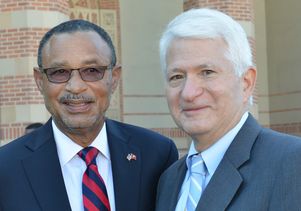 Ashe, who talked about his decision to return to Vietnam to keep his athlete brother, Arthur, from harm’s way, advised student cadets and midshipmen to always remember that, as officers, they have a heavy responsibility because the troops under their command will always represent them.

In addition to Ashe, Mitchell LaFortune, an M.F.A. student who served in the U.S. Army and the U.S. Defense Intelligence Agency, spoke.

Ten years ago, LaFortune joined the Army and was sent to Afghanistan and Pakistan, where he developed counterinsurgency strategy. He later worked alongside senior policymakers on Iran’s foreign policy issues. Now he hopes to be a filmmaker and is currently working on a project that examines violence, radicalization and the impact of war on combat veterans post 9/11.

UCLA’s annual salute to veterans began in 2007 when the campus dedicated a plaque to all UCLA students, alumni, faculty and staff who have died while serving in the nation’s military. The plaque is located on the north side of the Student Activities Center. It was inspired by the loss of Army 2nd Lt. Mark Daily, a UCLA alumnus who was killed in 2007 by a roadside bomb. The ceremony was followed by an information fair and the second annual Warrior Games.