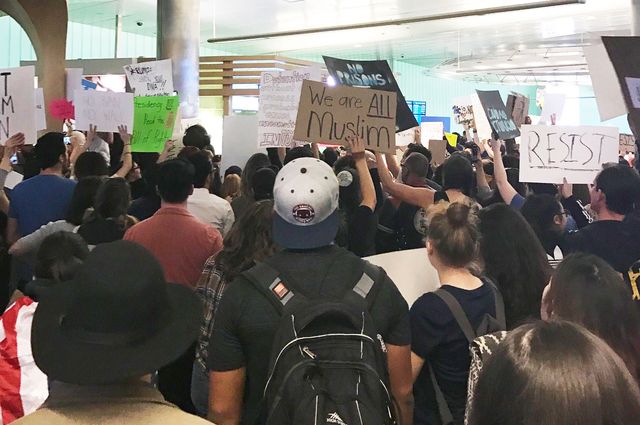 The controversial executive order, which has been temporarily blocked while the nation waits for a ruling from a three-judge panel from the U.S. 9th Circuit Court of Appeals, suspended refugees’ admission into the United States and temporarily barred entry of citizens from seven mostly Muslim countries. The president maintains that the action is necessary to subdue the threat of terrorism, but activists see the move as a de facto ban on Muslims and people from specific regions who are improperly being singled out for their religion or country of origin. 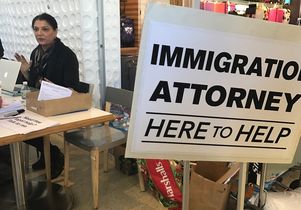 Immediately, 175 of his law school peers signed up and dove into a variety of tasks: translating documents about refugee and detainee rights into Arabic or Farsi, gathering donations of food and water for attorneys who were working on site, and compiling a list of people who could work as translators if more are needed.

“I couldn't bear the thought of trying to explain to my future children why I didn't stand up and do something while families were being ripped apart a few miles from my home,” said Homandberg. “This is one of the gravest injustices I have ever seen in our nation, and it is not the America I love. It is terrible having to be a part of this.”

Jessica Franey, a third-year UCLA law student, joined colleagues from the student-run El Centro Legal Clinics and spent four hours at the Tom Bradley International Terminal. Volunteers from other Southern California law schools joined UCLA law students in preparing flyers and supporting the work of attorneys from the American Civil Liberties Union and Public Counsel. They also participated in the protest at the terminal.

Franey said that 17 detainees were released while she was there, but officials have not said how many people were held. “It feels like democracy is being dismantled right before our eyes,” she added. “The protest was inspiring and effective, but I wish I could do more.”

In a separate effort, third-year student Cat Zhang attracted more than 100 volunteers for an initiative to support the ACLU, whose lawsuit in New York resulted in the first of several orders in which federal judges temporarily blocked detentions of travelers. UCLA law students versed in immigration law have been working full-time at the ACLU in Los Angeles, fielding calls from people experiencing international travel problems. 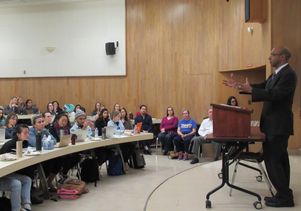 With the help of ACLU of Southern California Legal Director Ahilan Arulanantham, Zhang and her classmates are also working to identify other projects in which law students can play an active role. Arulanantham, the inaugural visiting scholar in UCLA law school’s Critical Race Studies Program, spoke on the topic “From 9/11 to Trump: Tales and Thoughts from Fifteen Years of Advocacy on Immigrants’ Rights and National Security” before a packed lecture hall on Jan. 30.

“This shouldn't just be a political issue; this is a constitutional issue and a humanitarian issue,” said Zhang, whose parents are immigrants. She cited the Chinese Exclusion Act, which barred immigration to the U.S. from China for more than 60 years until it was repealed in 1943. “As unacceptable as Trump's immigration policies are, our silence on this issue is just as unacceptable. Let’s not forget our tumultuous history in America and allow the same to happen again.”

“We have students here at the law school from more than 30 countries around the globe, and being a diverse and inclusive community is central to our identity as a public law school,” said Jennifer Mnookin, dean of UCLA Law. “Lawyers and law students are especially well-suited to make a positive difference during uncertain times like these. I am proud to see our students using their passion and their talents in service of their beliefs.”

This story appears on the UCLA School of Law website.