UCLA alumnus Joshua Kim knew he wasn’t straight when he was 5 years old. But he wasn’t sure he was gay, either. He liked boys, and he liked being a boy, but he also recognized a feminine side in himself that he found comfort in expressing, but was pressured to suppress.

With his parents, culturally conservative Korean immigrants, he remained closeted until just before college. However, when he first tried coming out to friends at age 13, the message was clear.

“Everyone told me, ‘If you’re not straight, you’re gay,’ while I was still figuring myself out, and the word ‘queer’ was only used as an insult,” Kim said. “But now, for a lot of younger kids, the word ‘queer’ means freedom. I can’t imagine what it would have meant when I was 5 to know that I could explore my personality in all its different ways.”

By the time he graduated from UCLA in 2019, queerness was part of his identity. The open-ended quality of the word, he said, creates room for growth and change over time, instead of another box to fit your identity into.

That sense of inclusiveness, and making room for the whole person, is part of why UCLA’s LGBTQ Campus Resource Center added the Q to its name shortly before the coronavirus quarantine began. Former students Jack Lam and Emmanuel Romero, with then-program coordinator Kevin Medina, oversaw a 2018 survey that found many UCLA students identified as queer, launching the slow but certain name change. With the center marking its 25th anniversary on Oct. 15 in the middle of National Coming Out week, the Q is part of the center’s ongoing growth, said center director Andy Cofino.

The center evolves with the times

“If you look at centers like ours around the country, there’s an evolution of names, because there’s an evolution of understanding and vocabulary,” Cofino said. “First it was lesbian and gay centers; next came bisexual; then LGB added the T for transgender. There are many students who identify with the Q and don’t identify with the other letters.”

And while “queer” used to be primarily a slur, the community has reclaimed it as an intentionally vague, expectation-free, inclusive word, but also a word of liberation and empowerment, Cofino said.

“Turning things on their heads and playing with gender and playing with language is who we are,” Cofino said. “We don’t conform to what society expects of us, and that’s a beautiful thing. So why not reclaim that? This word that other people think is ugly and have used to make us feel ugly — this word is actually beautiful. We’re not afraid to show that in the language that we use to describe our experiences, in the way that we dress, and the way that we love.”

The center’s academic counterpart, UCLA’s 23-year-old LGBTQ studies program, provides the curricular framework, while the campus center provides the student life approach. From welcome week events for new students to lavender graduations, the center offers students mentorship and a place to gather with peers, while also advocating for the campus LGBTQ community. The center works to identify and address obstacles and concerns related to LGBTQ student life, such as helping remove the requirement that students use their legal names on their student ID cards. Cofino also serves on the UCLA taskforce ensuring compliance with California’s Gender Recognition Act.

Kim helped set up the group Queer Peer Counseling at UCLA for the center, where he found understanding.

“The center is a place where I don’t have to explain myself,” he said. “Even people who are very accepting ask so many invasive questions. ‘How did you know? Are you sure?’ They don’t mean to be invasive. But in the LGBTQ center, I don’t have to alter myself to be more palatable, and when people are open about my queer identity, I can be open about my other identities as well; I’m Korean, I’m the product of immigrants.”

Students can embrace their identities

Fourth-year student Sohini Halder didn’t get involved in the LGBTQ Center until her sophomore year. Despite knowing she was bisexual for years and being out in high school, her more-conservative Indian upbringing kept her closeted among some parts of her community. Even as a member of her high school’s Gay-Straight Alliance, she struggled with imposter syndrome, worrying that being bi wasn’t “queer enough” to be part of the LGBTQ community.

“When I found the center at UCLA, it gave me such a feeling of belonging that I hadn’t had before,” Halder said. “Here was a community of people at UCLA who understood everything that I’d gone through. Here were people saying, we are enough. In a society where it’s almost normalized to feel bad about yourself, it’s so bold and revolutionary to love yourself without condition, and that’s what the center does.”

Now she’s an outreach intern, a volunteer on the center’s advocacy committee, facilitator of the Bi-Pan-Fluid group and part of peer allyship trainings. “Queer” is big enough to include her, after all. The next step is making sure others feel included, she said. A QTBIPOC space (queer and trans Black, Indigenous, and people of color) is one example of how the center focuses on anti-racism, she said.

“People are still expected to fit heteronormative ideas, where it’s OK to be gay or trans but only if they’re not breaking too many other norms — as long as they’re not too gay, too feminine, too butch,” Halder said. “But trans women of color are at the center of our movement. The Stonewall uprising was led by trans women of color, who are by far the most marginalized in our community, the most at risk, the most likely to be ignored. None of us would be here without them.” 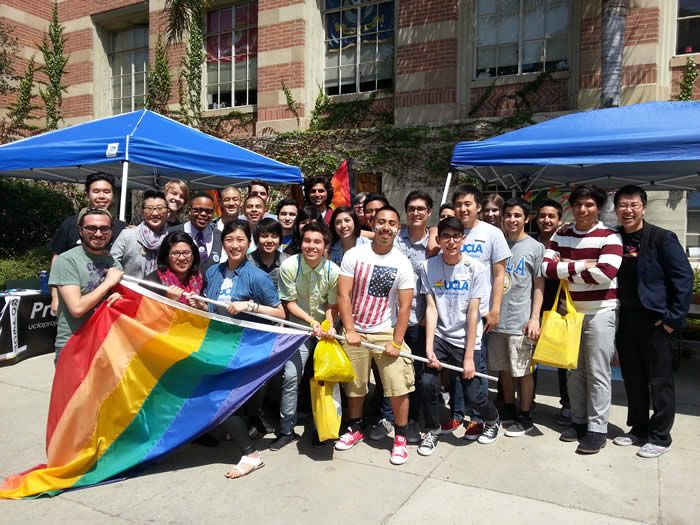 UCLA
For 25 years, the center has been a place for students to explore and celebrate their identities in a supportive environment.

Adding the Q is definitely intended to signal that greater inclusivity, Cofino said.

It’s an important update and one that honors changes in the broader community, said fourth-year nonbinary and transgender student Kai Huang, who uses they/them, he/him, and ze/zir pronouns interchangeably.

Huang joined the center during their first year at UCLA, and they are now an outreach intern and co-founder of the center’s advocacy committee. The center is a place where he can hang out between classes, but it is also a fount of resources that helped him with scholarships, counseling and more.

“I’ve met so many friends through the center,” Huang said. “Being involved in LGBTQ student life at UCLA whether through the center, through student orgs, or simply through being in community, has made UCLA feel more like home to me. The center has been a place where I know I will be respected and seen in all of my identities.”

While the center’s 25th anniversary celebration will spend some time looking back, it’s also a time to look forward, Halder noted.

If the past is any indication, the LGBTQ Center’s continued evolution and inclusion seems certain.