This is an article from the archives. Links and some facts and findings may be outdated.
UCLA Newsroom | May 23, 2013 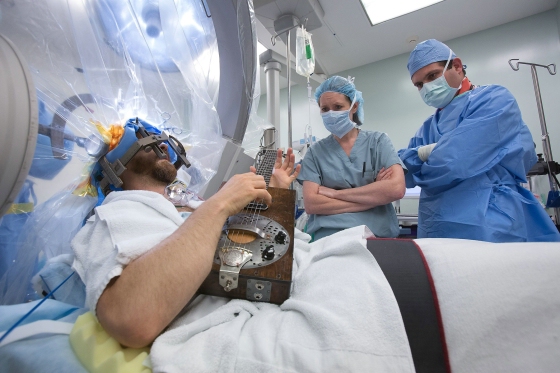 Reed Hutchinson/UCLA
A team of UCLA Health System brain specialists implanted a brain pacemaker in a 39-year-old man on Thursday. It was the 500th such procedure the team had completed, but the first time the group had invited followers to observe the procedure on Twitter. Updates with Instagram photos and short video clips were posted using the hashtag #UCLAORLive.
The procedure stimulates an area of the brain and implants a brain pacemaker to treat Parkinson's disease and essential tremors. During Thursday's operation, which was overseen by Dr. Nader Pouratian, the patient was awakened and asked to play a guitar to assist the team in placing electrodes into position. Dr. Pouratian is director of the UCLA Functional and Movement Disorder Program.
Brad Carter, the patient, is a Los Angeles-based actor, musician and stand-up comedian who developed hand tremors in 2006. He had lost the ability to perform, but after the brain stimulation portion of the surgery, his detxerity on the guitar was much improved. Carter gave his authorization for the surgery to be shared via Twitter and the social media outlet's Vine video application.
UCLA live-tweeted the surgery with the hope that it would help alleviate future patients' fear of the procedure. About 10 million Americans live with essential tremors and more than 1 million suffer from Parkinson’s disease. Many UCLA patients have found deep brain stimulation beneficial in stopping the tremors and helpful in enabling them to lead normal lives.
Before the procedure began, the patient explained what notes he would be playing on the guitar.
He was prepared for the surgery, which would open his brain while he was under anesthesia.
After the brain was exposed, the patient was awakened so that the team could precisely position electrodes.
His guitar playing sounded good in the operating room.
The patient's tremors were already much improved during the surgery.
About six hours after Carter was prepped, the procedure was over.

Time to close up. The patient will have the battery placed in two weeks. The implanted system will be… instagram.com/p/Zqmn0_RI_p/
— UCLA Health(@UCLAHealth) May 23, 2013