With a goal of making the campus safer for pedestrians, bicyclists and drivers, UCLA has reduced the campus speed limit to no more than 20 mph.

“This is mainly about increasing the safety of the 70,000 people on campus, most of whom are pedestrians at some point each day,” said Dave Karwaski, UCLA Transportation’s senior associate director of planning and traffic. “There’s research showing that if a pedestrian is hit, whether the car is going 20 or 40 miles per hour makes a significant difference in whether it’s fatal.”

UCLA Transportation launched its “20 is Plenty” campaign on Sept. 26, when the new speed limit took effect. All campus streets are included, including large streets like Charles Young Drive, which circles campus; Westwood Plaza, which flows seamlessly from Westwood Boulevard onto campus; and Kinross Avenue between the Gayley alley and Veteran Avenue in Westwood Village.

Only speed limits above 20 mph have changed, and 10 mph and 15 mph limits remain in place. City streets, such as Sunset Boulevard, Gayley Boulevard and Hilgard Avenue, are not affected unless and until they cross into campus, as Strathmore Drive does.

UCLA Transportation has been gradually lowering the speed limit to acclimate the campus community to slower driving speeds. In addition to increasing safety, the lower speed limit is expected to help make the campus healthier overall by encouraging more people to walk, bike and use other active forms of transportation, such as the new UCLA Bruin Bike Share.

“For years, UCLA Transportation has worked with its campus partners to transform the car-centric campus built environment to a more walkable, bike-able, livable campus,” Karwaski said. “By doing things like creating new high visibility bike lanes, contra-flow bike lanes and enhanced campus crosswalks, we know that people will walk and bike if you provide an environment that makes them feel safer. And there’s a health factor too — a more pedestrian- and bike-friendly campus increases people’s activity levels and reduces air pollution and greenhouse gas production levels.” 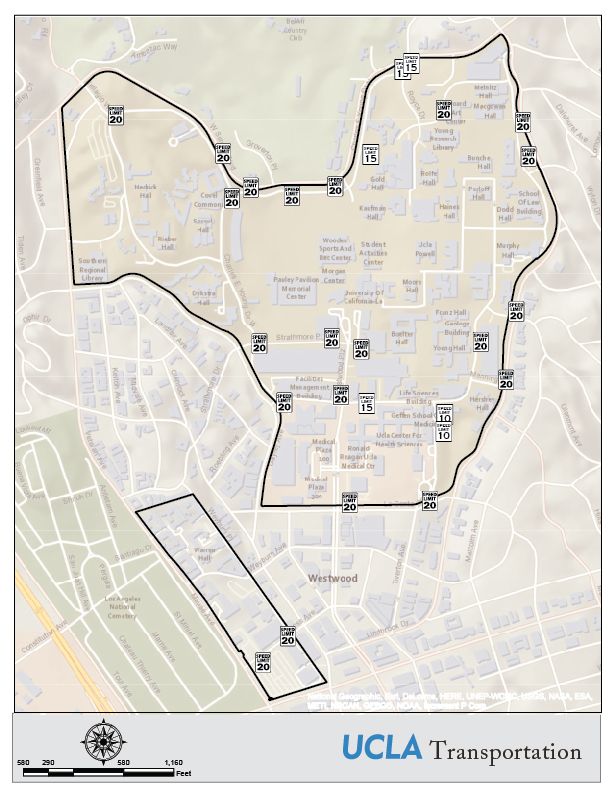