Sophia Cesaro, on staff at UCLA’s Fowler Museum as events and visitors services manager, is about to outdo herself with an event that brings together thousands of tons of sand, hundreds of millions of gallons of water, marine biologists, spearfishermen and 125 new Bruins.

On Monday morning, Sept. 19 in Venice, Cesaro is turning the day’s task of a beach cleanup into an eye-opening conversation with people whose passion for ocean conservation runs deep.

Cesaro’s efforts are part of UCLA’s eighth annual Volunteer Day, which will dispatch 7,200 Bruin volunteers, including more than 6,500 incoming freshmen and transfer students, to perform community service at 50 sites throughout Los Angeles.

This will be Cesaro’s first-ever experience with Volunteer Day, but she’s certainly no stranger to volunteerism. For the past two years, she has given generously of her free time to serve as president of Hermosa Beach-based nonprofit OceansGlobal. During the beach cleanup, she will fill the role of community partner representative for the organization and will orchestrate the day’s activities in collaboration with project leader and third-year student Zack Beauchamp. 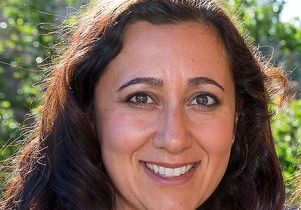 Cesaro’s contribution will be bringing to the beach environmental activists from organizations like Heal the Bay and the King Harbor Ocean Enhancement Foundation, marine biologists and researchers like underwater nautical archaeologist and UCLA alumna Brooke Basse, and an assortment of surfers, photographers, restaurateurs and spearfishermen. Each with their own perspective, they will serve side-by-side with the students in the cleanup effort, while also talking with them about the impact the ocean has on their lives and the crucial importance of ensuring the ocean’s health.

“We want to give the students a broad overview that connects the dots between people who are working on conserving the ocean, people who enjoy the ocean recreationally and those for whom the ocean is their livelihood,” Cesaro said.

For her part, Cesaro looks forward to telling students about everything OceansGlobal supports, including a program that raises white sea bass in a fish hatchery in Redondo Beach and releases them into the Pacific Ocean at nearby King Harbor. Part of a California Department of Fish and Wildlife program, the effort was launched 20 years ago when the ocean’s white sea bass population dwindled to very low levels.

But that’s not a problem, Cesaro said. For one thing, explaining the situation to the students will give Cesaro and her ocean conservation partners an opening to talk about the Coastal Commission’s multi-faceted efforts to protect the California coast and oceans.

A pristine beach will also prompt a slight relocation of the cleanup operation to the Venice Beach boardwalk and adjacent streets and parking lots, where no shortage of cigarette butts, plastic bottles, candy wrappers and other trash can be found. Cesaro said this will provide an opportunity to talk about how trash across the street from the beach can easily end up there with a swift kick of wind, just as toxic waste dumped into a river hundreds of miles inland can work its way to the ocean, endangering the plants and creatures who live there.

“I’m very aware of how much of my everyday life is affected by the health of our oceans,” said Cesaro, who grew up on the East Coast and spent time at the Jersey shore enjoying the Atlantic Ocean. Ten years ago, she moved to Hermosa Beach, where the beach has become a prominent part of her life.

“We want the students to ask themselves what the ocean means to them,” she said, adding that a young man, Kirk McNulty, “who was inspired by everything ocean” was the impetus for the founding of OceansGlobal in 2014, the year McNulty died from a drug overdose.

“For me, the ocean is a happy place … and a platform to give back to something that makes me happy,” said Cesaro, for whom “giving back” is a lifelong mission. Since has dedicated her skills in event planning, project management, marketing, fundraising and more to her work with nonprofit organizations, the Fowler among them.

Cesaro wants to tell students on Volunteer Day “about how I make a career of being able to do what I love. With this, I am continuously giving back to things that I feel passionate about.” And, she will tell them, they can choose to do the same.

When this year’s Volunteer Day comes to an end, she hopes some of those young Bruins will feel inspired to join “any of number of great organizations that are conserving our oceans and doing important environmental work.”