About two months ago, a group of UCLA geophysics students watched fountains of bright red-orange lava at Kilauea volcano as they erupted from Halemaumau crater. At the time, the volcano was another fascinating and beautiful geological feature to study. Since then, however, Kilauea has become much more active, and more dangerous.

Spurred on by more than 100 earthquakes that followed the magnitude 6.9 earthquake on May 5, more than 20 fissures have opened up along the western coast of the big island of Hawaii sending lava into surrounding neighborhoods. On May 17, an explosion sent ash 30,000 feet into the sky as magma interacted with the water table. More than 1,800 residents have been evacuated from Leilani Estates and Lanipuna Gardens, and the governor has declared a state of emergency.

Even at the time of their trip in March, Paul Davis, professor of geophysics at UCLA who led the excursion, and his students noticed abnormalities in their observations.

“The increased activity we did witness was part of the build-up to the activity we’re seeing now,” Davis said. He added that the kind of research he and his students conducted on the trip can help scientists learn more about how to predict eruptions like this.

“We need to understand magma pathways, in order to interpret the way Earth’s surface is deformed and that can help us determine where and when the magma will break out on the surface,” said Davis, who has been studying volcanoes and plate tectonics for 30 years to better understand geology on other planets. 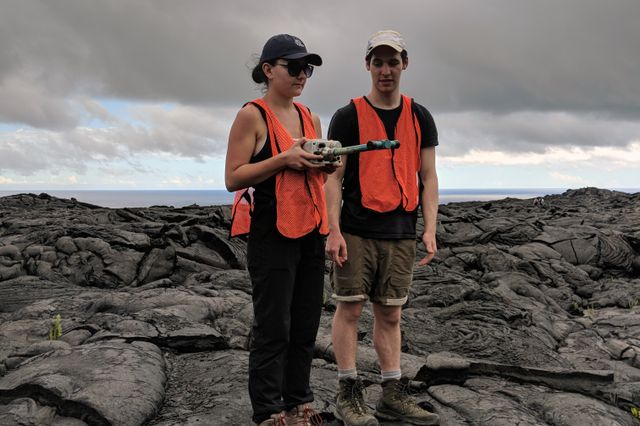 The lava, which has destroyed several dozen structures, has been erupting since May 3. The problem has only continued to worsen, and as Davis pointed out, it’s uncertain how long this will continue.

“I am deeply saddened by the destruction of people’s homes from the recent eruption. The research that is done on the volcano is intended to help better understand what is happening and hopefully predict paths that flows might take,” said Fiona McCarthy, a third-year geophysics major who was one of the 11 students who went.

Davis and researchers at UCLA have been taking measurements across a dike — a vertical sheet of rock that is a result of magma fracturing the surrounding rock and intruding into the crack, which causes the dikes to resemble veins throughout rock formations — formed in 1973. UCLA geophysics classes made similar trips in 1995 and 1997. Taking measurements helps researchers understand the geophysics of an erupting volcano and provides long term data to compare Hawaii with other planets, and in particular, Mars.

The most recent trip was the beginning of a quarter-long capstone course, and the culmination of a geophysics degree at UCLA. In the past, students have also been to the San Andreas Fault on the Carrizo Plain in central California; Long Valley Caldera, near Yosemite; an area that stretches from Acapulco on the Pacific coast to Tampico on the Gulf coast of Mexico; the Andes in Peru; and Mount Etna in Sicily, trips partly funded by generous donations. Students were able to put all of their theoretical knowledge into practice as they traversed volcanoes and hiked through the Hawaiian forests to gather data.

“I was able to finally actually see field work being done, collect data, and now I am fitting models that I have read about for the past couple years to that data. That's pretty incredible to see,” McCarthy said. “This definitely feels like what I will be doing in the future if I do end up going to grad school or even just out in the workforce.”

The typical daily schedule mirrored that of a working geophysicist, she said. They would wake up at 6 a.m. for breakfast at 7 on a military base, and then the group would head out for the day hiking to lava fields or driving to the top of Mauna Loa, the largest active volcano on Earth. 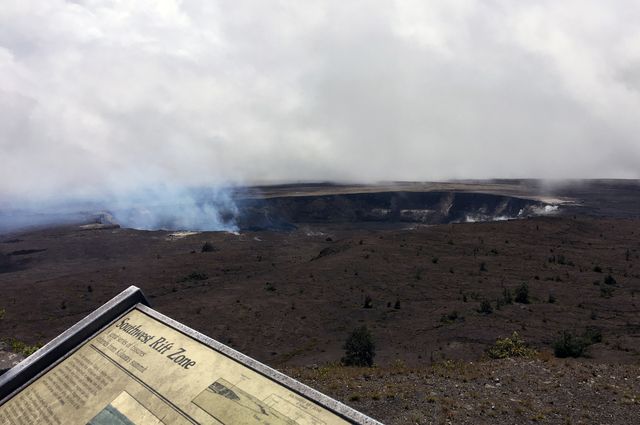 UCLA
View of Halemaumau crater on Kilauea volcano’s summit at the end of March before it filled with lava and overflowed.

While in the field, the UCLA students would take readings with a variety of tools and devices. They used very-low-frequency electromagnetic meters and magnetometers to study the Earth’s magnetic fields. They also used self potential probes to measure the electrical potential in Earth’s minerals and gravimeters to monitor the difference in the force of gravity from one place to another. Once they returned to camp in the evenings, the team would upload their data to their computers.

“The very-low-frequency electromagnetic meter and self potential probes helped us understand what was going on with the water table under the surface. Gravity measurements were taken over Mauna Loa to see how the volcano might affect Earth’s gravity. The magnetometer measured Earth’s magnetic field locally at the volcano to see how it may perturb Earth's magnetic field,” fourth-year geophysics major Aaron Tannenbaum said.

According to Davis, part of the uncertainty with how eruptions will continue is the nature of lava itself. When it’s underground (and referred to as magma), it progresses unevenly to the surface. Also, he said, eruptions can be episodic rather than continuous due to blockages or changes in the Earth’s surface.

“Some conduits are blocked and it takes time for the pressure to build and break the blockage,” Davis said. “Water can seep in from a crater lake or the water table and cause stream generation and pressurization. Water seeping in from the water table at Halemaumau is thought to have caused the May 17 ash eruption of Kilauea.”

Studying the current eruptions will provide extremely valuable data on the geophysical conditions that occur before a new eruption, Davis said. For example, radar images from satellites show how the ground deformed because of magma intrusion and the magnitude 6.9 earthquake on May 5. 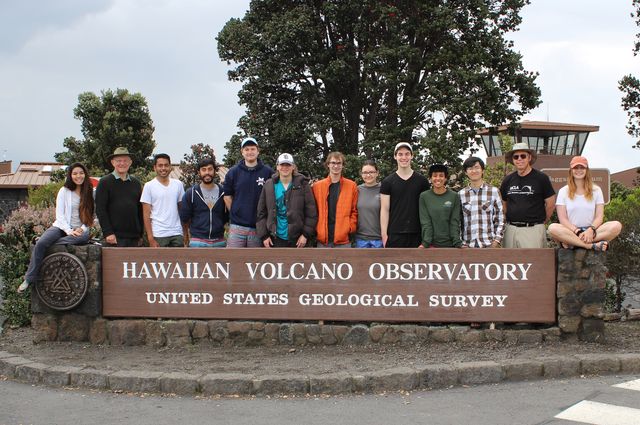 Students will spend the remainder of the quarter comparing the measurements from Hawaii to Olympus Mons on Mars. Both the volcanoes demonstrate similar anomalies and studying both volcanoes will help further understand and prepare for future eruptions.

Taking geophysics students into the field is the best way to prepare students for a myriad of opportunities, whether they are hoping to study natural disasters like volcanic eruptions and earthquakes, to work at NASA studying other planets and exoplanets, to search for resources, or to monitor Earth’s environment.  According to Davis field experience, along with data analysis, comparison with theory and hypothesis testing, is the best preparation for such future pursuits.

“The problem-solving skills I have learned from the day we got on the plane until now are priceless, and I am sure there are plenty more lessons to learn and lots more coding to do,” McCarthy said.