As the UC system marches toward its goal of carbon neutrality by 2025, UCLA is doing its part by using less energy per square foot of buildings than in 1990, converting half of its campus fleet to alternative-fuel vehicles and growing its roster of LEED-certified green buildings.

Last year marked the launch of UCLA’s groundbreaking Grand Challenge project, a university-wide research initiative that unites faculty from 70 different departments and centers behind one central goal: to move the Los Angeles region to 100 percent renewable energy and 100 percent local water by 2050.

Meanwhile, the University of California quietly met an important milestone in 2014: As a system, it successfully reduced greenhouse gas emissions to the same level as 14 years ago. It also took several major steps toward achieving carbon neutrality by 2025.

First, UC became a provider of electric service and wholesale power, which will help it choose cleaner power sources for the electricity it buys. As of this month, UC is directly supplying power to five campuses, three medical centers and other electricity accounts throughout the system. Although UCLA’s local utility does not yet allow for a similar arrangement, the campus already produces enough clean, efficient, coal-free energy to meet about 75 percent of its needs with the cogeneration plant.

UC also made the largest solar-power purchase of any higher education institution in the country. Once the new solar arrays come online in 2016, about 15 percent of the electricity used by UC will come from the sun.

These actions are crucial to UC's efforts to ramp up its use of renewable energy sources, a cornerstone for reaching zero-net greenhouse gas emissions from its buildings and vehicles by 2025, the goal of UC President Janet Napolitano's Carbon Neutrality Initiative.

In June, Napolitano appointed experts from inside and outside UC to a Global Climate Leadership Council and charged the group with mapping a strategy for the university to meet its carbon neutrality and related sustainability goals. 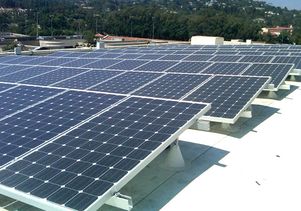 In October, the council's applied research working group convened a workshop at UC Santa Barbara to set research priorities. Participants included researchers and sustainability managers from all 10 UC campuses, the Division of Agriculture and Natural Resources, and the UC-affiliated national laboratories at Berkeley, Livermore and Los Alamos.

Among their recommendations: Focus on research to expand the use of biofuels; develop smart building-management systems to improve energy efficiency; and advance battery storage technology to enhance the use of solar power.

"Our efforts during 2014 exemplify the University of California’s leadership in sustainability," said UC Executive Vice President Nathan Brostrom, who is presenting UC’s Annual Report on Sustainable Practices to the Board of Regents today. “We made great strides toward carbon neutrality and harnessed the entire university — our students, staff, faculty and researchers — to pursue this daunting challenge.”

UC's green efforts have not just been good for the environment — they are also saving the university money. An energy-efficiency partnership with the state’s investor-owned utilities that began in 2004 has allowed UC to avoid roughly $28 million in annual costs, totaling about $140 million in savings cumulatively, according to the annual report. Through the partnership, UC received $7.1 million in incentives during 2014, helping defray costs for 80 energy-efficiency projects on UC campuses.

UCLA has made considerable progress toward meeting its own goals. In 2013, the campus reduced its greenhouse-gas emissions, in part due to continued energy efficiency efforts. Also In 2013, UCLA earned seven new LEED certifications for green buildings, including the iconic Pauley Pavilion and the Kinross Recreation Center.

UCLA also rolled out its energy audit program in 2013, auditing 10 buildings and identifying 85 energy conservation measures, which, when completed, will result in $1.8 million in energy savings. In 2014, with the addition of 41 donated electric vehicles to its fleet, UCLA achieved its goal of having 50 percent of its fleet powered by sustainable, zero-emission fuels. For its 30-year commitment to alternative transportation, UCLA Transportation received California's highest environmental honor, the 2014 Governor's Environmental and Economic Leadership Awards, sponsored by the California Environmental Protection Agency.

Meanwhile, UCLA’s Grand Challenge project is already extending its reach campuswide. Students, for example, have interviewed faculty to identify opportunities undergraduates can participate in. And Grand Challenge is building on living-laboratory projects that are already in the works, like the one that’s evaluating how solar-powered electric vehicles can provide temporary electricity storage for the grid at peak times.

With the launch of the President Napolitano’s Global Food Initiative, UCLA began building campuswide collaboration toward meeting the goals of the initiative, the campus sustainability program and the Healthy Campus Initiative — a program launched in 2013 to promote a culture of mental and physical health and wellness, and to encourage healthy lifestyle choices among UCLA students, staff and faculty. The new Bruin Plate dining hall, which has the highest percentage of local and sustainable food among campus dining halls, won a best-practice award at the California Higher Education Sustainability Conference. Dining Services also launched a fair where students met the farmers and companies that supply food to Bruin Plate.

A sense of urgency

Although carbon neutrality had been a long-term goal of UC's sustainable practices policy, Napolitano has galvanized efforts across the system by setting a 2025 deadline. It’s fostered a sense of urgency and is spurring an unprecedented a level of systemwide collaborations, said David Auston, executive director of the Institute for Energy Efficiency at UC Santa Barbara and co-chair of the systemwide workshop held in October.

“It is really energizing students, staff and faculty,” Auston said. “And a great example of leadership on the part of President Napolitano to get us moving forward.”

“A bold commitment to carbon neutrality is at the core of climate leadership,” said Timothy Carter, president of Second Nature, which oversees the American College and University Presidents’ Climate Commitment that has been signed by all 10 UC chancellors. “Scaling campus commitments across a state system like UC moves the needle even further.”

Read the complete annual report on the UC sustainability website.