Christophe Carter, a 73-year-old Vietnam veteran, was once homeless and struggling with a sleep disorder and obesity, when a visit to the U.S. Department of Veterans Affairs West Los Angeles campus began to turn things around.

The V.A. connected the Army veteran with housing, and a doctor recommended exercise. Carter hated “gyms and barbells,” so he looked for alternatives at the V.A. “The only class they offered, besides barbells and machines, was this mysterious martial arts class — tai chi,” he recalled.

“A few months after I started tai chi, I lost 20 pounds, and I could sleep through the night,” Carter said. That gave him the confidence to perform a song at the class’s Christmas party, reigniting his passion for singing. And that inspired him to sing at his neighborhood’s holiday party, where he made friends and began dancing with a class held at his local park. “Those dance moves came from tai chi. The tai chi class has reconnected me to the things I enjoyed.” 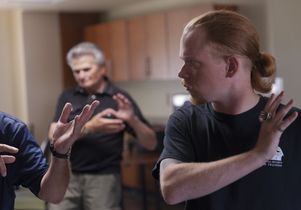 John Vande Wege/UCLA
Tai chi, said one veteran, reconnected him to activities he enjoyed in the past.

These mental and physical improvements are the reason behind a series of therapeutic recreation classes offered recently by UCLA to veterans at the V.A.’s West L.A. campus. In a pilot project that just ended, but could return on a permanent basis, UCLA Recreation instructors taught art therapy, creative writing, and a combination of tai chi and qi gong.

“UCLA has a number of programs for veterans on campus, but in an effort to enhance their overall well-being, a new program was launched in spring to meet veterans where they are,” said Wendy Windsor, director of UCLA Recreation, who credited Chett Miller, instructional programs coordinator on her staff, with building the program. “When we learned that we had several instructors with the experience and desire to provide recreational therapy to vets, the program clicked into place. We’re committed to supporting the health of the mind and body, and it’s gratifying to share that at the V.A.”

The tai chi and qi gong class has a long history, said tai chi master and UCLA instructor Peter Asco, who was excited to return to the V.A. campus, where he has taught before. Asco’s returning students said the class has improved their flexibility and balance, as expected, but also helped some of them lower their blood pressure, control their diabetes and eliminate the need for costly and invasive surgeries. They also experienced better mental health, including an increased sense of serenity that lasts throughout the day.

“Tai chi relaxes me in a way that other things don’t,” said Corey Huckabay, a 26-year-old Army veteran who served in Iraq and now works as a bouncer. “You stop thinking about your troubles and dramas. I do it for one of the same reasons that I ride a motorcycle — you can’t do either one effectively if your mind is somewhere else.”

Asco has seen dramatic improvements in his students over the years.

“This isn’t recreation — this is healing the mind, body and spirit,” he said. “People come to the class with one thing they want to change, like improving their balance. Then they find out it changes their whole life.”

The creative writing class has proven to be the most popular of the three UCLA classes, and, because this is Los Angeles, the students range from novice scribblers to members of the Screenwriters Guild of America. UCLA writing instructor Robert Morgan Fisher, whose father was a career Naval officer, calls his students the UCLA “Wordcommandos,” and they call him “Gunny,” Marine Corps slang for a drill instructor. He provides instruction, suggests writing prompts, and brings in books and literary magazines for inspiration, but encourages his students to attempt any kind of writing. His goal is to help them successfully submit their work for publication.

“We have some vets who have seen some intense tragedy, and we make sure to warn others if a piece of writing has a trigger of some kind,” like violence, death or explosions, Fisher said. “On the other hand, some of their stories are incredibly funny. … [The goal is] to help them put into words how they’re feeling, stories about what happened to them, stories they’ve made up — that’s a powerfully therapeutic thing.”

Students in the art therapy class have tackled watercolors, crayons, collages and more. The creative outlet lets them express emotions they may not be able to put into words, said UCLA art therapy instructor and artist Buena Johnson. She supports them in expressing joy or pain, but her favorite moments have been when the students tell her how good the class makes them feel.

“Some of them have told me that watercolors remind them of the good days when they were children, when they could really express and play,” Johnson said. “What’s been an eye-opener to me is how many veterans are homeless. I knew it was a problem, but I didn’t realize it was so extensive. Some of them live at the V.A., but after I learned one of my students lives in his truck, I realized I have no idea how many of them have a place to go after class.”

That realization made her restructure the class to make it more flexible, so she’s sure they all have a chance to get to the V.A. dining halls to get a decent meal.

But the vets in the classes describe the lessons as feeding a different need. Over and over, the students explained how the UCLA classes calmed their anxieties and gave them a place to focus.

That calm and focus, they said, have spread from the classes into other parts of their lives, making everything a little brighter.