Russell was presented the award from Acting NASA Administrator Robert Lightfoot at the 2017 NASA Administrator's Agency Honor Awards Ceremony at NASA Langley Research Center in Hampton, Virginia. The NASA Agency Honor Awards recognize individuals who have made “an extraordinary and indelible impact on the agency’s mission success and who help enable missions to explore and discover both our world and the universe.” 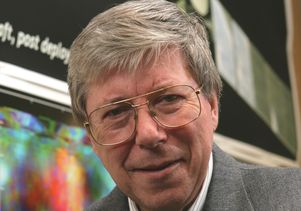 The Dawn Mission last year won the Robert J. Collier Trophy, awarded annually “for the greatest achievement in aeronautics or astronautics in America, with respect to improving the performance, efficiency, and safety of air or space vehicles, the value of which has been thoroughly demonstrated by actual use during the preceding year.” The list of Collier Trophy recipients represents a timeline of aviation, as many of the awardees mark milestones in the history of flight. Winners include Orville Wright in 1913, Neil Armstrong and his Apollo colleagues in the late 1960s and the Hubble Space Telescope Recovery Team in 1993.

Russell and the Dawn team were also honored last year at the National Space Club’s Robert H. Goddard Memorial Dinner in Washington, D.C., with the Nelson B. Jackson Award. In addition, the team received the Smithsonian National Air and Space Museum’s highest group honor, the 2014 Trophy for Current Achievement.

Dawn, launched on Sept. 27, 2007, is the first scientific mission to be powered by an advanced NASA technology known as ion propulsion. In March 2015, Dawn became the first mission to reach a dwarf planet when it began orbiting Ceres, the largest unexplored world between the sun and Pluto. Dawn is also the first spacecraft to orbit two solar system destinations, Ceres and the “minor planet” Vesta, the most massive objects in the main asteroid belt between Mars and Jupiter. No other spacecraft in more than 50 years of space exploration has left orbit around a distant solar system body to travel to — and eventually orbit — another extraterrestrial body.

“Dawn has changed the way we think about the origins of the solar system and the evolution of the asteroids which were the first to arrive on the scene,” Russell said. “I am proud of what the flight team has accomplished.”

UCLA is in charge of Dawn’s science and public outreach. The Dawn Mission is managed by the Jet Propulsion Laboratory, a division of the California Institute of Technology, for NASA’s Science Mission Directorate. For more information about Dawn, visit www.nasa.gov/dawn and http://dawn.jpl.nasa.gov.