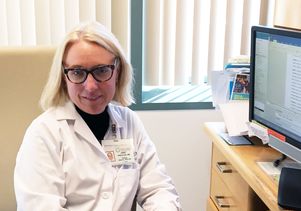 She was among nine women honored during an awards luncheon March 13 at the Music Center Grand Hall. Dr. Deborah Prothrow-Stith, an adjunct professor of medicine at David Geffen School of Medicine at UCLA, was also an honoree. They were saluted for their work in bringing about social and economic change.

“I am very proud of our programs to bring together academicians, researchers, policy makers and community advocates to address environmental issues and women’s health; the intersection between financial literacy and health literacy; and lesbian, bisexual, and transgender health,” said Pregler, who is also a professor of clinical medicine in the division of general internal medicine and health services research at the Geffen school. “I am proudest that our community and research programs are helping to train the next generation of leaders, clinicians and researchers in women’s health in Los Angeles County.”

The nomination for Pregler, submitted by the Office of Women’s Health Director Ellen Eidem, noted her decades-long efforts on behalf of women’s issues, including her work with immigrant and under- or uninsured women. Pregler has served as a role model in many areas, including health care access, reproductive health and the environment, research and gender disparities in health.

Pregler also serves on the Women’s Health Policy Council, which advises county's Office of Women’s Health, among other committees and panels.

“We are fortunate to have Dr. Pregler’s leadership for leading-edge clinical care, teaching and research at UCLA Health,” said Johnese Spisso, president of UCLA Health, CEO of UCLA Health System and associate vice chancellor of UCLA Health Sciences. “Her work sets the standard for patient-focused care.”

Prothrow-Stith, who was nominated by Los Angeles County Supervisor Mark Ridley-Thomas, is dean and professor of medicine at Charles R. Drew University College of Medicine. As a physician working in inner-city Boston, Dr. Prothrow-Stith broke new ground with her efforts to define youth violence as a public health problem.

She developed and wrote "The Violence Prevention Curriculum for Adolescents," a forerunner of violence prevention curricula for schools and communities. She is also the author of "Deadly Consequences," the first book to present a public health perspective on violence to a mass audience.