UCLA School of Law honored professors David Babbe and the late Skye Donald with the Rutter Award for Excellence in Teaching at a ceremony on March 8. 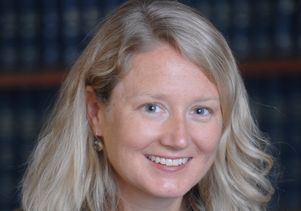 Babbe and Donald have earned praise from students and colleagues for their work as instructors in the law school’s experiential skills curriculum. Babbe teaches “Trial Advocacy and Negotiation” and has served as a mentor for UCLA Law’s award-winning moot court team. Donald taught first-year "Lawyering Skills" and upper-level clinical courses at UCLA Law for seven years before she died of brain cancer in October 2016.

Student evaluations shared at the event confirmed the honorees’ influence. Babbe was described as a witty and accessible teacher who imbued students with a sense of ethics and responsibility, offering nuanced education on the art of trial work. 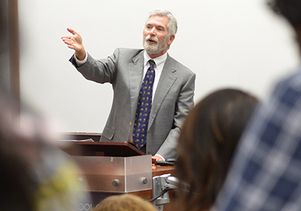 Donald was remembered as a smart, savvy and funny mentor whose impact on students went well beyond their legal skills. In Donald’s honor, UCLA Law has established the Skye Donald Memorial Fund and the Skye Donald Spirit of Community Award to recognize students who exemplify her dedication to the law and service.

The Rutter Award, founded by famed law-guide publisher William Rutter in 1979, honors professors who best serve law students at five top California law schools. UCLA Law Dean Jennifer Mnookin said the annual ceremony honoring Rutter Award winners “brings our community together to celebrate the faculty members who are models for our most important mission here at UCLA Law: educating, illuminating and inspiring the great lawyers and leaders of the future.”