UCLA scientist Lawrence Zipursky will receive Columbia University’s 2015 Louisa Horwitz Prize for discovering a molecular identification system that helps neurons to navigate and wire the brain. Since the establishment of the prize in 1967 as Columbia’s top honor for achievement in biological and biochemical research, 43 awardees have gone on to win Nobel Prizes.

Zipursky is a Distinguished Professor of Biological Chemistry at the David Geffen School of Medicine at UCLA and a Howard Hughes Medical Institute investigator. For the past three decades, his research has explored the genetic machinery behind the ability of neurons to form the networks of connections — synapses — that make up the neural circuits underlying an organism’s decision-making and behavior. In 2000, his lab uncovered a family of proteins called Dscam that have changed the way neuroscientists think about the processes involved in the brain’s wiring. 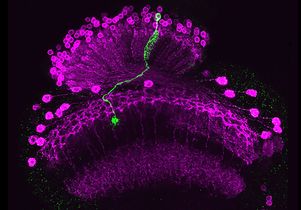 “Dr. Zipursky’s research has helped illuminate one of science’s biggest mysteries: How do our brains work, and how did they develop such incredible complexity?” said Columbia University’s Dr. Lee Goldman, Harold and Margaret Hatch Professor of the University, dean of the Faculties of Health Sciences and Medicine, and chief executive of Columbia University Medical Center.

Zipursky will receive the Horwitz Award at Columbia University on Nov. 12, when he will also present two lectures about his research.