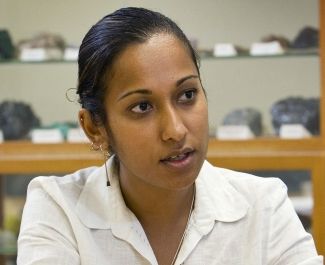 Aradhna Tripati, associate professor of earth, planetary and space sciences and also atmospheric and oceanic sciences, is an expert on climate change. She and colleagues have constructed an ancient climate record that holds clues about the long-term effects of Earth’s current levels of atmospheric carbon dioxide, a key contributor to global climate change. Tripati also developed a new technique to assess carbon dioxide levels in the distant past, enabling her and colleagues to study carbon dioxide levels over the last 20 million years.

Tripati, who is a member of the UCLA Institute of the Environment and Sustainability, also researches geology and tectonics, geochemistry and cosmochemistry, the impact of ocean acidification on marine invertebrates (pteropods, mollusks, coral, sea urchins) and changing coastal environments.