Prior to the 2020 U.S. census, many observers feared that large segments of the population would be undercounted. Those fears appear to have been realized, according to a UCLA analysis of the census data.

The study, conducted by the UCLA Center for Neighborhood Knowledge, found that in Los Angeles County, residents in some neighborhoods were much more likely than others to be excluded from the 2020 census. Specifically, the research (PDF) concluded that — at the census-tract level — undercounts were most likely in areas where the majority of residents are Hispanic or Asian, have lower incomes, rent their homes or were born outside of the U.S.

Paul Ong, a research professor at the UCLA Luskin School of Public Affairs, and Jonathan Ong of Ong and Associates, a public-interest consulting firm, combed through data published Aug. 12 by the U.S. Census Bureau.

“The results are, unfortunately, consistent with our worst fear that the 2020 enumeration faced numerous potentially insurmountable barriers to a complete and accurate count,” Paul Ong said.

The research team compared the information to earlier population estimates drawn from the census bureau’s American Community Survey to determine whether and where the 2020 enumeration appeared to undercount or overcount the population within each neighborhood in Los Angeles County.

A key difference between the American Community Survey and the 2020 census, Paul Ong said, is that the COVID-19 pandemic severely affected data collection for the census. Previous research showed that disruption was particularly pronounced in disadvantaged neighborhoods. That appears to have created a “differential undercount,” meaning that some populations were more likely than other groups not to be counted. That, in turn, means that the scope of ethnic diversity and demographic change in cities like Los Angeles could be significantly underestimated, he said. 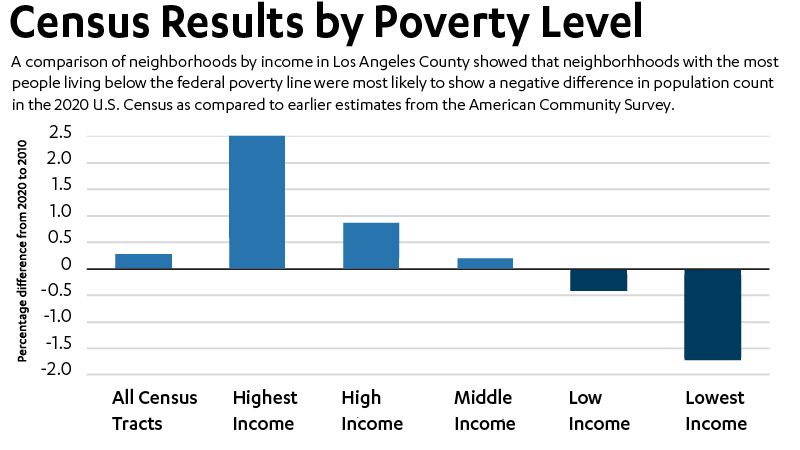 Based on comparisons between the latest census data and the most recent American Community Survey estimates, the UCLA study found that in Los Angeles County:

The pandemic wasn’t the only factor that hampered data collection for the 2020 census. The effort was also adversely affected by the Trump administration’s highly publicized push to include a citizenship question on the questionnaire. Although that effort was ultimately unsuccessful, Paul Ong said the controversy may have depressed participation among immigrants, whether they were undocumented or not.

“The findings indicate that the needless politicization of the 2020 enumeration seriously dampened participation by those targeted by the Trump administration,” he said.

Problems with the self-reporting aspect of the census placed greater pressure on the subsequent on-the-ground outreach in which census-takers canvassed nonresponding households. The success of that follow-up drive will not be known until a post-census analysis is conducted, which is scheduled for 2022.

The UCLA analysis is consistent with results from previous studies that have shown undercounts likelier to occur in disadvantaged communities. How residents are counted is important because census results influence legislative redistricting and government spending, which means the results can have serious political and economic implications.

“Given the analysis, it is imperative that we address the inequality in the census to ensure fair political representation in redistricting,” Paul Ong said.

Unlike previous corrective efforts, which address census undercounts based on national statistics and results from a comparatively small number of districts, the UCLA research relied on data specific to each neighborhood. As a result, Paul Ong said, the new approach should be more accurate and precise, and it could ultimately help officials understand how to adjust population statistics to account for the differential bias in completing the 2020 census and future counts. 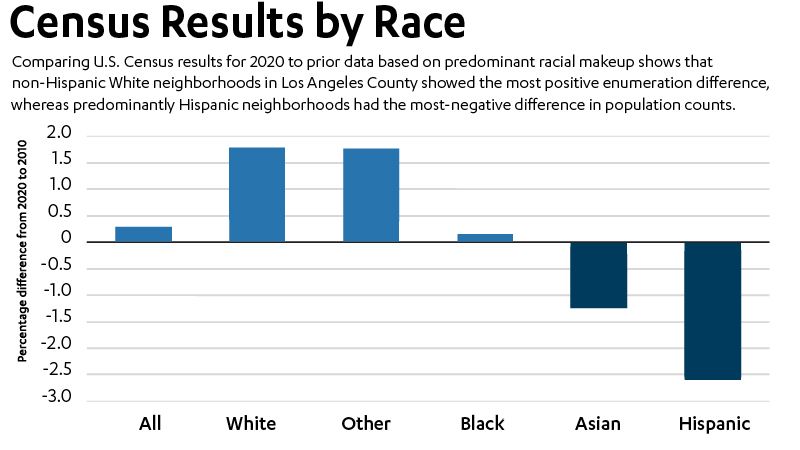 Undercounts are of most concern, but the technique could also help identify overcounts, which are rarer but can occur. Military redeployments may lead to overcounts, for example; other situations include some students who get counted twice while splitting time between home and college, and miscounts of people with second homes or people who experience a stay in a nursing home while also holding a permanent residence.

Ong & Associates, of which Paul Ong is the founder, provided services pro bono for the study.