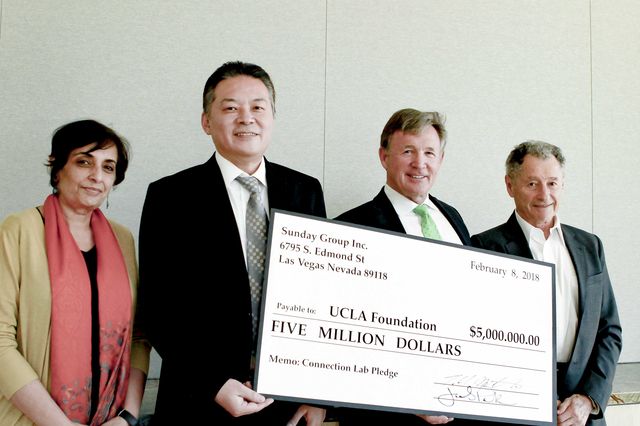 A $5 million gift to the UCLA Samueli School of Engineering in honor of internet pioneer Leonard Kleinrock will establish a new center devoted to shaping the future of the internet and computer networking. The gift from Sunday Group Inc., a Las Vegas-based software company specializing in blockchain technology, will create the UCLA Connection Lab.

Kleinrock, a UCLA distinguished professor of computer science who established the underpinning framework of the internet in the 1960s, will lead the new center.

The Connection Lab will foster interdisciplinary research on a range of technologies, such as blockchain (secure records of digital transactions), computer networks, big data, artificial intelligence, machine learning and the “internet of things.” It will draw inspiration from the school’s foundational role as the birthplace of the internet (video).

The gift will provide resources to recruit and retain top faculty at the lab and will support research conducted by undergraduates, graduate students and postdoctoral scholars. It also will facilitate startups by seeding priority research and connecting members of the lab with industry and government leaders.

“It’s impossible today to consider a world without the internet — this global nervous system plays a major role in every facet of modern society — but indeed that’s where we were before Professor Kleinrock and his team laid the first cornerstone of this network of networks at UCLA,” said James Pack, a director and co-founder of Sunday Group. “Nearly 50 years after that landmark work, we are very excited to see UCLA continue its lead role in the study of emerging connections technologies.”

While a graduate student at the Massachusetts Institute of Technology in the early 1960s, Kleinrock created the mathematical theory of packet switching, which allows different computers to communicate with each other. Five years later, as a UCLA professor, he was asked by the Advanced Research Projects Agency (which later become Defense Advanced Research Projects Agency, or DARPA) to put his theory into practice. 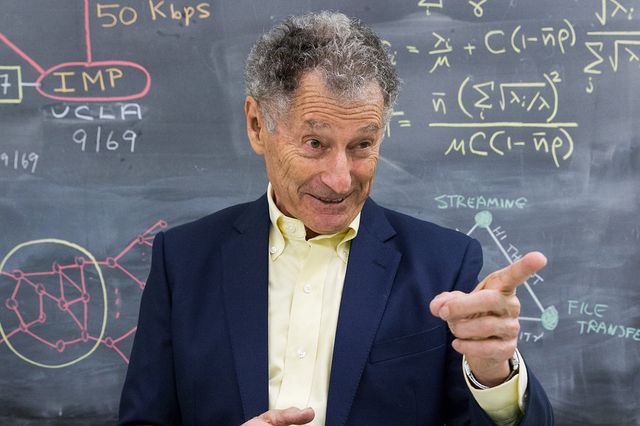 UCLA Samueli
Leonard Kleinrock, who established the underpinning framework of the internet in the 1960s, will lead the new center.

Kleinrock, with a team of select graduate students and others, then launched the network now known as the internet. At 10:30 p.m. on Oct. 29, 1969, the first message on the network was sent from his UCLA laboratory to Stanford Research Institute. Now known as one of the fathers of the internet, Kleinrock has been recognized with many distinguished international honors for his work, including the National Medal of Science, the United States’ highest honor for achievement in the sciences.

“The UCLA Connection Lab is designed to provide an environment that will foster advanced research in innovative technologies at the forefront of all things regarding connectivity and will deliver the benefits from that research to society globally,” Kleinrock said. “The lab’s broad-based agenda will enable faculty, students and visitors to pursue research challenges of their own choosing, without externally imposed constraints on scope or risk.”

The gift will also enhance the Internet Experience, a permanent exhibition that is open to the public. After a renovation, the center — which is located in in 3420 Boelter Hall, the site of Kleinrock’s research laboratory in the 1960s — will tell the story of the internet’s evolution through new exhibits, interactive displays and a virtual reality experience that will be accessible online, around the world.

“Simply put, Professor Kleinrock’s work was essential in giving the world the internet, which has revolutionized our lives,” said Todd Mitsuishi, CEO and co-founder of Sunday Group. “The creation of the UCLA Connection Lab will play an important role in continuing his legacy, and Sunday Group is honored and proud to play a small part in this endeavor.”

Jayathi Murthy, the Ronald and Valerie Sugar Dean of Engineering, said, “I want to thank the Sunday Group for their visionary support​ of​ UCLA​, and of Professor Kleinrock’s exploration ​of ​what the internet can and should be. Len’s leadership ​brings​ an unmatched level of knowledge and scholarship ​to ​this important endeavor. The UCLA Connection Lab will ​help ensure the continued excellence of ​our research enterprise for years to come.”

The gift is part of the $4.2 billion UCLA Centennial Campaign, which is scheduled to conclude in December 2019 during UCLA’s 100th anniversary year. The gift also moves UCLA Samueli Engineering closer to its own campaign goal of $250 million.