UCLA alumna Marilyn Beaudry-Corbett has proven beyond a doubt that it's never too late to pursue one's dreams. She forged a successful corporate career before dramatically changing course in her early 40s to pursue her true vocation, archaeology.

This thrilling "second chapter" led to Beaudry-Corbett's desire to give back to her alma mater. Her transformative gift of $5 million to the UCLA Cotsen Institute of Archaeology establishes two named endowments that address key priorities of UCLA's fundraising efforts: graduate student support and endowed faculty chairs.

The Marilyn Beaudry-Corbett Endowed Graduate Fellowship in Archaeology is a $4 million testamentary pledge and will provide vital support in perpetuity for Cotsen graduate students, with preference given to women aged 30 and over. And the $1 million Marilyn Beaudry-Corbett Endowed Chair in Mesoamerican Archaeology — the first chair in this field at UCLA — ensures that the Cotsen Institute has a robust presence in Mesoamerican archaeology.

Affiliated with the Cotsen Institute since 1977, Beaudry-Corbett is a visiting assistant professor at the institute and its former director of publications. She has contributed her expertise in the production and distribution of archaeological ceramics in Mesoamerica and Central America to numerous excavations throughout that region. She also directs the Cotsen's Ceramics Research Group, which offers practical experience to students and researchers and maintains a dialogue among ceramics specialists at UCLA and the local community. 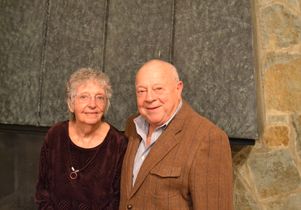 "We are incredibly honored that Marilyn chose the Cotsen as the beneficiary of this gift," said Charles "Chip" Stanish, the Cotsen's director and a professor of anthropology. "She truly understands our need for such large-scale philanthropy, which will help us recruit the best faculty and students. What makes her gift even more meaningful is that she is a treasured colleague, an accomplished scholar in her field and an inspiring mentor."

John Papadopoulos, a professor of classics and archaeology and chair of the Interdepartmental Archaeology Graduate Program at the Cotsen, said, "Marilyn Beaudry-Corbett's generous endowed fellowship will provide funds where they are needed most: student support. Her gift is an investment in generations of young scholars to come and ensures UCLA's leading role among the world's best archaeology programs."

Born and raised in Los Angeles, Beaudry-Corbett earned a bachelor's degree in marketing from the University of Southern California in 1953 and completed a one-year graduate management-training program at Radcliffe College before returning to USC to obtain a master's in industrial sociology in 1961.

In the "Mad Men" era of the mid-1960s, when women were starting to flex their corporate muscles, Beaudry-Corbett joined Audience Studies Inc., a marketing and advertising research firm, and was eventually promoted to chief operating officer. Her job took her all over the world and ignited her passion for travel. As a single professional woman in the early '70s, a poster child for women's liberation, she had conquered the corporate world.

Beaudry-Corbett's "Plan B" turned out to be archaeology, an interest sparked by her participation in UCLA Extension courses. "There was something about discovering how people lived their everyday lives that had always intrigued me, particularly the Mesoamerican cultures," she said.

The same drive and determination that propelled her to corporate success helped her navigate the path to her new career. The first graduate adviser she spoke to was not terribly encouraging, citing her lack of relevant academic credentials.

Undaunted, she stood in line with "real graduate students" outside the office of one of her UCLA instructors, Christopher Donnan, former director of the Fowler Museum at UCLA, emeritus professor of anthropology and a world authority on the Moche of Peru. That day, Donnan gave Beaudry-Corbett the advice and encouragement she needed to pursue her dream.

"Soon after Marilyn's admission to our graduate program," Donnan said, "she became recognized as an outstanding student."

"Jaws dropped at work when I told them about my plans," Beaudry-Corbett said.

Fortunately, her firm employed her as a consultant throughout her studies so that she could continue to support herself. Beaudry-Corbett was one of the first to earn a master's degree in UCLA'a Interdepartmental Program in Archaeology, in 1977, followed by a doctorate in 1983. She was awarded a postdoctoral fellowship at the Smithsonian Institution and spent a year as a Fulbright scholar in La Lima, Honduras.

Donnan is clearly proud of Beaudry-Corbett's achievements, saying, "It has been a great pleasure for me to witness Marilyn's remarkably successful career, as well as her pivotal role in the development of the Cotsen Institute of Archaeology Press."

Beaudry-Corbett's archaeology career has included many highlights, including work on several international field research projects, in conditions that were often primitive. She recalls a site near Copan in Honduras where she worked in 1975: "We were lucky to have showers once a week, and I remember eating beans and rice for dinner many nights in a row."

She brought home one especially beloved souvenir from that project: a black cat named Pedro that she rescued from the streets of San Pedro Sula.

In 1987, while teaching a class in ceramics analysis at UCLA, Beaudry-Corbett met Don Corbett, a dentist by profession who had become hooked on archaeology a few years earlier. Just three months after they started dating, he proposed at a shabby restaurant near the site of an excavation she was leading on the south coast of Guatemala. They spent the second half of their honeymoon in Mexico on a Smithsonian study tour led by Beaudry-Corbett, the first of many shared travel experiences.

Don Corbett served two terms as president of the Cotsen's Friends of Archaeology and continues to be involved in the Ceramics Research Group. After 25 years of marriage, he still marvels at how much he and Beaudry-Corbett have in common.

"Archaeology brought us together, but we also have the same interests in most everything else ... music, travel, wine and food," he said. "We never have a problem deciding what to do."

Beaudry-Corbett considers one of her greatest achievements her co-authorship, with archaeologist John S. Henderson, of the first-ever compendium of Honduran pottery, "Pottery of Prehistoric Honduras." She is equally proud of her work as principal investigator of excavations at Sin Cabezas on the south coast of Guatemala, and at Joya de Ceren in El Salvador, a pre-Columbian Maya farming village dating to approximately 600 C.E., preserved intact under five meters of volcanic ash and now a UNESCO world heritage site. She also worked with cave specialist James Brady in northeast Honduras on the excavation of Talgua cave, also known as "The Cave of the Glowing Skulls" because of the way that light reflects off of the calcite deposits found on the skeletal remains there.

Of her philanthropy, Beaudry-Corbett said, "I am thrilled that my gift will support future archaeologists and the field of Mesoamerican archaeology at the Cotsen, which has given me so much pleasure and professional fulfillment."

Thanks to Beaudry-Corbett's two endowments, her enthusiasm for and dedication to archaeology and the Cotsen Institute will extend far into the future — and its faculty and students will reap the benefits of her generous legacy.