Deep below the Black Hills of South Dakota, in the Sanford Underground Research Facility, the world’s largest dark matter detector has successfully completed its startup operations phase and delivered its first results.

The verdict: The LUX-ZEPLIN, or LZ, which is just beginning its search for the mysterious, elusive particles thought to make up a majority of material in the universe, is the most sensitive dark matter detector in the world, say researchers with the LZ experiment, which is led by Lawrence Berkeley National Laboratory. Their data are published today on the LZ website (PDF) and in the online preprint archive ArXiv.

That high level of sensitivity couldn’t have been achieved without the expertise of UCLA assistant professor of physics Alvine Kamaha and her LZ collaborators. Kamaha, who holds UCLA’s Keith and Cecilia Terasaki Chair in Physical Sciences, co-led the effort to ensure that the massive LZ was free from dust, airborne radon and other surface background contamination throughout the detector assembly process, which lasted more than a year.

“It was like putting more than 40,000 pieces of Legos together under a controlled atmosphere and in a very clean fashion. We had to wear special suits and follow stringent cleanliness protocols,” said Kamaha, who stressed that any contaminants could result in the detector giving fake positive signals. “Even dust in the air we breathe has radioactive particles, and though they’re not harmful to us, they can be for a dark matter detector like LZ, which is supersensitive.”

The work of Kamaha and her colleagues was so successful that only about a single gram of dust lay on the completed detector, which was transported a mile underground to protect it from cosmic radiation during operations.

Kamaha then led the installation and commissioning of all the experiment’s calibration systems, which are used to set baseline readings from the detector as it encounters common, well-known particles so that they won’t be confused with dark matter.

The dark matter particles the LZ is searching for are known as WIMPs, or weakly interacting massive particles, and their discovery would look something like this: A WIMP would pass into the liquid xenon heart of the detector, which is enclosed in two nested titanium tanks, where it would collide with a xenon atom. Powerful light sensors aimed at the tanks would record the flashes of light accompanying this collision. Thanks to the precise calibration of these instruments, the WIMP would be distinguishable from other types of particles based on the unique characteristics of its flashes. 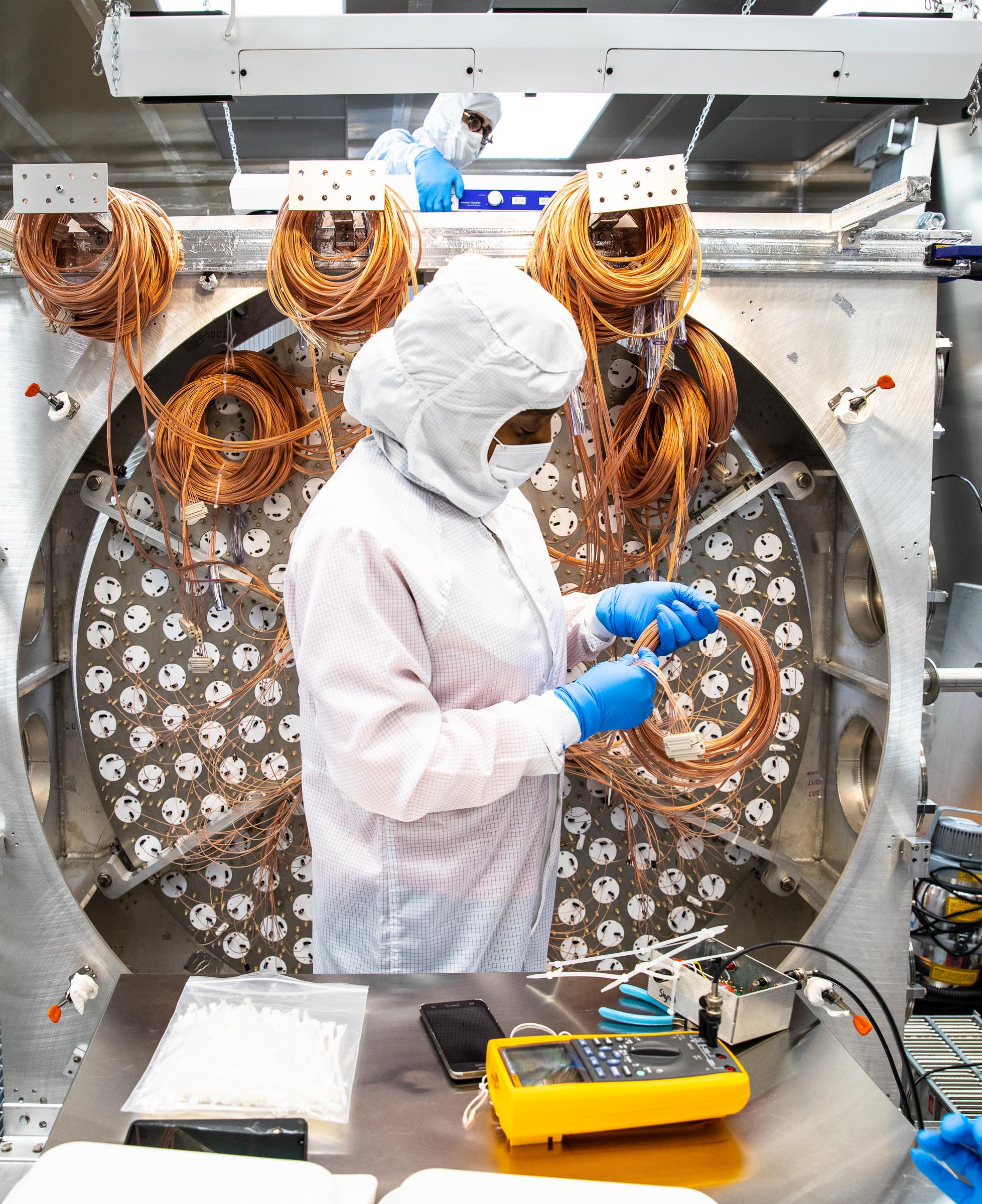 And while dark matter particles have never actually been detected, the countdown to their discovery may have started with today’s data from the LZ’s first 60 “live days” of testing, which occurred over a three-and-a-half–month span that began at the end of December. With confirmation that the LZ and its system are operating successfully, full-scale operations can now begin.

“We plan to collect about 20 times more data in the coming years, so we’re only getting started,” said LZ spokesperson Hugh Lippincott of the University of California, Santa Barbara. “There’s a lot of science to do and it’s very exciting!”

Kamaha agreed that although this initial period of testing did not find dark matter, the run showed that the LZ is the cleanest, most sensitive instrument for detecting WIMP dark matter in the world.

“If we were to find WIMP dark matter in the near future, it will most likely be using LZ,” she said.

The design, manufacturing and installation of the LZ detector involved an international team of 250 scientists and engineers from 35 institutions in the U.S., Europe and Asia and was led by Lawrence Berkeley National Laboratory project director Gil Gilchriese. The LZ’s operations manager is the Berkeley Lab’s Simon Fiorucci.

The LZ experiment is supported by the U.S. Department of Energy and governmental agencies in the U.K., Portugal and South Korea.