Editor’s note: This news release was updated Dec. 10 with a new headline and photographs covering the presentation of the Nobel medal. The video of her medal ceremony was added Dec. 11.

“How do you observe something you can’t see?”

Andrea Ghez, who in October won the 2020 Nobel Prize in physics, answers that question and many others in her Nobel Lecture.

Ghez, UCLA’s Lauren B. Leichtman and Arthur E. Levine Professor of Astrophysics and director of the UCLA Galactic Center Group, shared the prize for her discovery of a supermassive black hole at the center of our galaxy, where the distorting effects of the Earth’s atmosphere made it difficult to see much of anything.

In the talk, Ghez discusses the research she conducted at the W.M. Keck Observatory in Hawaii, which houses the world’s largest telescopes. She also recounts a huge leap forward she made in the 1990s, when she helped to pioneer adaptive optics, a powerful technology that corrects the distorting effects of the Earth’s atmosphere in real time.

And she shares the story of how her initial proposal to conduct the research that led to the Nobel Prize was turned down. “People didn’t think it would work,” she recalled. Ghez wrote another proposal to better explain that it would work.

Her lecture, titled “From the Possibility to the Certainty of a Supermassive Black Hole,” was delivered in UCLA’s Lani Hall. Due to the COVID-19 pandemic, the auditorium was mostly empty at the time. Traditionally, Nobel laureates travel to Stockholm — or Oslo, Norway, in the case of the Peace Prize — to receive their awards. This year, because of the pandemic, their medals are being brought to them.

Ghez received her Nobel diploma and medal Dec. 9 in the backyard of Leichtman and Levine’s home in Beverly Hills. Today, she will participate in a “Nobel Minds” discussion that will stream live on the organization’s website at 12:35 p.m. PST. She also was interviewed about her research for a Nobel Prize podcast. 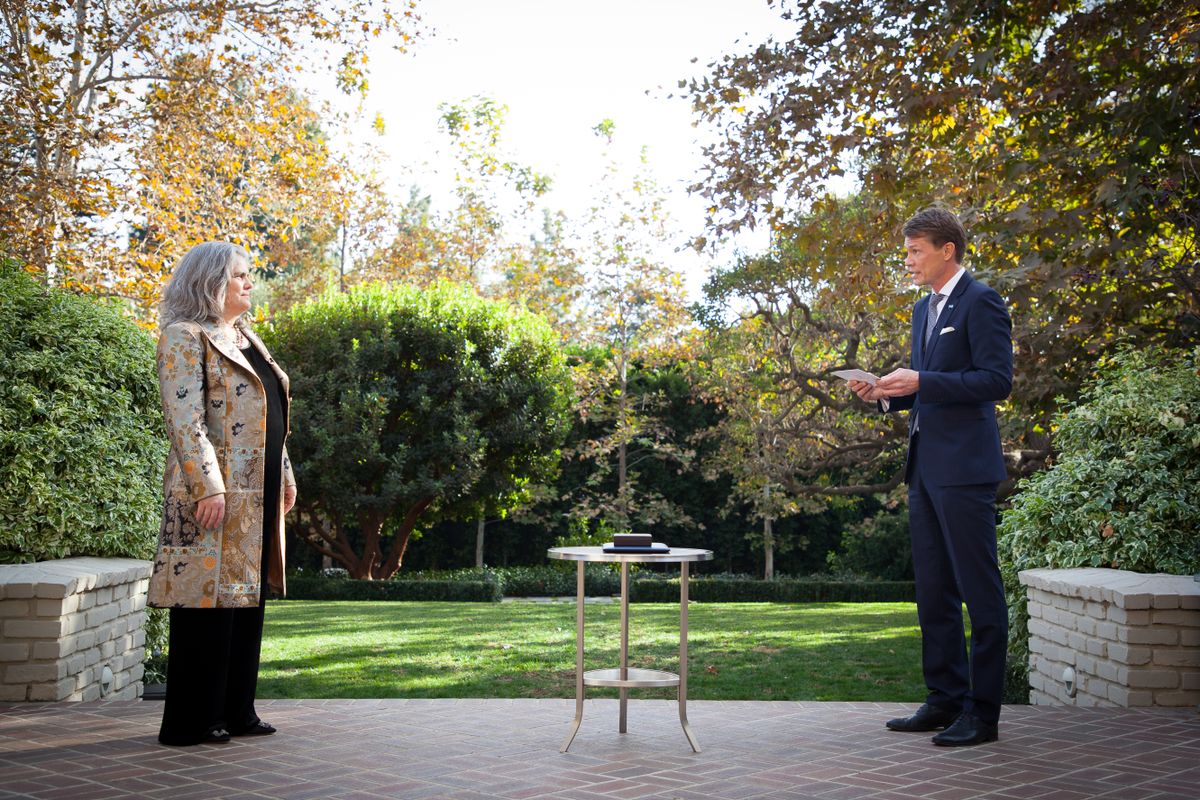 Annette Buhl
Andrea Ghez with Lars-Erik Tindre, representing the Swedish embassy in Washington, D.C., at the presentation of Ghez’s Nobel medal in Beverly Hills on Dec. 9.

Ghez and fellow Nobel laureate Jennifer Doudna, a UC Berkeley professor of biochemistry, will be joined by UCLA Executive Vice Chancellor and Provost Emily Carter for a webinar on Dec. 16 at 9 a.m. PST. They will discuss the science behind their Nobel-winning discoveries, their current research and the significance of their Nobel Prizes for women and young aspiring scientists.

The virtual discussion is free and open to the public, but advance registration is required. Those who are unable to view the event live will be able to watch it later on the UCLA Connections website.

Doudna shared the 2020 Nobel Prize in chemistry for her role in the development of CRISPR-Cas9, a powerful genome editing breakthrough that allows scientists to rewrite DNA in any organism, including human cells.