In the Grassfields region of Cameroon in West Africa, people may dine with their king, but a king never dines with his people. As the center of a kingdom’s economic, spiritual and political life, the Grassfield’s king is unique among men. His exalted position is underscored by the injunction against his consuming food in public. When before his people, he ingests only ancestral substances such as palm wine and special leaves.

“Dining with Kings: Ceremony and Hospitality in the Cameroon Grassfields,” on view at the Fowler Museum at UCLA from Dec. 17 through April 15, 2018, presents stunning examples of Cameroonian ceramics, beadwork, textiles, embroideries and carvings in an installation that explores how the rituals and objects surrounding royal dining and food were about more than mere sustenance.

This intimate study of hospitality in the western area of Cameroon in the 19th and 20th centuries uses examples of royal arts — notable for their use of restricted iconography and prestige materials — to represent ideas about status, diplomacy and hospitality. The exhibition will ask viewers to consider how dining practices establish connections and hierarchies between members of the same society, and how these same practices inform encounters with members of other societies.

“Dining with Kings” is part of the Fowler in Focus series, dedicated to exploring aspects of the museum’s permanent collections in a gallery housed within Intersections: World Arts/Local Lives. 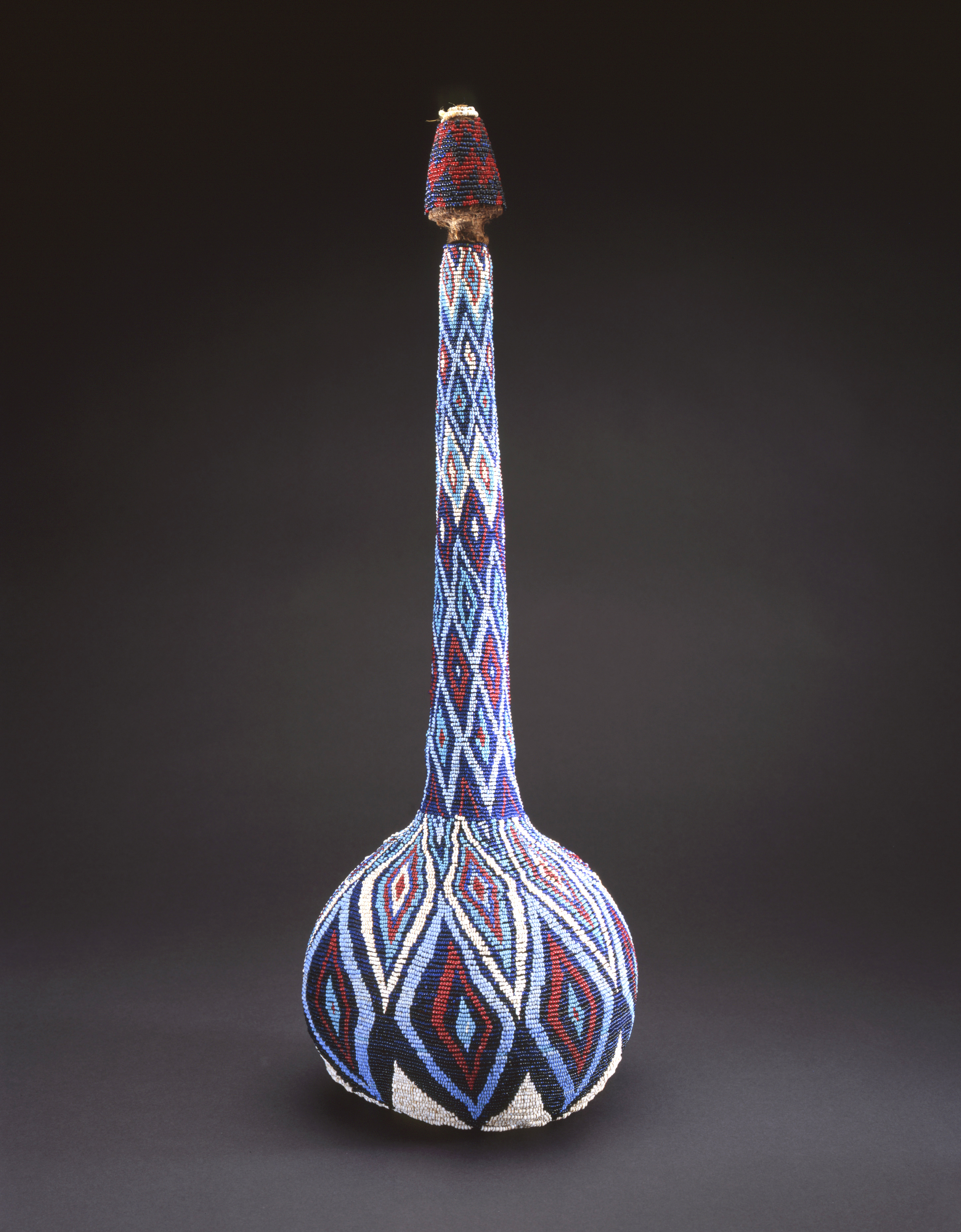 While the king may not eat with others, cooking, drinking and dining are integral parts of ritual life at the palace. In this space, food is laden with meaning and the objects associated with consumption exude power. The 30 vessels in this exhibition show how the care and skill in their creation speaks to their important role within palace culture.

Kings and lineage heads in the Grassfields region are described as vessels, since they contain bodily substances like blood, breath and semen that connect them to the ancestors. This metaphoric connection extends to containers of sacred consumables, such as decorated palm wine gourds and carved drinking horns that are regarded as extensions of the king’s physical being. Beyond their connection to the king’s spiritual power, vessels for food and drink are essential indicators of status in the palace. Completely covered with elaborate patterns of colorful glass beads imported from Europe, the palm wine gourds add the prestige of foreign goods and broadcast the king’s wealth with vivid displays of artistry.

Also featured in the exhibition is a selection of rare, embroidered cotton tablecloths and napkins given to the Fowler Museum by Chicago-born writer Mary Hastings Bradley, who had visited the Grasslands kingdom of Bamum in 1931. There, King Ibrahim Njoya had been on the throne for more than 40 years and never missed an opportunity to act as a gracious host, indulging his visitors’ desire to acquire high-quality objects. His gifts served as ambassadors for the Bamum kingdom in Europe and elsewhere. The elaborately embroidered table linens he gifted to Hastings Bradley masterfully combine Bamum iconography with a European dining tradition, and speak to the vibrancy of Grassfields culture. Through these textiles and the other vessels on display, “Dining with Kings” makes the important point that Grassfields cultures were never static, but rather adopted new practices while still maintaining old ones.

“Dining with Kings: Ceremony and Hospitality in the Cameroon Grassfields” is organized by the Fowler Museum at UCLA and is curated by Erica Jones, the Fowler Museum’s associate curator of African arts.