The next time you’re walking or biking in a city, take a look around — you may be able to get a sense of air quality by how the buildings are laid out.

When buildings are aligned in rows with no gaps between them, pedestrians are usually exposed to higher concentrations of vehicle-related, ultrafine particles that harm human health, according to a study co-authored by UCLA air quality expert Suzanne Paulson.

“It turns out that the most important factor for determining how severe street level pollution will be is whether there is space between buildings,” said Paulson, a professor of atmospheric and oceanic sciences and a member of the UCLA Institute of the Environment and Sustainability. It didn’t matter whether that empty space was green space or parking lots; just that the open space allows air to circulate and clear out the pollution.

To simulate the effect that wind blowing through the layout would have on the circulation of air pollution, the scientists used a computer model that was created to predict the dispersal of biological weapons, which have particles about the same size as ultrafine pollution. In the scenarios they used, buildings were 10 to 12 stories high and covered a quarter of a city block.

The arrangement that led to the highest accumulation of street-level pollution was buildings in rows. Pollution was about 50% higher than in the checkerboard pattern, which created the least pollution of the layouts studied — because, the researchers wrote, open space on each side of each building would allow wind to circulate and clear the air. The cluster arrangement performed substantially better than rows, but the model showed that pollution would still accumulate in some places.

The paper, published in ScienceDirect, also examined a variation on the three layouts, placing  shorter buildings instead of empty space among the tall buildings. The models showed that more pollution would accumulate with the short buildings than without them, but the differences among the three basic layouts were less dramatic. 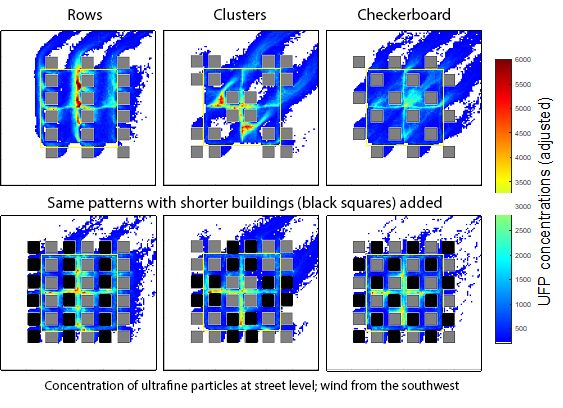 ScienceDirect, modified by UCLA
Researchers studied three building layouts — in tight rows, in clusters and in a checkerboard pattern — with and without shorter buildings (black squares in bottom row).

Another finding was that pollution would be worst at street level but would be more dispersed as elevation increases, up to about 10 meters (around 33 feet) — at which point the concentration of pollutants is about the same as it would be in the city environment in general. That finding could be important to people living in tall apartment buildings.

“I often have people ask me things like ‘I live on the 12th floor, am I going to be OK?’” Paulson said. “This research shows that even the fourth or fifth floor is fine.”

Ultrafine particles are particulate matter smaller than 0.1 micrometer in diameter (an average human hair is about 100 micrometers wide). They are associated with a slew of serious health problems, including respiratory diseases, heart attacks, strokes and cancer, as well as developmental problems in children. Still, governments around the world generally don’t regulate ultrafine particles at the source of the pollution.

And although gas-powered vehicles are a major source of pollution, Paulson said that even if most or all vehicles went electric, ultrafine and larger particles from tires, brakes or other sources would still accumulate and cause health problems.

The paper’s findings could help guide urban planners, building owners and other decision-makers, particularly in rapidly developing cities — places like Beijing, China, and Dhaka, Bangladesh. Planners in already-developed cities such as Los Angeles or Chicago could adopt the same lessons for new construction projects, but Paulson noted it would be harder for them to implement changes until older buildings in densely built blocks are demolished.

While building vertically instead of sideways might seem like one way to improve air quality at street level, the way many of today’s skyscrapers are designed — “wedding cake” style, with parking garages taking up more space at street level and then a slimmer profile for higher stories — erases the benefit. Such buildings still inhibit air circulation at street level, Paulson said.

In future studies, Paulson plans to examine the effects of other factors, such as the presence or absence of trees, on street-level pollution.