Before Eric Alejo enrolled as an eighth-grader at the UCLA Community School in Los Angeles’ Koreatown, he never figured he would go to college. But he was inspired when his teachers didn’t ask if he would continue his education — they asked where.

“The teachers here really know you, and they push you toward going to college,” said Alejo, now a high school senior. 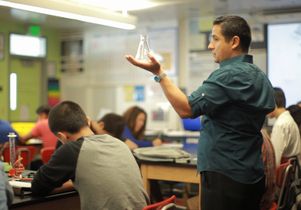 Science lead teacher Pedro De Leon quizzes students on the lab equipment they will be using.

Working with volunteers from UCLA, teachers at the Community School are focused on ensuring students are qualified to apply to a University of California campus — steering them to the college prep classes they need and making certain they know the deadlines for registering for PSATs and SATs. This fall, the school will also hold a pizza party where the seniors can begin their college applications with guidance from academic counselors and teachers.

So although it’s not time for Alejo to fill out those forms or write his personal statement just yet, his self-assurance when speaking about his college plans shows in his confident phrasing: “I’m the first one in my family to go to college. I’m also the first to graduate high school.”

Alejo’s story represents a remarkable shift brought about by the Community School, a K-12 school created through a partnership between UCLA’s Graduate School of Education and Information Studies, the Los Angeles Unified School District and several community organizations.

Before the school opened in September 2009 and the high school opened in 2010, only one-third of the high school graduates in the area now served by the school went on to attend college. Now, as the school celebrates its fifth anniversary, that percentage has increased almost threefold. In June, the first group of seniors who spent all four years at the high school graduated. Of them, 95 percent plan to attend college this fall, more than half were admitted to four-year schools (up from 13 percent in 2009) and one-quarter were admitted to UC campuses (up from 4 percent).

The students aren’t hand-picked to skew those stats. Students are zoned to the school the same way students are zoned to any other LAUSD school. They come from the largely Hispanic and Asian immigrant communities of the Pico-Union and Koreatown neighborhoods. More than three-quarters are economically disadvantaged and only 6 percent of their parents are college graduates.

The key to the school’s success, explained math teacher Maria Nakis, is its personalized approach.

“I’ve developed much closer relationships with these students than at any other school where I’ve worked, because even if they’re not in my class, I’ve seen them all every day for four years,” she said.

“My sisters went to a really big school and said they were just a number,” Nuñez-Gil said. “When I came here, it felt right.… You know your teachers and you know everyone around you.”

One reason is that each student is part of a small group called an advisory, a class of about 20 students that meets three times a week for two years, first as freshmen and sophomores and again as juniors and seniors. Advisors — teachers like Nakis — keep tabs on their grades and discipline in other classes and how things are going at home. Instead of a single-class snapshot, they get a view of the whole student. If a student starts to slip, the advisor catches it in time to help them bring their grades up.

And students generally feel comfortable approaching their advisors about any problems they might have, said Pedro De Leon, the high school’s lead science teacher.

“They know they have someone they can depend on outside the home,” De Leon said. “Students will ask me for personal advice they might normally ask a parent for, because we have that trust.”

The students face a lot of pressures — including gangs, drugs and bullying — outside of school, and many of them only feel safe on campus, De Leon said.

“This school is a lot safer than the one I used to go to,” said senior Jeffrey Hayes. “It’s not the typical school you see on TV with the bullies and the mean girls.… It’s a community.”

Hayes said he began taking school more seriously the year before he enrolled at the Community School, but until then he had never even considered applying to community colleges. Now he hopes to major in business at UC Berkeley.

“Before I came here, I didn’t feel like college was an option,” Hayes said. “I just thought about completing high school.”

As a pilot school with an unusual agreement with United Teachers Los Angeles, the Community School has autonomy over its budget, staffing and curriculum, giving teachers latitude to bring innovative approaches to their classrooms.

Each year, more than 200 UCLA faculty, staff and students get involved at the UCLA Community School — for example, by mentoring and tutoring, teaching after-school enrichment classes, helping develop the curriculum. In the past five years, Bruins have logged more than 30,000 hours of service and worked on more than 30 research studies related to the school. More than 25 UCLA departments and initiatives have participated, including the Graduate School of Education and Information Studies (GSEIS), Center X, the School of the Arts and Architecture, the Center for Community Learning and the office of government and community relations.

In addition to providing a cutting-edge education for Community School students, UCLA’s involvement is producing insights for UCLA faculty that ultimately could help improve education throughout Los Angeles and around the country.

Marcelo Suárez-Orozco, dean of GSEIS, noted that this school year marks the first time that a majority of students in U.S. public schools are from racial and ethnic minorities. “Los Angeles has been at the head of this new normal in our country’s demographic future,” he said. “Working to improve educational opportunities for Community School students is an especially important endeavor, given that the fastest-growing demographic are children from the low-income immigrant families we serve.

“Our students are at the heart of the new ‘minority-majority’ in America, and it is essential they be well-prepared and productive, engaged and ethical citizens, to better lead us into the 21st century.”

The high school offers unusual electives — navigation, robotics, music theory, sailing and entomology among them — that expose students to new interests and career possibilities, and twelfth-graders interview for internships with an array of nonprofits that have partnerships with the school. Many students write their college application essays about their internships at UCLA research labs, AIDS Project Los Angeles and other prominent organizations.

“We want them to explore,” said lead English teacher Jason Torres-Rangel. “UCLA graduate students have studied our elective seminars and shown that they open students’ eyes to careers they didn’t know about. And that motivates them to go to college.”

Students are finding that kind of motivation wherever they look. Senior Ana Castro was a self-described troublemaker who cut classes at her previous school. She credits her one-on-one time with her Community School teachers for helping her buckle down and get motivated to get a degree.

“It’s not like ‘I want to’ – I know I’m going to college,” said Castro, who was inspired by the school’s field trips to college campuses. “Now I want to be like the other people going to college. I want to have my own adventure, start my own journey.”