As the world’s oceans heat up with climate change, coral reefs are increasingly under threat. Bleaching events — defense mechanisms against high temperatures that turn corals white — have become more frequent.

From 2010 to 2016, UCLA researchers studied corals off the coast of American Samoa in the South Pacific Ocean to better understand the bleaching process and what it means for the future of these iconic places.

Looking at four similar species of coral, a recently published study found that some corals are more resilient than others — but the resilience comes at a cost: They grow more slowly, making reef recovery a longer process. 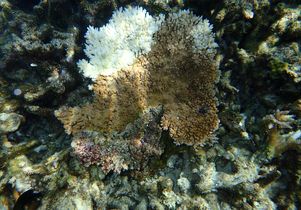 Zack Gold/UCLA
A coral colony that bleached during the 2015 El Niño event.

Coral reefs are home to about a quarter of all marine life. Protecting them is critical not only to conserve ecosystems, but also to maintain tourism, fishing, and a major source of food for more than a billion people worldwide, said Zack Gold, a doctoral candidate in UCLA Professor Paul Barber’s lab and lead author of the study.

“You have 261 million people in Indonesia alone who are dependent on seafood for the vast majority of their protein,” Gold said. “Losing that would be huge. It’s a security issue.”

Corals are made up of two types of species working together: invertebrate anemone-like animals and single-celled algae. The invertebrates take the form of polyps and live together in colonies made up of thousands or millions of individual organisms. The algae live inside those organisms’ tissues, where they are protected and given nutrients. In return, the animals get up to 90 percent of their food from the algae in the form of sugars produced by photosynthesis — the solar-powered process by which plants and other organisms create food from water and carbon dioxide.

When ocean temperatures rise above 93 degrees or so for an extended period of time, the photosynthesis process breaks down and algae begin producing chemicals that are unhealthy to the corals, Gold said. In response, the corals reject and expel the algae. Because the algae give corals most of their color, the process turns reefs a ghostly white.

Expelling algae protects corals over the short term, but it deprives them of their primary food source, Gold said. Many never recover, and the ones that do take up to one year to return to a normal rate of growth after temperatures go back down, the study found.

That means that when a reef experiences multiple bleaching events in a couple of years, as Australia’s Great Barrier Reef did in 2016 and 2017, corals don’t have enough time to return to a normal growth rate. 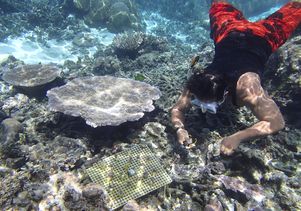 The UCLA study began in 2010 in a marine protected area off the coast of American Samoa. Gold and his fellow researchers would get up in the morning, grab their fins, masks and snorkels, and ride bikes to the coast. Once in the water, they tagged, mapped, photographed and measured corals in two sample plots, each about the size of a football field. “Some were easy to get to,” Gold said. “Others were really shallow even at high tide, so you’d have to swim or crawl out in three inches of water to find them and take pictures.”

The researchers collected and analyzed data over the next six years.

“We lost 70 percent of the corals we were following,” Gold said. Some survived, but didn’t fully recover until February 2016.

The study also found that resilient species grow more slowly and have thicker skeletons. Gold hypothesized that there may be a tradeoff — generating thicker skeletons requires more energy and might limit their rate of growth.

Slower growth has consequences. It makes the species less likely to be able to keep up with sea level rise, Gold said. Coral reefs can “drown” if they get too far below the surface, lacking enough sunlight to do photosynthesis. These consequences are compounded by other stresses facing the reefs, including hurricanes, overfishing and nutrient runoff from coastal development and farming.

Globally, oceans were hotter in 2017 than any year in recorded history. The UCLA study indicates that as the world continues warming with climate change, coral reefs are likely to grow more slowly.

That’s critically important for the 500 or so people living on the twin volcanic islands of Ofu‑Olosega, where the UCLA study took place.